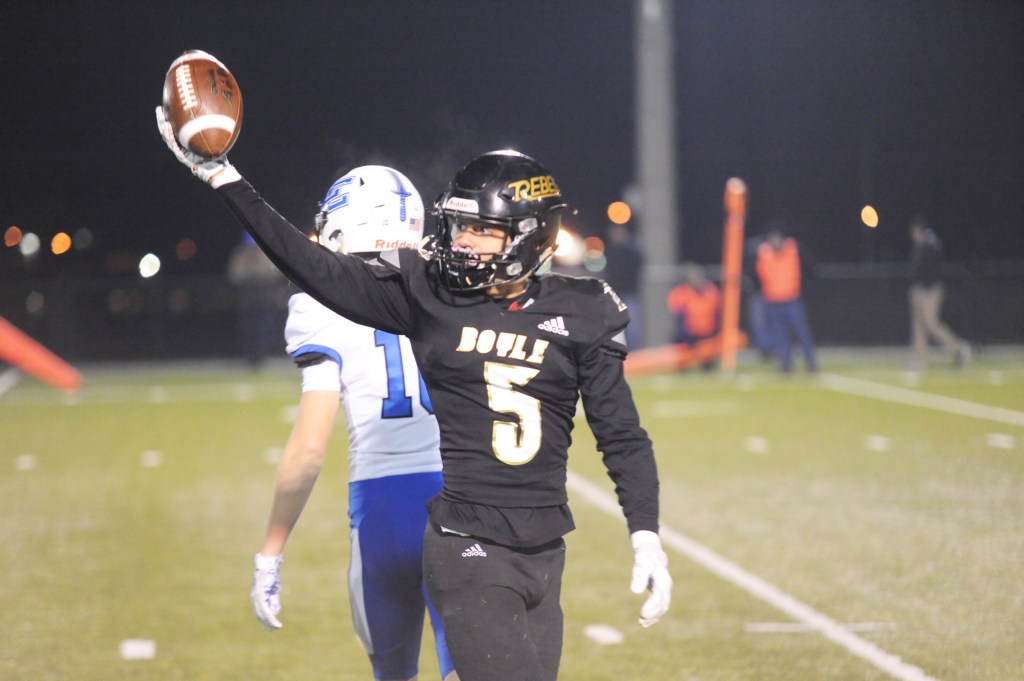 Cash Logan comes out of the pile with the fifth straight recovered fumble for the Rebels. (Photo Derek Brightwell)

Earlier this week, coach Chuck Smith said that to beat Lexington Catholic a second again his defense would need to step up and play better.

They took that challenge.

The first five possessions for Lexington Catholic ended with fumbles recovered by the Rebels, and Boyle was able to turn all but one of them into a touchdown. In the second half, it was the pair of star defensive backs — Reese Smith and Landen Bartleson — to join the takeaway party with interceptions. Smith took his 65 yards for a touchdown and set the school record for interceptions in a career, passing Jacob Tamme.

“All the credit to the D-line. They were pressuring Beau (Allen) all night. We were sending the blitz and they were in the backfield the whole game,” Reese Smith said about the defensive performance. “It made a DBs job a lot easier. They let me get that pick with their pressure and after that, it was off to the races.

“It’s awesome. I looked up to Jake when I was a kid,” he added about the record. “Watching him play on TV and all that. Getting to break his record is just an honor.”

Bartleson got his in the end zone to kill the last drive the Knights put together.

All of it led to a 54-7 drumming in the district championship.

Boyle started with the ball and set the tone immediately. Instead of going for the instant touchdown like normal, the Rebels went covered 63 yards on five plays before Reese Smith caught his first pass of the game — a 9-yard slant from Reed Lanter — for his first touchdown since leaving the Bourbon County game with an ankle injury.

“It’s amazing. You don’t realize how much you miss it until you get back out there,” Smith said about being back on the field. “It felt amazing to be back out there with my brothers. 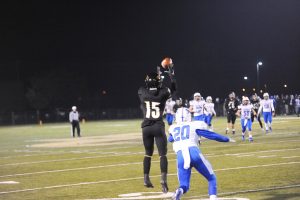 Reese Smith’s came up big in his comeback, leading the team with 109 receiving yards and two touchdowns. (Photo Derek Brightwell)

“I wasn’t expecting to get one. If it comes, it comes,” he added about the score. “Getting our first touchdown tonight, it felt good. After that, we started rolling.”

“He’s our Mr. Football. He really is. He’s such a good player,” coach Smith said laughing. “You can’t substitute for him. Not only is he a really good player, but he’s a leader too. Everybody really rallies around him.”

Beau Allen was swallowed up by the Rebels’ blitz and Isaac Hardwick got the ball out of his hands. Ezarious Roller fell on it at midfield to give it back to Boyle.

Once again, Reese Smith came up big with a diving catch with the LexCath defensive back JD Woodall draped all over him to put it at the 2-yard line. Will McDaniel punched it in and the Rebels were up 14-0.

Once again, a Rebel strip sack — this time freshman Tommy Zeismer was the culprit — was recovered by the defense — Wilson Kelly this time who rumbled nine yards to the 10-yard line.

It looked like Boyle wasn’t going to be able to capitalize on the good field position when multiple penalties backed the line of scrimmage up to the 25-yard line, but Lanter found his brother, Cole, for a 25 yard score. But on what has been an automatic extra point all year for the Rebels, Jackson Smith’s kick was blocked, ending his perfect season at 71 PATs.

The third Knight fumble was after a completion by Allen, and was recovered by Cole Lanter, fresh off his touchdown, to put the ball at Boyle’s 43. However, the Rebel offense got behind the chains for the second consecutive drive and two straight Reed Lanter passes to Bartleson fell incomplete to give the ball back to Lexington Catholic on downs.

And once again, the Knights gave it back when McDaniel forced another fumble and Roller got his second recovery of the game.

And again, Reese Smith made an impressive leaping catch over Woodall, and broke two tackles before being tripped up at the 2-yard line. Andrew Sacco would take it from there, getting his first touchdown of the game. Boyle would go for two to try to make up the blocked PAT from earlier, but the pass was batted down and the score was 26-0. 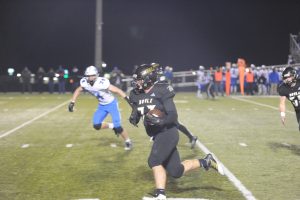 Wilson Kelly scoops up the Beau Allen fumble and runs nine yards with it to put the ball on the Rebel 10 in the first quarter of Friday night’s win. (Photo Derek Brightwell)

And on the ensuing kickoff, the Knights decided to forego the formality of having the offense fumble, as they put the ball on the turf on the return. Cash Logan came out of the pile with the ball and McDaniel got his second TD of the game, this time from five yards out. Jackson Smith put it safely through the uprights to go up 33-0.

Despite jumping out to a big lead in the first half, and forcing five straight fumbles, coach Smith still didn’t feel comfortable on the sideline.

“Not with their offense. They can score easily. I stay nervous until the clock runs out.”

After an unsportsmanlike conduct penalty put the ensuing kickoff on the 50, Boyle went for the onside kick with a chance to get the running clock. The ball bounced around off of Knights players before going out of bounds on the 12-yard line. The first drive the Knights had that didn’t end on a fumble didn’t go much better, as it lasted six plays and ended on a failed fourth down conversion attempt.

Boyle would earn that running clock before the end of the half when Reese Smith reached over the defender’s head and got his feet down along the sideline for one of the best catches of the year.

After Smith’s pick-six made it 47-0, Catholic finally got on the scoreboard when Allen connected with Jackson Corbett for a 23-yard pass and an impressive sliding catch in the back of the end zone. Sacco tacked on a 5-yard TD to push the lead back to 47 and the 54-7 difference was where the score remained after Bartleson’s INT took the Knights off the field for good.

The Rebels physically dominated the game, outrushing the Knights 218 to -25. That is a difference of 243 yards rushing. The passing numbers were a little closer, with Lanter completing 11-13 for 238 yards and three touchdowns compared to Allen’s 14-25 for 226 with a touchdown and two picks.

“I thought we made it a really physical game and that’s what we wanted to do. We play really well when we’re physical,” coach Smith said. Defensively, we played really well. Our front got to him. They really pinned their ears back and got at him. Of course, offensively, we’ve been on point the whole season, but they were really sharp tonight.”

Sacco led the way in rushing for the Rebels with 114 yards and the two scores. McDaniel was behind him with 76 yards and the same touchdown total. Smith’s 109 yards receiving and two TDs were tops on the team, while Reiley Colwick finished just three yards shy of 100.

“Sunday we watch film and Monday we get to work,” Reese Smith said. “We’ll prepare just like we do with anybody. If you don’t come ready to work, anybody can knock you off.”

“They don’t know us and we don’t know them. It’ll be interesting,” coach Smith added.