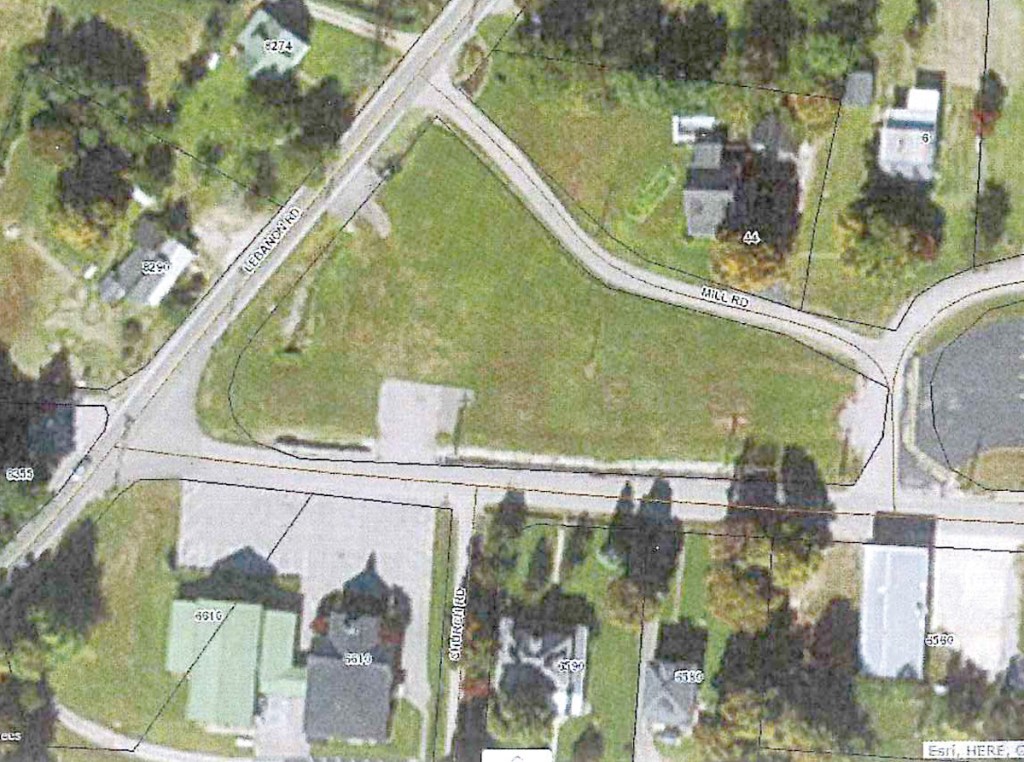 An aerial photo shows the triangular-shaped property in Parksville where a Dollar General is planned. (Image from Danville-Boyle County Planning and Zoning)

Plans for a Dollar General in Parksville can move forward after the developer was granted a variance along Mill Road.

The Danville-Boyle County Board of Adjustments voted unanimously to approve the variance Wednesday, after a lengthy public hearing featuring attorneys arguing both for both sides.

The Dollar General is planned for a triangular piece of land bordered on all sides by roads — Ky. 34 on the west, Ky. 300 on the south, Cemetery Road on the east and Mill Road on the north. 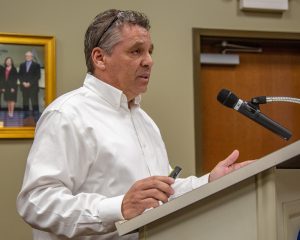 P&Z Director Steve Hunter explains the reasons for a variance request for a Dollar General planned in Parksville. (Photo by Ben Kleppinger)

Zoning director Steve Hunter told the board the local zoning ordinance requires front-yard setbacks of 20 feet on all sides of a property that touch a roadway, which means this property is in the unique situation of having a “front yard” on all four sides. Those setbacks constrain where buildings can be placed much more than on other properties, Hunter said.

“It’s unique to me because I’ve never seen four front-yard setbacks. I have seen three,” said Hunter, who noted the Cattleman’s restaurant in Danville is a recent example of a property with roads on three sides.

Attorney Stephen Dexter argued for the applicant, KY Lodging and Development Co. in Corbin. Dexter said Hunter was right about how unique the property is. 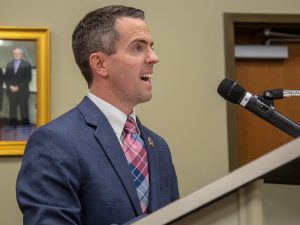 Stephen Dexter, an attorney representing KY Lodging & Development Co. Inc. out of Corbin, argues in favor of the variance. (Photo by Ben Kleppinger)

“There is no other parcel in Boyle County has this same requirement. Zip, zero, nada,” Dexter said. “… It’s highly unique.”

The developer’s preferred plan for the Dollar General meets the 20-foot setbacks on three sides, and most of the fourth side. But the northeast corner of the new store would be 4 feet from the right-of-way on Mill Street.

Hunter said the zoning office has fielded a lot of calls about the plan and heard from a lot of people who are opposed to it. But Wednesday’s variance hearing had nothing to do with zoning — the property is already zoned for commercial use — or site development; it was only held to address whether allowing the variance for the corner of the building would be safe, explained board Chair Virgie Johnson.

“I don’t mean to sound rude, but we can only consider comments regarding the variance,” Johnson told the large group of people in attendance. 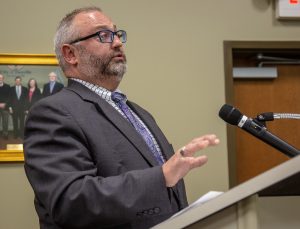 Brian Bailey, an attorney representing a couple who lives across the street from the proposed Dollar General location, argues against the variance. (Photo by Ben Kleppinger)

Brian Bailey, an attorney representing Jeff and Dana Lawhorn, argued having the corner of the building so close to Mill Road — a 12-foot-wide, one-lane road — would make it impossible for semi-trucks coming to Dollar General to turn into the loading area without driving through the Lawhorns’ front yard.

Even if semi-trucks weren’t supposed to turn into the Dollar General from Mill Road, they still could, and damaging the Lawhorns’ front yard would be the only way to do it, he argued.

Bailey said the developer could opt for a different layout that wouldn’t place the corner so close to the road.

“Safety is a concern for me because you’re putting trucks on a road that was never designed to hold big trucks,” Dana Lawhorn testified.

But Dexter argued whether or not the variance is granted, semi-trucks would be driving on Mill Road, and whether that’s a safety concern or not would be something for the county engineer to deal with, not the Board of Adjustments.

“Your decision today can’t be contingent upon tractor-trailer traffic on Mill Road,” Dexter claimed. “… Larger safety concerns are inappropriate” for the board to consider.

Will Stevens, the engineer for the project, told board members there is an alternate layout plan for the Dollar General that would meet all four front-yard setbacks. But it would require much more work to fill in deep ditches on the property; require less aesthetically pleasing retaining walls; and it would back an entire side of the building up against the 20-foot setback on Mill Road, rather than having just the corner of the building near the road, he said.

Further, Stevens said the planned traffic flow for trucks coming to the Dollar General would have them turning onto the property from Ky. 300 on the south, then leaving by turning right onto Mill Road to the north — a turn that wouldn’t take the trucks past the corner of the building in question.

Stevens and others agreed that “hardscaping” and signage could be used to ensure trucks would be unable to use Mill Road to turn into the loading area, and that trucks would only be able to turn right onto Mill Road from the store.

After lengthy discussion board member Dan Campbell ultimately made the motion to approve the variance, conditional on the developer using hardscaping — with approval of the county engineer — to ensure truck traffic only flows in the desired directions. Board member Preston Miles seconded the motion and it passed unanimously.

Hunter said the next steps for the Dollar General project are obtaining a zoning permit locally and a building permit from the state.