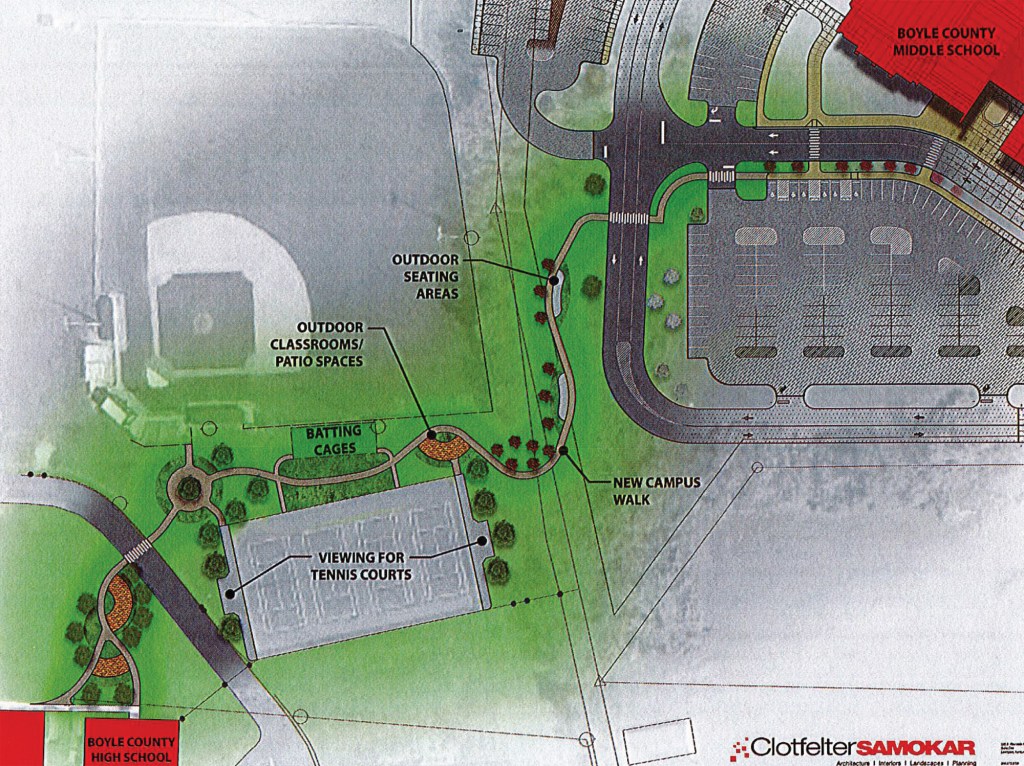 A conceptual drawing shows the kind of sidewalk project Boyle County Schools officials are talking about constructing between Boyle County High School (bottom left corner) and the new theater being built as part of the new Boyle County Middle School (top right corner). The drawing is not an actual plan yet; and no cost estimate has been conducted. (Graphic by Clotfelter Samokar architects)

A planned connector road that is part of the new Boyle County Middle School project will cost nearly $230,000 less than the school district had anticipated.

The lowest bid to build the road came in at $471,400 from Earth Works LLC, a company that has already been doing work for the general contractor building the middle school, said Superintendent Mike LaFavers.

Two weeks ago, before the bids were opened, the district was estimating the project could cost as much as $700,000.

The school district benefitted from a competitive bid environment — it received five bids for the project, he said.

Thanks to the lower cost, the district has now put into its budget plans funding for new Woodlawn Elementary playgrounds, which hadn’t been a sure thing before. Now, Woodlawn will get the playgrounds and the district will still be in as good or better financial shape than it was before, LaFavers said. 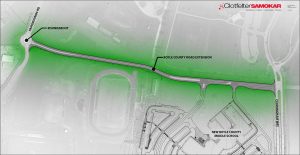 A conceptual plan shows the connector road planned for the north side of the new Boyle County Middle School project. (Graphic by Clotfelter Samokar architects)

The planned road will connect a roundabout near Woodlawn on the side of the central Boyle Schools campus near the Danville bypass with Cunningham Drive, the main entrance road for Millennium Park.

The new middle school will have two entrance gates off of the road, but the road itself will be a regular, public road that people can use to access Millennium quickly from the bypass area, LaFavers said.

The project also includes two “alternates” — modifications to move utilities in the area underground instead of having them overhead. Earth Works LLC will complete those modifications for an additional $114,700. But LaFavers said those utility modifications were requested by the City of Danville because the city believes underground utilities greatly enhance the possibilities for development of the adjacent Boyle County Fairgrounds property, which the city recently purchased. Danville is expected to pay the cost for those modifications, not the school board, he said.

The Boyle County Board of Education voted to accept the low bid for the road; and to accept the bids for the alternates, contingent upon the City of Danville agreeing to pay those costs.

LaFavers and architect Ben Boggs also showed board members a conceptual plan for a sidewalk that would provide a connection for pedestrians between Boyle County High School and the new theater being built as part of the new middle school.

“This is very conceptual; this is just to start discussions,” Boggs cautioned.

The idea would be to create a winding sidewalk from the northeast corner of the high school to the theater area of the middle school, with features like seating areas and shade trees that would make it feel like a “college path,” Boggs said. There could also be multiple patio areas along the sidewalk that could serve as outdoor classroom spaces or areas to gather outside the nearby athletic facilities, he said.

LaFavers said, “the theater is for everyone,” not just the middle school; and plenty of high-school students will be using the theater space.

“I do think if we open this beautiful new theater and high-school students don’t have an easy way to get over there, that would be unfortunate,” LaFavers said. “… We would be missing an opportunity.”

More design work must be done before a cost estimate for the sidewalk project would be available, LaFavers said.

Board members Laura Guerrant, Ruth Ann Elliott, Jennifer Newby and Jesse Johnson all said they liked the concept; board member Steve Tamme said he had “no comment.”