Rebels shut down and shut out Eagles 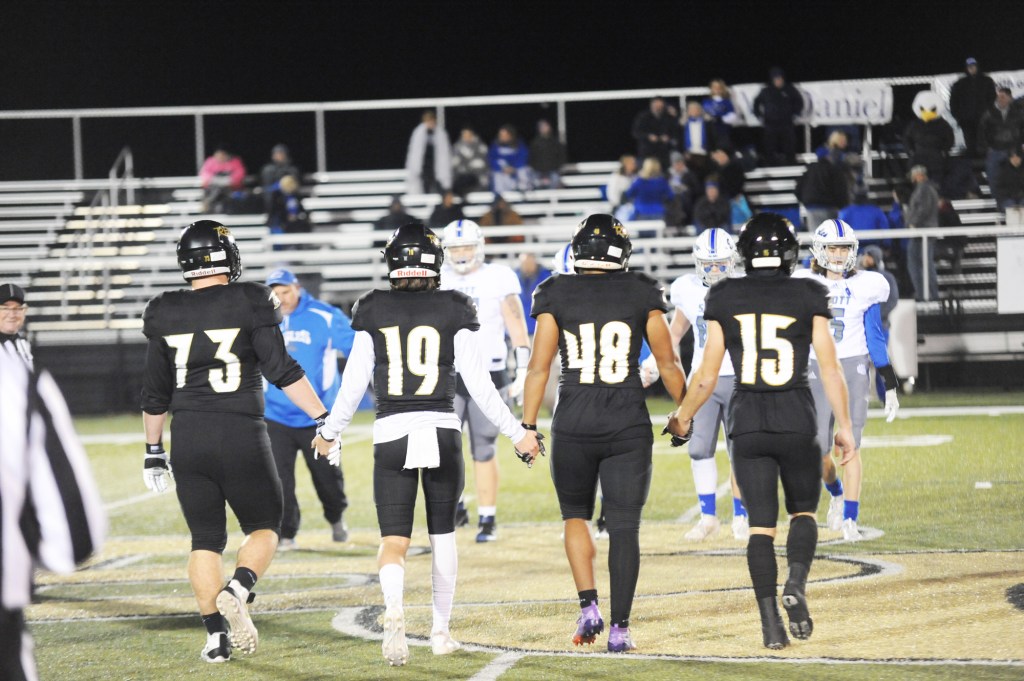 Lanter said he talked with "everyone he needed to" in the offseason, including teammates like Reese Smith (15). (Photo Derek Brightwell)

For the 12th time in 13 games, the Rebels earned the running clock in their 55-0 blowout of Scott High School. Like many of the others, this one came in the first half.

After a Scott three and out and a bad punt gave the Rebels the ball at the 30-yard line, it only took three plays to reach the end zone with Andrew Sacco bursting through the hole for a 21-yard score.

Sacco has been a hard-nosed runner all year and that score marked his 10th of the season, giving the Rebels three backs with double digit scores — alongside Will McDaniel and Landen Bartleson.

“I’ve grown up with them for about six or seven years,” senior receiver Reiley Colwick said of the trio. “They’ve always been the best backs I’ve seen. Those three could go against anybody in the state.”

A similar drive — but a better punt — put Boyle on their own 38-yard line, but the ensuing drive only took one play for the Rebels to go up 14-0.

Reed Lanter hit receiver Reese Smith on a quick pass that Smith took down the sideline and with one cut to get by the defender was off to the races where he outsprinted everyone for his 60th career receiving touchdown — putting him third all time in KHSAA record book.

The next Boyle drive was almost identical. But this time it was Bartleson taking a screen from Lanter and out running everyone for a 71-yard score. 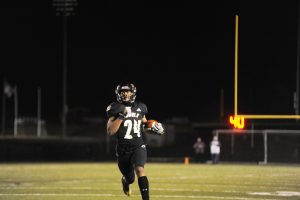 Bartleson had two long touchdowns, one a reception and one a run on a reverse. (Photo Derek Brightwell)

“We did a great job of making plays after we caught it,” Boyle County coach Chuck Smith said. “Every one of our receivers caught short passes and made people miss and turned it into something big. It makes it easy to coach.”

“We’ve had some position flips with some injuries so I got to tap into the wide receiver category a little bit,” Bartleson said. “Getting my hands on the ball for some receiving touchdowns has been fun.”

Bartleson kept the fun going when he picked off Scott QB Gus Howlett’s pass off of a deflection to give the ball back to the Rebels. Lanter picked up his third TD of the game when he hit Cam Yates on a quick out to go up 28-0 with over a minute to play in the first quarter.

On the first play of the second quarter, Reese Smith added to his school interceptions record and then inched closer to the KHSAA career touchdowns record when he took Lanter’s pass, broke a tackle and dragged another defender into the end zone for his second score of the game.

With the chance at getting the running clock looming, the Rebels went for two, but McDaniel was tripped up in the backfield.

They wouldn’t have to wait long to get the clock running, however, as Bartleson took a reverse that completely fooled the Scott defense. With nobody in front of him, and nobody able to catch him from behind, the Notre Dame commit sprinted into the end zone for his 12th rushing TD of the game.

“It’s one of those feelings — I guess not everybody gets to experience it,” Bartleson said about seeing open field in front of him. “But you never really know. I just keep my head on a swivel but keep my eyes on that green pool down there in the end zone.”

And with that, the clock would run for the rest of the game.

The Eagles attempted a fake punt deep in their own territory that was quickly snuffed out by a Boyle special teams unit that had been close to blocking one all game and took over on the five yard line. Lanter connected with Luke Sheperson for his fifth passing TD of the game to go up 48-0, which would be the score at the half. 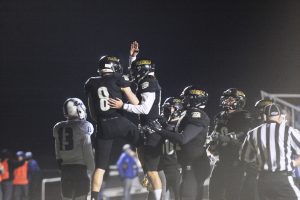 Reese Smith gave the Rebels another scoring chance when he got his second INT of the game, but a holding penalty took away the Sacco TD run, and Boyle elected to let the half end.

The Rebels took the second half kick off and led a drive that encompassed most of the third quarter while the clock ran. After one touchdown was called back due to an illegal motion penalty, Jacob Graves would finish it off to bring us to the final score of 55-0.

While Scott looked like they had a chance to make something happen, but Cash Logan got the fourth pick for the Rebels to secure the shutout.

Going into Friday’s game, the defensive focus would’ve been on stopping Scott running back Quincy Perrin, who would eclipse the 5,000-yard mark for his career with his first carry in the second half. But the starting unit of the Rebels was able to bottle him up and shut down the Eagles’ offense.

“We did a really job attacking and controlling the line of scrimmage,” coach Smith said. “They’re big up front so I was really concerned about that. He is a good running back but we kept fighting and scratching and clawing up there and we were able to get him.”

“Whenever you know someone is coming behind you and everybody is flying to the ball, it’s a lot of fun,” senior linebacker Ezarios Roller added. “We pride ourselves on making everybody one dimensional and we’ve been doing that all year.”

With the win, coach Smith has achieved at least one of his preseason goals — practicing on Thanksgiving. But the team has kept its eyes on the prize all season long.

“We felt like we should’ve won last year. Our senior class has taken it on our shoulders to finish that mission we should’ve finished last year,” Colwick said.

“It’ll get tougher after this. It’s the final four,” Smith added. “We have to wait and see who it is and get ready like we always do.”

With Madisonville-North Hopkins coming back to beat Franklin-Simpson, that means that Boyle will be facing Central (Louisville) — last year’s 3A champions. That game will be at Rebel Stadium.