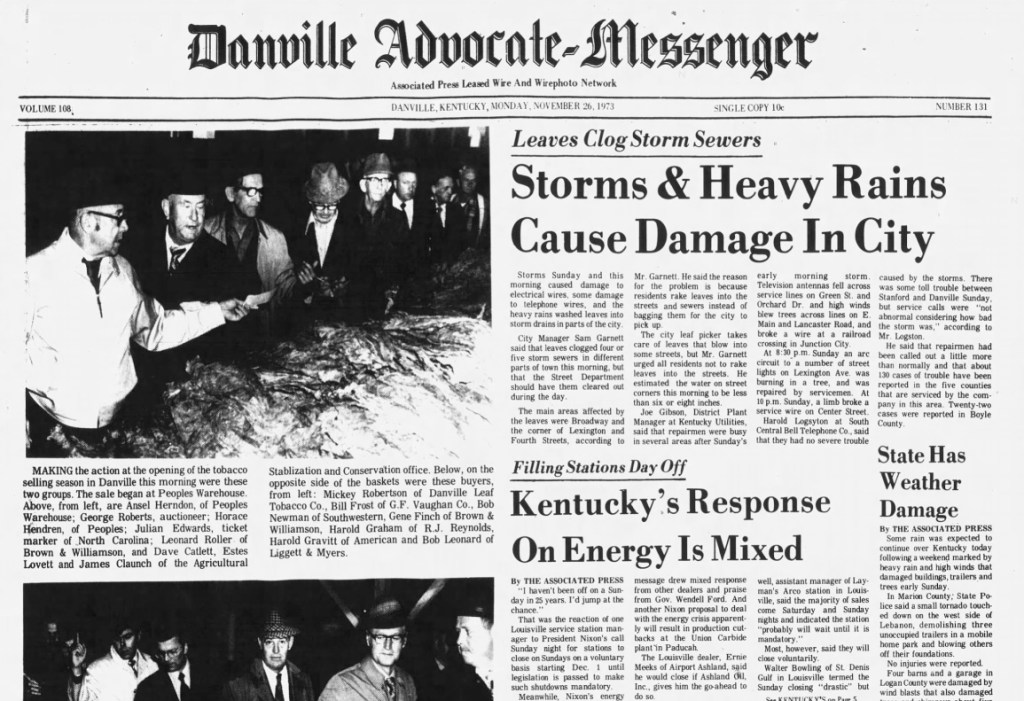 The front page of The Danville Advocate-Messenger on Nov. 26, 1973.

On this day 46 years ago, the nation was in the midst of a fuel crisis. A shortage of gasoline brought on by an Arab fuel embargo led then-President Richard Nixon to call for a wide variety of measures intended to reduce how much gas Americans were using.

Nixon’s proposals included a controversial call for gas stations nationwide to close on Sundays — a presidential request that Congress ultimately declined to make mandatory, according to Politico.

Gas stations in Danville and Boyle County were all but unanimous in complying with Nixon’s request, according to a front-page article in The Danville Advocate-Messenger on Nov. 26, 1973.

“A survey of stations representing each of the major oil companies showed that all but one plan to close Dec. 2,” the article states. “Jerry Daugherty at Daugherty’s Ashland Service Station, Main Street, said he would first have to check with his company since such a cutback in service is not included in his contract.”

One station operator, Dan Montgomery at Montgomery’s Gulf on East Main, said he had already been closed on Sundays for several months because Nixon had made a similar request earlier in the year.

“Distributor A.D. Yeary at Richmond-Yeary Oil Co. said the president’s message last night was ‘expected’ and that something had or ‘has to be’ done to alleviate the situation,” the story reads. “Whether these latest measures are the answer to the gasoline shortage, he was not sure. He also said he felt that most service station operators would be glad to take Sunday off.”

None of the gas station operators interviewed thought closing on Sunday would substantially affect their business.

“I think we’ll pick up enough business during the week to offset the difference,” said Russell McGuffey, who operated the Standard Service Station on West Main Street.

“I feel like we’ll have more customers on Friday and Saturday nights,” said Joe Curtsinger, operator of Curtsinger’s Shell Service Station on Main.

“This won’t cut out Sunday driving,” McGuffey said. “But it will curtail it. These people won’t be able to get that second fill-up they are accustomed to after traveling a distance.”

The article concludes, “On the more pessimistic side, Jerry Daugherty said, ‘Well, you can’t expect to fill up on Saturday and go around the world.'”

Also on the front page on Nov. 26, 1973, was an obituary for Miss Ruth Esther Goggin, 70, who had worked as a school teacher for 43 years. She ended her career at Jennie Rogers Elementary School in Danville.

“She was a Pulaski County native but had lived in Danville 55 years and was a member of the Presbyterian Church,” the obituary stated. “She was a graduate of Danville High School and Eastern Kentucky University, Richmond, and obtained a master’s degree from the University of Kentucky.

“The daughter of the late Bowen and Bela Waddle Goggin, she is survived by three brothers, Walter Goggin, Logan Goggin and Jack Goggin, all of Danville.”