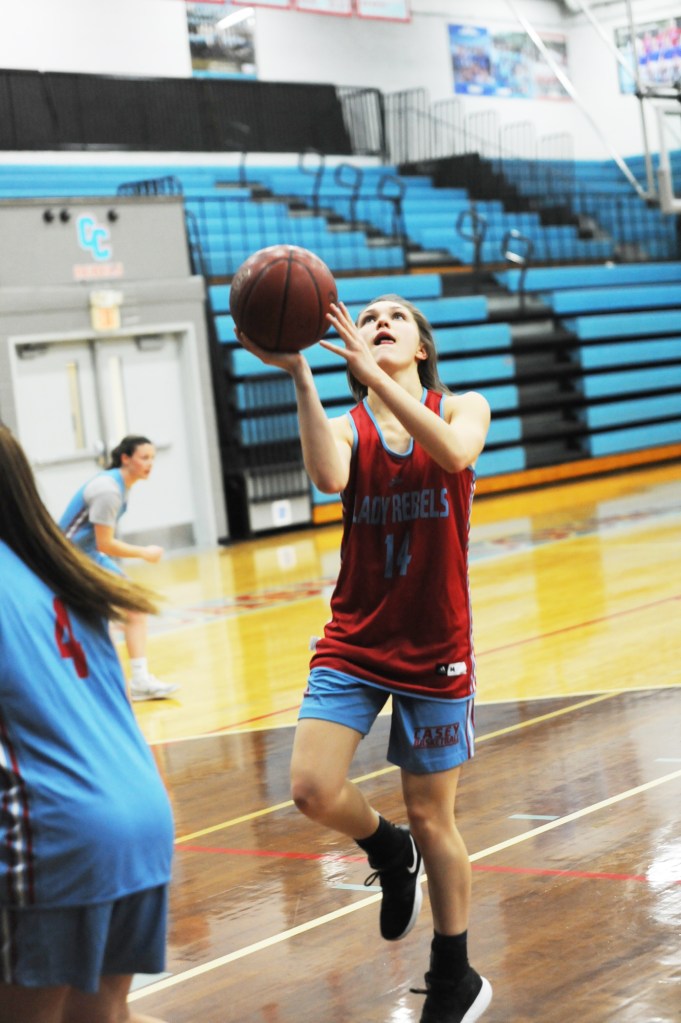 Last year was the second straight year the Casey County girls basketball team lost in the 12th region championship game, and coach Tara Weddle said it was a harder pill to swallow the second time.

Last year’s team was also a team without seniors, something that is overcorrected this year when the Lady Rebels have seven players in their final year in high school.

The 2018-19 team, Weddle believes, felt the pressure of getting back to the region championship game and that it was a tough year playing under that.

That pressure will still be there for the 2019-20 Lady Rebels, but that deep senior class, she believes, will be able to handle it and help the rest of the team handle it.

“(Last year) we didn’t have a senior on the team to step up and be a leader. I think we got it together at the end of the year and I think we played our best ball when it counted,” Weddle said. “I think they do feel that pressure, but they’ve all been there and they know what it takes to get there and to play in that environment.

“We have a really brutal schedule this year. I’m hoping that prepares them for late in the year. I think a lot of the girls have an idea of what they’re going to do next year which takes a lot of the pressure off as well. I’m hoping we’re a lot more relaxed and don’t feel as much pressure.”

Part of that brutal schedule is a game against Maribyrnong College from Australia on the second day of the season after opening the year on the road against Boyle County.

While the goal for every team is to win the region and get to play in Rupp Arena for the state tournament, the two years of coming up short in the regional title game has given Weddle perspective on what it takes to get that far.

“A lot of teams, all they talk about is Rupp — which is obviously a goal for us — but it’s not something we want to hound on,” she said. “If you don’t win that first game in district, the season is done. So that’s the most important game for us is the first round of district. Once that game is over with, we’ll cross those bridges.”

If they can get past the first round of district, they’ll enter a regional tournament that might be one of the toughest in the state.

“On the girls side, the 12th region is brutal. Two years straight they were the state champions and last year was the state runners up. I think that speaks volumes about the region,” Weddle said. “(Defending champion) Southwestern is coming back fully loaded. Danville lost Ivy Turner, but coach Mason does such a good job of getting girls ready to play that I think they’ll be competitive. Mercer County is always athletic and competitive. Rockcastle is always really good, too. There’s a lot of changes in the region, but I think it’s still a lot of strong competition.”

The Lady Rebels enter the year as one of the favorites to get over the hump and bring home the regional title, especially bringing back the entire team from a year ago. Weddle says that she doesn’t let her team focus on those expectations, or that regional rivals will circle their name on the schedule.

“We worry about ourselves. I’ve had these girls since they were eighth graders — most of them — and the thing I always talk about is that nobody is for you except who’s in this locker room.”

Weddle obviously as a lot to be excited about this year with a rotation that starts with seven talented seniors. Point guard Lauren Lee is the team’s “motor” and Weddle hopes she’ll be more relaxed this year after signing with Campbellsville University. Jordy Stephens is “the fastest kid in the 12th region hands down. She can do everything. She can guard, shoot, get to the rim,” Weddle said. Sharpshooter Gina Cravens averages over 40 percent from three and will be the leader of the team. “She’s our calm in the storm — if it’s chaotic we always lean on her even if we don’t realize it.” Mackenzie Cundiff will be first off the bench to give the Lady Rebels a boost of energy when they need to sub.

One thing that Weddle is trying to do is to get younger players more involved, which is tough to do when your team runs seven seniors deep.

Overall, coach Weddle is confident that this team is better than last year’s, which should scare everybody else in the region.

“I’m expecting us to be better than we were last year. Obviously the end goal is a trip to Rupp even if we’re not putting all our eggs in that basket,” she said. “I’d like to be the top seed in district again — we’ve been that the last two years. I think we’ll take some losses down the road but I think they’ll make us better. I don’t expect an undefeated season — although that would be nice. We’ll be a much more relaxed team than we were last year. Last year was really stressful and up and down.”