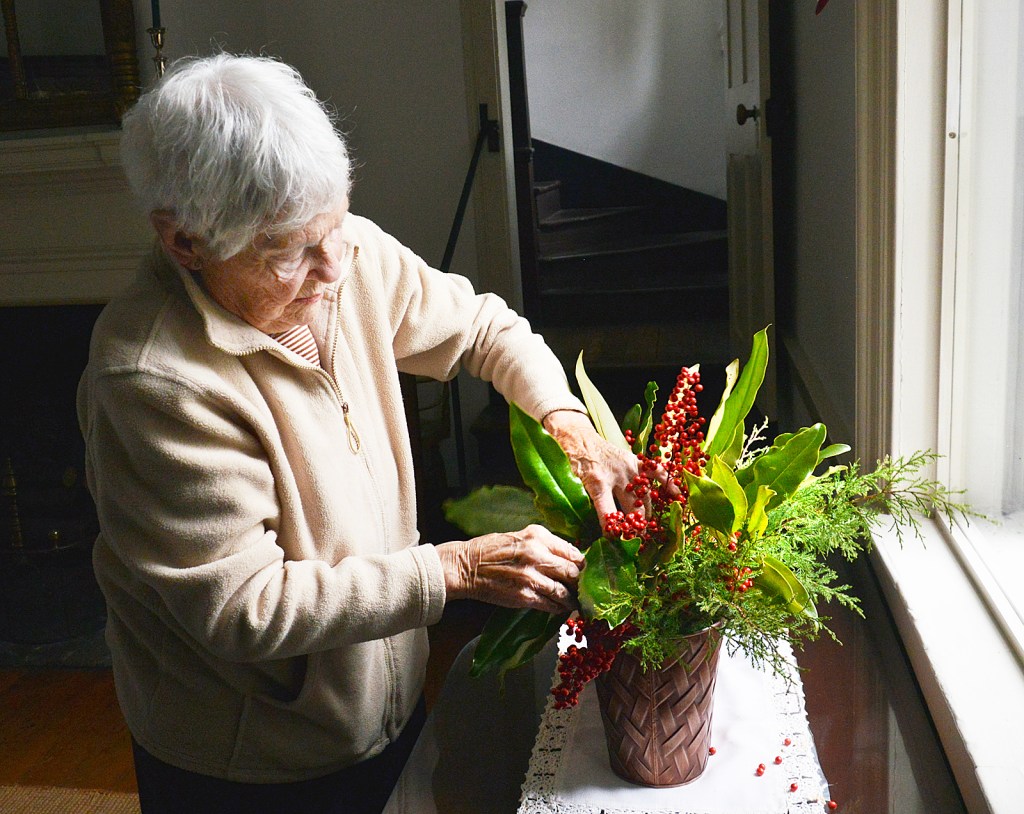 Garden Club of Danville member Kay Arnold, spruces up an arrangement of fresh magnolia leaves and evergreens in preparation of the club's annual Green Tea fund-raising event which will be held on Sunday, Dec. 8 from 2 - 4 p.m. (Photo by Robin Hart) 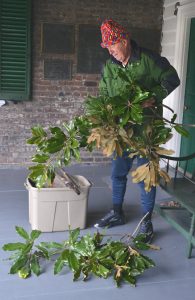 Garden Club of Danville member Charles Meshako, pulls out freshly cut magnolia branches to be used in decorating the museum for the club’s annual Green Tea fund-raising event which will be held on Sunday, Dec. 8 from 2 – 4 p.m. (Photo by Robin Hart)

Santa’s elves can’t be any busier than members of the Garden Club of Danville this week, with preparations in full swing for the annual Open House and Green Tea at the McDowell House Museum on Sunday, Dec. 8, from 2-4 p.m. This year marks the 55th Green Tea the club has celebrated at the historic home of Dr. Ephraim McDowell, across the street from Constitution Square in downtown Danville. There is no charge, but donations will be accepted for the Salvation Army and Family Services of Boyle County.

In over half a century, the Garden Club has raised thousands of dollars for charities, beginning at the very first tea in 1964. Those long-ago members chose the name Green Tea — not for the evergreen decorations, but for the color of dollar bills collected.

When you enter the double front doors of the McDowell House, you will leave the commercialism of today’s hectic holiday season behind. No modern, artificial decorations are permitted. Club members bring holiday greenery from their gardens and spend a busy day making the house look as it might have when Dr. and Mrs. McDowell and their six children celebrated Christmas here. Diane Meshako and Jan Messamore are coordinating the event this year.

Individual gardeners choose a spot in each room of the historic house to decorate with evergreens, fruit and dried materials. Prospective member Kathy Wilson is making a beautiful, Williamsburg inspired arrangement for the dining table. The Green Tea is a fine place to discover creative ideas for your own Christmas decorating. 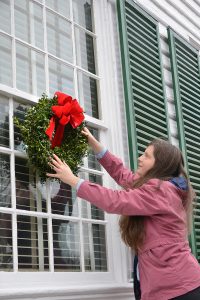 Early in the week, Linda Taylor gathered her helpers to make five boxwood wreaths to hang on four front windows of the house and the door of the adjoining apothecary shop. Club members and friends donated heaps of boxwood clippings, which were gathered into small bunches and attached to straw wreath forms with special U-shaped pins. It’s no simple task. Because they will be hung on the windows and seen from inside and out, the wreaths must be covered with boxwood all the way around. Each wreath gets a big red bow to finish it off.

The Green Tea features a full afternoon tea in a formal setting, with linens, china, silver, and candles, just as the McDowell family might have enjoyed in the early 1800s. The dining room table will be spread with homemade cookies, cakes, candies, and tea sandwiches. Lana Little is overseeing the refreshments. She’ll make sure there is enough to keep the table generously spread all afternoon. Traditionally, past presidents of the club pour the “tea,” which is actually hot spiced cider.

Music will again be provided by the Danville Dulcimers of Ss. Peter and Paul Catholic Church, who have generously donated their time and talents in recent years. Guests have been known to sing along with the dulcimers when Christmas carols are played.

Visitors will be able to tour the home, where the rooms are furnished with early 19th century antiques and paintings. The house was built in stages between 1792 and 1804, with a small office added in 1820. Dr. McDowell lived there with his family until his death in 1830.  If you’ve never toured this Danville landmark, the Green Tea would be a perfect opportunity. If you’ve attended past teas, you know what a treat awaits on Sunday.

No charge, but donations are accepted for the Salvation Army and Family Services of Boyle County.