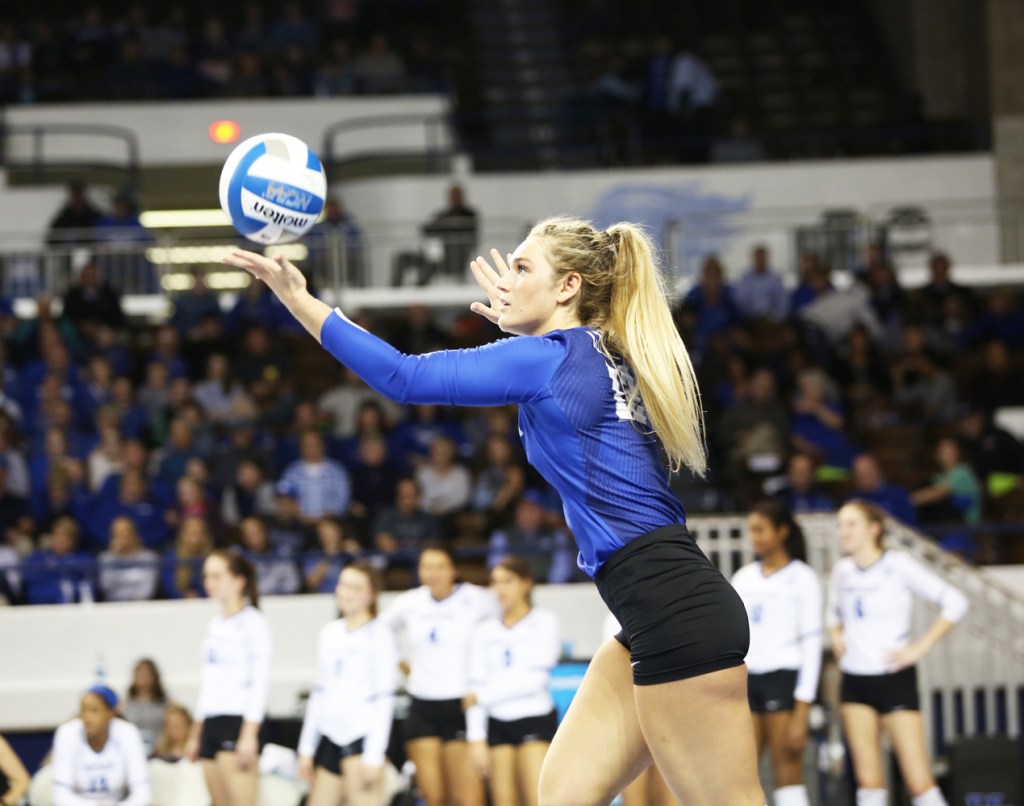 Gabby Curry isn't looking ahead but she believes Kentucky, the No. 9 overall seed, can win a national title. (Larry Vaught Photo)

For a team picked to win its third straight Southeastern Conference volleyball championship and a roster loaded with talent, losing at home was not something Kentucky expected to happen this year.

Yet it did — four times. The Cats dropped consecutive non-conference matches to Indiana and Purdue before losing SEC home matches to Georgia and then Texas A&M.

“Obviously nobody wants to lose and nobody wants to lose at home but I think those losses made us who we are today,” junior Gabby Curry, who Sunday was named the SEC libero of the year for the second straight season, said.  “I know that is cliche but genuinely I think we learned how to fight for each other more than anything else when we lost those matches.”

Curry’s father, Buddy, is a former NFL linebacker (1980-87) and college player at North Carolina. He’s watched UK rebound to win eight straight matches going into NCAA Tournament play Friday when it hosts Southeastern Missouri State and then if it wins would play the Northern Kentucky-Michigan winner on Saturday night.

Gabby Curry enjoyed celebrating with teammates after UK swept Ole Miss last week to claim a share of the SEC title with Florida and got the league’s automatic NCAA bid because of its two wins over Florida.

“I attribute it to the hard work we put in before the season and obviously during the season. I think teams are made in the offseason and preseason,” the UK junior said. “I am excited to see how far we go this postseason. Pretty cool three times (winning SEC) and I have been here three years.”

She said the preseason expectations and pressure never really bothered her.

“Starting about midseason I was thinking more about us and what we could do instead of expectations for other people,” Gabby Curry said. “I think that is an important thing to do. I think we could have done it earlier but I am excited we pulled through and fought as a team to get where we are.”

Buddy Curry, the 1980 NFL Defensive Rookie of the Year, said his daughter came to UK from Georgia because of her respect for coach Craig Skinner and her belief that UK could win a national championship.

“We knew UK was near the top of the SEC, but three (SEC) championships in a row are fabulous. Gabby and her recruiting class have seemed to fit in nicely,” Buddy Curry said.

“Gabby has always been a productive competitor. She owns subpar play and works hard to correct mistakes. We are proud of her, but also of her teammates who come early to practice their craft and battle through each game. We are most proud of her desire to be excellent in every area of life — thus being well rounded in the studies and relationships.”

Gabby Curry is an intense competitor. There’s never a shot she thinks she cannot dig to set up a Kentucky return. She dives, tumbles and rolls on the mat consistently during matches yet never shows any signs of fatigue or pain.

That attitude never shuts down. After the win over Ole Miss when UK was celebrating the SEC title, Curry went into the locker room to get her cell phone to take pictures. She returned to the celebration carrying numerous cell phones.

“I just knew everybody would want to take pictures and there was a lull in the picture taking, so I decided to go in and get mine and saw everybody else’s and just wanted to get them. Everybody’s I saw, I brought out to them,” she laughed and said.

Kentucky would like to keep celebrating more wins. For that to happen, Gabby Curry will have to be one of the catalysts. It’s a role she has grown into not only with her experiences on the court but also her growth off the court.

“She has matured as a team leader and person. Part of the changes come from maturity and the others are from her facing adversity her freshman year as well  in many games each year,” Buddy Curry, who has had two sons play major college football, said. “I also think she has worked through fatigue and difficulties resulting from participating in the Pan Games last summer. She has a no-quit, no-complaining demeanor.”