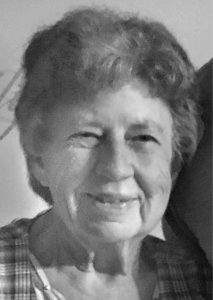 Nell Peek Deatherage, age 88, of Stanford, Kentucky, passed away Wednesday, December 4, 2019 at Ephraim McDowell Regional Medical Center in Danville, Kentucky. She was the wife of the late Hubert Deatherage, Jr., her husband of 65 years, who preceded her in death Sunday, December 3, 2017.

Nell was born on Wednesday, December 31, 1930, on the family farm in the Turnersville section of Lincoln County, Kentucky, to the late James Wilson & Martha Lunsford Peek. She accepted Christ as her Savior at an early age, became a member of Blue Lick Baptist Church until her family moved to Stanford; and she moved her membership to Stanford Baptist Church in 1951.

Nell graduated from McKinney High School in 1949. She was Valedictorian of her class and helped establish the McKinney Alumni Association; and was its first Secretary. Her first job was in the office of the Old Stanford Creamery on Water Street. This job she left to join Junior while he was in service, any time she wanted to work, she went back several times to work at the creamery. Later, she worked as deputy Circuit Clerk. Surviving are her two children, Ronnie Deatherage (Linda) and Debbie Deatherage Wilson (Terry) both of Stanford; four grandchildren, Kevin Deatherage of Lexington, Kentucky, Kelly Grigson (David) of Stanford, Ethan Wilson (Kaitlyn) of Hustonville, Kentucky, and Hagan Wilson (Brianne) of Florence, Kentucky; five great-grandchildren, Lincoln Deatherage and Cicily Deatherage both of Lexington, Annabelle Grigson and Asher Grigson both of Stanford, and Eli Crabtree of Florence; two great-grandchildren due in 2020; one sister, Ruth Ryan of Danville, Kentucky; two sister-in-laws, Emma Peek of Somerset, Kentucky, Susie Peek of Crab Orchard, Kentucky; and several special nieces and nephews. In addition to her husband and parents, Nell was preceded in death by two brothers, Frank Peek and Tommy Peek, and brother-in-law, James Ryan.

Visitations will be held 5-8PM Friday, December 6, 2019 and after 10AM Saturday at the church. Fox & Friend Funeral Home, Stanford, is entrusted with Nell’s arrangements. Guest Book at www.friendfuneralhomes.com.