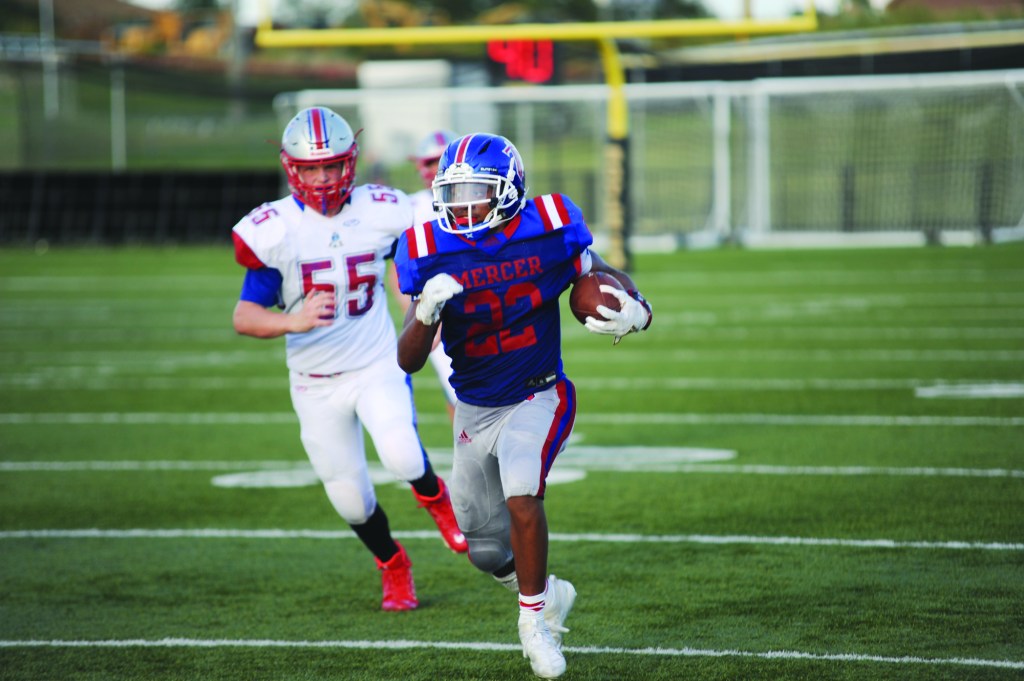 Malachi Yulee was named unanimously to the All-Area team as a running back. (Photo Derek Brightwell)

The 2019 version of the Advocate-Messenger All-Area football team was led by Boyle County — who plays Saturday afternoon in the 4A State Championship. The Rebels had nine players named to 10 positions on the team and had one other player earn honorable mention at his position.

On the offense, Rebel quarterback Reed Lanter earned a nearly unanimous selection. He goes into the state championship game only 33 yards from eclipsing the 3,000 yard mark and boasts a TD-INT ratio of 39 to three. He’s been the catalyst for the states most explosive offense.

In the backfield, Mercer County back Malachi Yulee and Boyle’s Andrew Sacco get the nod. Sacco came into his own after Landen Bartleson — who earned honorable mention — went down midseason with a hamstring issue. Together with Will McDaniel — who also earned an honorable mention — Sacco helped the Rebel running game not miss a beat. When Bartleson returned, the trio formed a diverse backfield with Sacco being the punisher. While he only gained 634 with 10 touchdowns, he made sure every one of those yards were earned.

Yulee was an explosive back who led a balanced Titan rushing attack that featured an honorable mention running back in Brayden Dunn and All-Area linebacker Bryce Yeast and All-Area DB Kaelin Drakeford. Yulee was the unquestioned workhorse of the backfield, however, as evidenced by his 111 carries for 928 yards and 14 touchdowns — all team leads.

The receiving corps is headlined by Offensive Player of the Year Reese Smith. Despite missing games late in the season, Smith still posted impressive stats — 1,353 yards and 19 touchdowns. He also gained 128 yards and three scores on seven rushing attempts and even completed a touchdown pass. 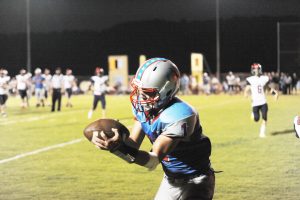 Smith is joined by Casey County’s Micah Pendleton. Pendleton was the top target for the Rebels and finished the year a single yard shy of 900 and snagged eight of the team’s 17 touchdown receptions. Lincoln County’s Clayton Davis rounds out the receivers. Davis was responsible for over half of the Patriots production in the passing game. He caught 48 of the team’s 92 completions, 789 yards and nine of the 14 touchdowns through the air.

On the other side of the line of scrimmage, Lineman of the Year Wilson Kelly highlights the class. Danville’s Seth Gosser, Mercer’s Darrian Baker and Garrard’s Cortez Issan all make the cut.

Defensive Player of the Year Darrian Bell is the leader of the linebackers coming off a year where he eclipsed the 400 career tackle mark, led his team in tackles for the second time in his career and was the unquestioned leader of the Admirals’ defense. He’s joined by crosstown rival Ezarious Roller who led the Rebels with 89 tackles — 55 solo. Mercer County’s Bryce Yeast closes out the group. Yeast was the Titan’s leading tackler with an eye-popping 133 tackles. 82 of those were solo, and seven were for a loss.

Reese Smith shows up again in the defensive backfield as he closes out his Rebel career as the interceptions leader after passing Jacob Tamme earlier in the season. On the year, he picked off seven passes, and ran one back for a 65-yard touchdown. Kaelin Drakeford from Mercer County — who also earned honorable mention as a quarterback — showcased his athleticism as he snagged four interceptions in addition to his offensive duties where he was the QB and third on the team in rushing. Reece Brown from Casey County was another dual threat QB who earned his place on the team as a defensive back. Brown was the Rebels’ leading rusher and passer and had an interception and 52 tackles. Rounding out the group is a tie between Boyle’s Landen Bartleson and Will McDaniel. While Bartleson had one more interception than McDaniel’s pair, the latter took one of his to the house for a TD. McDaniel was also fifth on the team in tackles, and picked up a sack along the way. For Bartleson, his athleticism may have inhibited his interception opportunities as his receiver was often not open.

Last but not least, the special teams. Jackson Smith all but cemented his spot on the team when he made all but one of his 87 point after attempts. The one that he missed was blocked, snapping a streak that was on the verge of historic. The nation’s top kicker in the 2022 class also hit all eight of his field goal attempts. He split votes with the All-Area punter Noah Davis from Mercer County.

Reese Smith does it all, wins Offensive Player of…