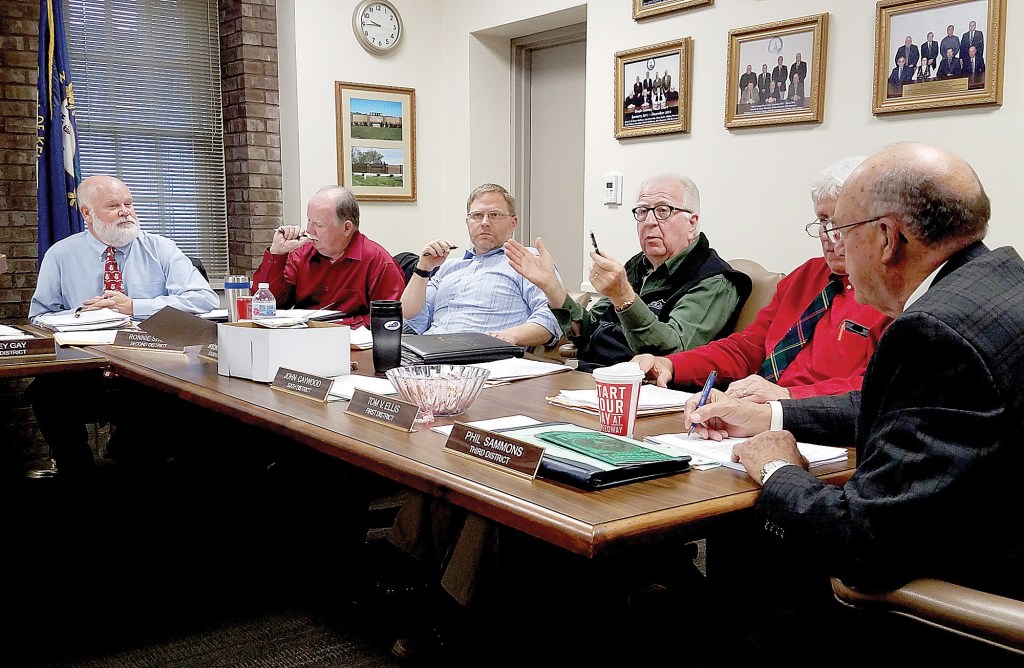 Boyle County magistrates meet Monday morning, during a meeting in which they passed a second reading of an increase to the county's payroll and net profits taxes. From left are magistrates Jamey Gay, Ronnie Short, Jason Cullen, John Caywood, Tom Ellis and Phil Sammons. Cullen was the only one to vote against the increases. (Photo by Ben Kleppinger)

Those who voted for the increases were adamant before the vote that no one wanted to raise the taxes. But the combination of upcoming big-ticket expenses and a Dec. 31 end to the county’s ability to ever raise the tax rates again put them between a rock and a hard place, they said.

The one magistrate opposed, Jason Cullen, said officials should have looked harder at cutting expenses instead, and he challenged his fellow magistrates to reduce the tax increases in the future if cuts can be made.

Magistrate Jamey Gay made the motion to pass a second reading of the increases, based on the work and recommendation of the Finance Committee, which he sits on with Cullen.

“One of the things that has been brought up and one of the things that the committee looked at very seriously and took great consideration of is the impact that this could have on future growth and economic development,” Gay said. “… It really comes down to the fact that we’ve got to really think about what’s in the best long-term interest of the county’s financial situation, and this is no way has been an easy process or an easy decision. It’s something I’ve had many sleepless nights over.”

The Finance Committee based its recommendation to increase tax rates in part on a “white paper” that summarizes the county’s current financial situation. Among the points on the white paper:

“This is breaking my heart to have to vote like we’re going to vote in a minute,” Sammons said. “But when … the Census comes out, this is the last time that we’ll ever be able to do this.”

Sammons said he had been fielding a lot of calls about the tax increase in the run-up to Monday’s vote.

“Danville raised taxes … twice in the last year and a half or two years,” Sammons alleged. “I don’t remember anybody crying and carrying on about it then. These people didn’t call me then. And this is the first time we’ve done this … in approximately 15 years.”

Sammons said things like sales tax and gas tax are not within the fiscal court’s control, so the county has very limited options.

“I probably hate it worse than anybody, because I’ve made the comment like all of you have — ‘I won’t vote for a tax increase.’ But I don’t see how we can keep doing it if we’re going to stay open.”

Magistrate John Caywood, a long-time member of the fiscal court, said the magistrates were elected “to make responsible decisions.”

“You all are making a very important, critical vote today. And it is not easy, it is not fun, it is not one you want to do,” he said. “… For many of you, this is the first time you have made this type of vote. I think you all will step up to the plate and do the responsible thing.”

Magistrate Ronnie Short said for him, voting for the tax increase came down to “a seven-letter word we have to remember — service.”

The tax increase will enable the county to continue providing service to its residents, including those services provided by the EMS, sheriff’s office and road department, Short said.

“Service costs. Anybody ever given you any service that doesn’t cost you? It does cost,” he said. “The service we provide to this county — we can either go forward with it or we can say, ‘No, we’re not going to do anything.’ When the money runs, out, guess what happens to your services?”

Magistrate Tom Ellis echoed the concerns of others about rising pension costs and the need to do something about the county’s aging jail. And he restated the end-of-year deadline when the Census and state law combine to prevent any future increases.

“I, too, am one of those people who is very ultra-conservative, looking at additional taxation,” he said. “But this is an imperative, well illustrated by Magistrate Caywood and Magistrate Sammons that if we do not do this before midnight, Dec. 31, that opportunity … is lost.”

Cullen said he appreciated the comments about service from Magistrate Short, “but we have a service to the taxpayers as well — to be responsible with the funds that are allocated right now.”

Cullen said all members of fiscal court should be working with Treasurer Mary Conley to identify areas where the county is spending too much and work to cut spending in the next budget cycle.

“That’s really what this comes down to is waste,” he said. “… When we start talking about budgets, are we going to remember this feeling in our stomachs about having to raise this tax?”

Cullen said if the fiscal court gets serious about cutting spending in the county’s seven departments, it could reduce expenses enough that it could no longer need the tax increases.

“Are we willing to scale back this tax increase?” he asked. “Because that’s always an option and we really need to look at that as we go through … Let’s find ways to make this better and stop spending.”

“I think we do scrutinize our budget and work to keep our budget as lean and as efficient as we possibly can under (Judge-Executive Howard Hunt’s) guidance and (Conley’s) guidance,” he said.

Hunt said he would accept Cullen’s “challenge that we need to be more vigilant over the expenditures. But I do not agree with the premise that our budgets are elaborate in any way, shape or form, or exuberant.”

“I don’t think I said that,” Cullen responded.

Cullen said later he thinks the fiscal court should be telling department heads directly to “tighten your belts” and certainly not to expect any increase in funding following the tax increase.

“This is not going to be a pay raise for anybody,” he said.

After the 5-1 vote, Hunt said he wouldn’t vote but that “I side with the majority.”

Caywood asked for an explanation of Cullen’s vote against the increases.

“He knows what we’re dealing with because of the white paper he helped prepare,” Caywood said. “I would like to know what his alternative plans are.”

“I think I was pretty specific about why I voted no, and I think that going over budgets will take a lot of it,” Cullen said.

Then, Cullen said he would like to see Boyle County EMS become its own special taxing district, rather than a department funded through the fiscal court.

“There’s alternatives, there’s options,” he said. “We’re a town of 30,000 people and our budget has opportunities to scale back.”

Cullen also suggested the county could save money by offering less generous benefits to its employees.

Ellis said he respects Cullen for allowing the recommended increase to pass out of the Finance Committee so the full fiscal court could consider it, even though Cullen opposed it.

“An EMS taxing district is only shifting who you write the check to,” Caywood said. “The taxpayer is still paying the tax. And I say that respectfully.”

Later in the meeting, Hunt announced that the Kentucky Retirement Systems board had indeed voted to increase the mandatory retirement payments for system members like Boyle County by 12% for the coming year — one of the expected increases officials say the tax increases will help cover.