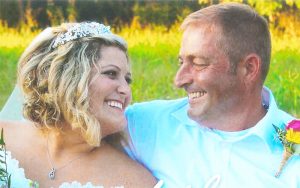 Rebekah C.G. King and Adam Paul Godlaski were united in marriage on Sept. 21, 2019 at the Graves family farm in Winchester, Kentucky.

C.G. was given away by her mother, Rebekah King of Danville, and father, David King of Indiana.

The groom’s parents are Janice and Ted Godlaski, of Winchester.

The outdoor ceremony and festivities were enjoyed by all. The couple spent their honeymoon in Destin, Florida.