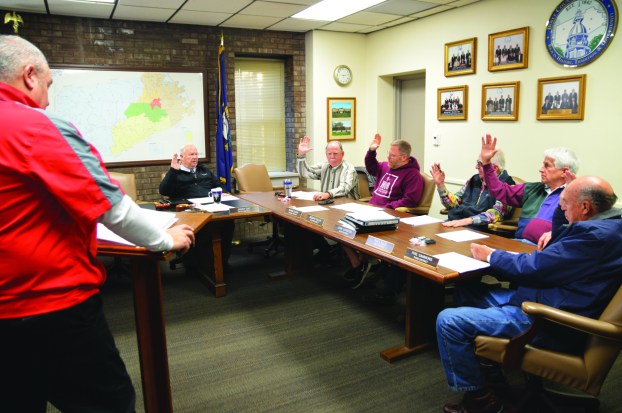 A unanimous vote (except for Magistrate Jamey Gay, away on business) was taken Friday morning, ushering in a new era for the Danville-Boyle County Parks and Recreation agency, as Parks Director John Bell witnesses. It will now be a city-run agency, jointly funded by the city and county. (Photo by Bobbie Curd)

It’s official. After almost a year’s worth of back and forth over funding for and management of parks and recreation, Danville and Boyle County’s governments have accepted a final agreement to get the ball rolling on a new arrangement.

Friday morning, the Boyle County Fiscal Court unanimously voted to enact the new agreement, which will place the responsibility for parks and recreation services on a city-run parks department, with funding of $322,000 contributed by Boyle County. Danville City Commission did the same earlier this week. 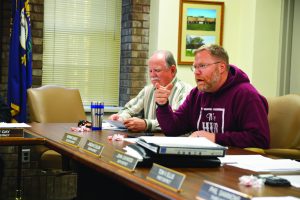 Magistrate Jason Cullen takes the lead for the Boyle County Fiscal Court on discussing the recommended changes to the joint parks agreement that were accepted by the Danville City Commission. “I like the spirit of this,” he said. (Photo by Bobbie Curd)

“The city went ahead and accepted all of our changes,” Magistrate Jason Cullen explained to the rest of the court, minus Magistrate Jamey Gay, who was out of town on business. Gay and Cullen had been concerned with section 10 of the agreement — which deals with staffing — but were able to work it out, Cullen said, with Parks Director John Bell and City Attorney Stephen Dexter, in a final-hour tweaking of the verbiage.

Members of the fiscal court had wanted to be able to vote on any recommended hire for the parks director position in the future.

“While we will not have, like, ‘approval,’” Cullen said, “… because none of the commissioners technically have approval, we will give the judge-executive an idea of kind of what we’re looking for.”

Cullen said, “If I got this right, a candidate will not be brought before us, but we will kind of see a synopsis of who is being considered.” 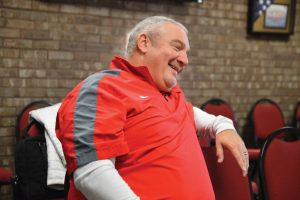 Parks Director John Bell shares a moment of laughter with the Boyle County Fiscal Court, relieved that the joint parks agreement is finally passed and he can move foward. (Photo by Bobbie Curd)

“Oh, absolutely,” Bell said. “In addition to that, going one step prior in the process, the court would have the chance to vet the applicants, make a recommendation via the judge-executive or the designee, as to who you wish to come in for an interview (held with the city).”

Bell reiterated Judge-Executive Howard Hunt, or his designee, will be a voting member of the parks committee, as well. “He is a full voting member. Also it’s a chance then to recap the individuals that were interviewed. This would be done behind closed doors, wouldn’t have to be in public because it is a personnel matter. Then make your recommendations based on those comments … back to the judge for your recommendation to approve a hire.”

“No downside to that, is there? Magistrate John Caywood asked.

Bell said, “In my opinion, no. You’re still getting to vet the entire process.”

Caywood jokingly asked Bell, “When do we get to vet you?” which garnered laughter.

“I assume in June,” Bell said, referencing the fact the new agreement is set to take effect on July 1 with the beginning of the next fiscal year.

“I’ve not accepted or been offered — well, can’t say I haven’t been asked, but I haven’t accepted anything,” Bell said.

Magistrate Tom Ellis said he would make the motion to accept the agreement, “as long as we’re going to have a discussion.” Cullen seconded it.

“After an amazing 11 months, this escaped me,” Ellis began. “… We do not know a process for the selection of the citizen chair for your organization. And I think we need be aware that we should have an influence on that. It’s critical. We have a very outstanding chair right now, and I believe John is very comfortable with him.”

Bryce Perry is the current chair of the parks committee.

Bell said the selection of the chair of the parks committee “is the same as any other committee, it’s decided upon amongst the members of the committee, they vote on that.”

Ellis then said he felt it necessary to make a motion “that we, as fiscal court, pass forward a consensus that a formal vote with many of us around this table, sitting on several occasions with Mr. Bell, we have an extraordinary person who will, in the future, be considered among any other candidates, since we’re going into a new phase of the director of parks and recreation.”

Bell offered that the next two steps in the process will include “some form of transition document as to the next six months, that’s next on my plate. After that, as noted in the agreement, sometime within the first six months, there will be bylaws for the committee developed and passed. Which I’ll be drafting, following almost identical the terms of the current parks and rec board.”

He said as far as the bylaws and responsibilities of the committee goes, “that’s about a three- to four-page document in our current agreement. I will roll that over and develop it. (It) will be very similar. But the chairman of the parks and rec committee will be decided upon by the members of the committee.”

“The only other point is the peculiarity of the last sentence in section 10, which is new language,” Ellis said. That sentence reads, “Prior to the city acting on the recommendation for hire, said recommendation shall be forwarded to the fiscal court, which shall have 10 days therefrom to provide a letter of support.”

Ellis said although he didn’t anticipate a problem, “certainly since I’m giving full endorsement of the city moving forward with Mr. Bell, but should we lose him in the next 30 years, and I don’t want that to happen …”

“We are bound by the peculiarity of that last sentence ‘within 10 days’ … bound within those next 10 days to send support, which I read as endorsement, and we could possibly not feel that comfortable with that person.”

“In which case you don’t send a letter, period,” Judge-Executive Hunt said.

“Thank you. Yeah, right. I don’t anticipate that …” Ellis responded.

Cullen explained that sentence was added because Bell previously made a valid point. “When he was interviewing for the position, he didn’t want to wait around between a city commission meeting and a fiscal court meeting; that could be two, three weeks. The determination was, let’s go ahead and kind of put a timeframe in there that we can call a special meeting to meet and discuss the candidates.”

Ellis said he could see the word “position” used as opposed to “support” in reference to the court’s response on any candidate, but he wasn’t going to request any changes as so not to “slow the process down.”

Cullen said while the agreement “is not free,” referring to the county paying a contribution to support the agency, “the city’s actually giving us a great amount of opportunity to be involved in the hiring process, which they typically wouldn’t do with a city-held position. I like the spirit of this.”

The court took a vote by a show of hands, which was unanimous.

Ellis then brought his motion back to the table to offer a formal support for Bell as the director. Magistrate Phil Sammons seconded the motion, which was also passed unanimously.

Bell reminded the court that sometime before Jan. 31, it would need to rescind the current participation ordinance.

After the meeting, Bell said he appreciates the show of support by the court, but added that he is not aware of any changes in his position planned by the city.

City Manager Ron Scott confirmed this later Friday. He said the city has said “multiple times, all (parks) employees, if they wish, could transition in” to the new city-run department. He didn’t foresee anything changing with Bell’s position.

“After the first hiring effort (by the county for the open parks director position) didn’t go forward in 2019, they asked the city to develop the description, which is what produced John Bell,” Scott said. “That’s not an issue. It’s beyond what was contemplated in the agreement.”

Scott said since the city is still completing its wage and salary study, “all salaries will have to fit in within the pay plan, but I don’t anticipate any problem.”

“We have job applications filled out by everyone, there’s a background search process, which is standard recruitment process. If they’ve already been conducted, those additional checks wouldn’t need to be done,” Scott said.

About three to four years ago, Ben Guerrant says he was contacted by a local women’s club. “They wanted to... read more