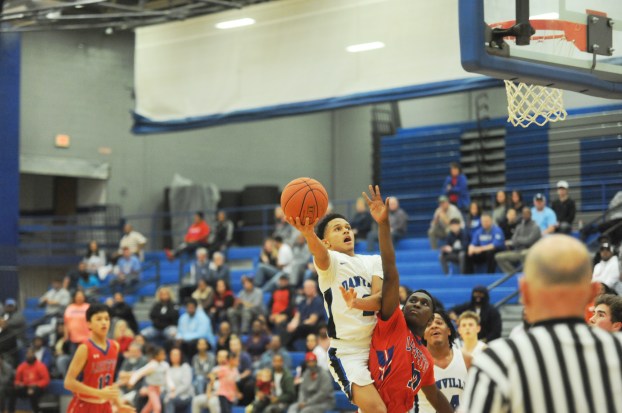 After collecting a Damion Givens-Ford save, Trey Dawson spun through the Lafayette defense and completed this layup for an and-one that made the whole Admiral team go nuts. (Photo Derek Brightwell)

Make it seven in a row for Danville.

After dropping a tough road game to West Jessamine early in December, the Ads have gone on a tear, winning seven straight and all but one by double digits.

To open the RW Baird Holiday Hoop Classic, the Admirals topped Lafayette 70-57 on the only game of the night.

In that win, Darrian Bell recorded yet another double-double with 20 points and 10 rebounds. In Friday night’s 64-38 win over Middlesboro, Bell once again led the team in scoring with 15 and hauled in five rebounds.

“Right now he’s just totally dominant. He eats space,” head coach Ed McKinney said about Bell. “The best thing about him — he’s an underrated athlete, but when he gets his hands on it, the party is over. When gets any part of his hand on it, he gets it. That’s what I love — a physically dominating kid in there sometimes.

“Darrian’s having a great year all the way around. He’s a big strong kid and shoots the ball better than people think he does. He does a lot of things for us.” 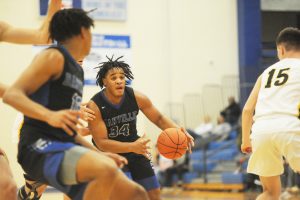 McKinney said that having a guy like Bell has been crucial this year for his team that sometimes struggles on the glass.

The other key player for Danville in this seven game winning streak has been Bell’s cousin, Trey Dawson.

The senior has done it all for the Admirals — scoring, passing, playmaking, rebounding and getting blocked shots.

Perhaps no play better showcased what Dawson brings to the court for Danville than a fourth quarter play against Lafayette.

Damien Givens-Ford corralled a loose ball before it went out of bounds and heaved it into the backcourt where Dawson hauled it in. He then split the Generals’ defense with a slick spin move, and got the lay-up and the foul.

The entire team went nuts, including Bell who sprinted from the paint to the halfcourt line and back again in celebration.

“That was a big play. It was chaotic — I’m not sure we did anything good basketball wise, he just made a play. Which is what you got to have,” McKinney said. “We’ve got to be better collectively but we’re making good plays on both ends. We just have to be a little more collective and get stops as a team. Trey made a couple defensive plays that got us going too. That fourth quarter — he had the tip in off the free throw and that spin move. It just shows his athleticism.”

That “collective” that McKinney wanted to see after Thursday’s win showed itself during Friday’s game.

The Admirals started off red hot. Dawson had 10 points in the first quarter to Middlesboro’s eight. But the Yellowjackets fought back and actually led 26-25 going into the half.

Coming out of the locker room, it was all Admirals as they outscored their opponent 38-12 in the last two quarters for the win.

Danville also had to overcome some struggles in the win over Lafayatte.

“We’d been off three days so I thought we were a little disjointed at times. You have to drill stuff, especially with a younger team out there sometimes,” McKinney said Thursday. “We’re starting to get a little more consistent play out of people. We handled frustration tonight better than usual. We turned the ball over a ton, it seemed like. We stayed in the fight, we didn’t hang our heads when we turned it over. A lot of good stuff, but without practice — a win’s a win.”

On Friday, Danville continued to show that fight and battled through frustration.

“Earlier in the year I didn’t know if we could win a low scoring game because sometimes we weren’t handling frustration well on the offensive end,” McKinney said. “But I’m seeing more when we mess up offensively, it’s not affecting us defensively. We’re a little more collective ‘we want to win’ instead of what’s going on in my world.”

One player who almost quietly had great games in the last two is junior guard Dante Hayden who scored 13 on Friday and 11 on Thursday.

“Dante, sometimes I think we take him for granted,” McKinney said. “He gets 14 or 15 and you think what happened to Dante, but you look down and he still had a pretty good game. The ball spreads around here because we’re pretty good in a lot of spots.”

Aiden Slone is another player who’s been impressing. Fans leaving Thursday’s game commented on the sophomore’s ball handling, court awareness and ability to never stop dribbling and looking for the open man. “Pure point guard” was a phrase used by some, and still Slone scored 17 points against Lafayette. His point guard skills were more on display Friday as he had seven assists and six points and ran the Admiral offense.

In the last two games, McKinney has more praise than complaints from his team’s effort.

“Defensively, our effort was as good as it’s been all year. We were really after it in both halfs. Damien Givens-Ford and Trey really went after rebounds and Darrian always does. Nick played some really good minutes,” he said. “We’re getting good bench play from Ethan Cooper and Jalen (Dunn). We’re on a little run right now. Seven in a row. We’re playing better, harder. That effort is as good as we’ve probably had all year and I was really pleased with it.”

On Saturday, Danville plays the first game of the day at 11:30 a.m. against Augusta and closes the night off with a 7:30 p.m. tip against Madison Southern.

“It’s kind of a different thing, but with the way kids play AAU now, it’s not going to be a killer,” McKinney said about the double header. “Just getting two games in a day where teams don’t have to travel or stay an extra night. It is good for conditioning and it is fun. It’s high school basketball and the kids love it. They’d play three games in a day if they could. It sometimes gets you in bad habits because you try to reserve energy and don’t sprint back on defense like you should. But it’s for the kids and it’s fun.”

But mostly, McKinney says, this holiday tournament is for the kids and the community.

“You’re allowed to play thirty games and if you’re going to get those games in — you almost have to play in some holiday events to get a high volume in a short amount of time,” McKinney said about the four games in three days schedule. “Once we get into the district schedule, you don’t want to kill yourselves. It’s fun for the kids. I tell them — ‘these games are for y’all.’

“Baird really does help us out by sponsoring it. It’s big that they do that. It’s a good tournament, I don’t think there are any good tournaments going around locally. It’s good to have something going on where people can come out and watch some high school basketball.”