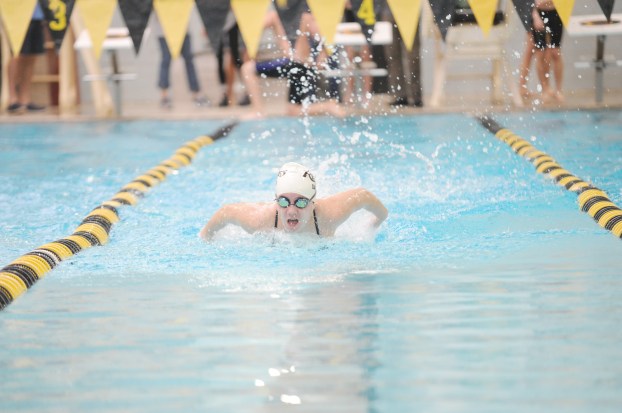 Boyle County was dominant in Saturday’s swim and dive meet at Centre College.

Of the 24 events, the Rebels won 16 of them, and finished in the top three in all but three events.

Danville got a strong performance from its girls team — finishing third — but did not have enough boys to compete in the combined totals.

But it was all Boyle County on Saturday.

Boyle would win the boys version of the same race by an even bigger margin. Creed Farthing, Corbine Coyle, Campbell Coyle and Trey Barnett’s time of 1:46.11 was over 13 seconds faster than second place Western Hills.

Gilbert won the 50-yard freestyle for the Rebels and Nancy Haddad came in third. Danville’s Strysick gave the Lady Ads a fourth place finish. Lincoln County would take the boys race as Woods Smith outpaced everyone else.

In the diving portion, only Boyle competed in the boys event and had all but one competitor in the girls. Will McDaniel finished in first for the boys with a score of 141 and Sophie Arnold finished first for the girls with a 163.75 score.

Lincoln’s Sydney Brown, Boyle’s Spencer and McCormack were the first three finishers in the girls 100-yard butterfly. Campbell Coyle and Creed Farthing finished first and second for Boyle in the boys.

In the 200-yard freestyle relay, Boyle’s girls finished with the best time. The team of Sophia Fogle, Bean,Gover and Nancy Haddad outpaced Danville’s team of Strysick, Julia Hunt, Tubb and Heath. The Rebels finished in second in the boys turn as the team of Barnett, Cole Craig, Oliver Newberry and Michael Farthing couldn’t beat out Western Hills’ team.

Cerqueira earned another top time in the 100-yard backstroke and was followed by teammate Isabella Spencer. Strysick earned a third place finish for Danville. Barnett and Ayden Bianchi tied for second place for Boyle in the boys race, both finishing with a time of 1:20.12.

Boyle teammates Gover and Fogle finished within a minute of each other to take first and second in the 100-yard breastroke. Lincoln’s Dalton Patterson won the race for the boys and Leif Pellant for Danville earned 12 points by finishing third.

In the final races of the day, Boyle swept the 400-yard freestyle relay. The team of Fogle, Gilbert, Spencer and Cerqueira was almost 50 seconds faster than Lincoln’s second place team in the girls and Boyle’s team of Oliver Newberry, Corbin Coyle, Creed Farthing and Campbell Coyle was over a minute better than Western Hills who finished third behind another Boyle team of Matthew Sutton, Michael Farthing, Benjamin Gilbert and Max Germann.

In addition to Boyle, Danville and Lincoln County, DCA’s girls team scored 24 points and Garrard’s boys team scored 16. Those two schools did not field the other team and those were their combined scores.

The theme of this year for Danville’s girls basketball team, coach Judie Mason said at the beginning of the year,... read more