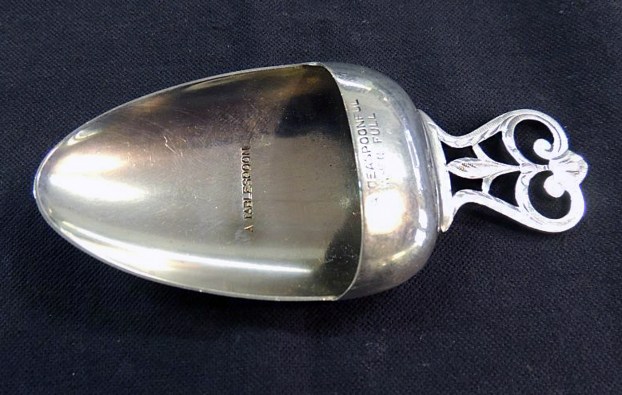 Personal Effects: Consignment store find turns out to be a good buy

Question: Hey J, look what I found at a consignment store when I went to see my sister over the holidays. It was in a booth marked $20 but it was all half off! So I got it for $10. I saw that it was marked sterling and thought it might be something. But exactly what is it? There are tablespoon and teaspoon marks on it. It is about 4 inches in size. Any help you can give me is much appreciated. Thanks.

Answer: You were very fortunate. You bought yourself a measuring spoon. The top of the spoon says, “A teaspoon when level”, and on the interior of the bowl, it says, “A tablespoon.”

Some would call this a tea caddy spoon, used to dole out the ever precious loose tea leaves. I however, think that it’s a spoon that would have been in the possession of a housekeeper or the lady of the house. It could have been used to dispense extracts, sugar, tea leaves or, most likely, medicine.

This measuring spoon was made by the R. Blackinton Co. in North Attleboro, Massachusetts. They operated from 1862 to 1967. In the world of smaller silversmiths, this was a long career.

I could imagine that your spoon dates to the early 1900s or so. Blackinton mainly made novelty pieces, like this spoon, souvenir spoons, some flatware and small silver holloware. They were absorbed by the Raimond Silver MFG Co. in 1968.

recently sold. You spoon in an upper retail location would likely be priced for about $50. You did well in your purchase. Thanks for a great question.

Even though Junction City awarded the bid to a Lexington construction company to build its new municipal building last month,... read more