Barbara Johnson Sapp, 82 of Lexington passed away Tuesday, December 17, 2019 with her o 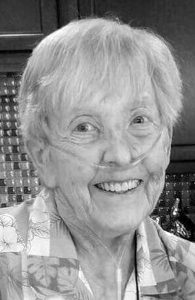 nly daughter by her side. She was born August 1, 1937 in Paducah, KY and graduated from Ballard County High School. She then earned a Bachelor of Science in Home Economics from the University of Kentucky and a Master of Arts in Education from Eastern Kentucky University. She was also an initiated alumni member of the Tau Omega Chapter of Alpha Omicron Pi Fraternity.

She served on the Boards of Directors of the Cerebral Palsy School in Louisville, Ky. and Kentucky Educational Television (KET).

She taught Home Economics at Eastern High School in Louisville, Ky. where she was the Varsity Cheerleading sponsor, Senior Class sponsor and had the Annual Yearbook dedicated to her in 1977. She also taught at Danville High School and Boyle County Middle School from which she retired in 1998.

Barb was known for her generous, giving spirit. She loved to sew and cook and help anyone in any way she could.

She was preceded in death by her parents Joanna & Bailey Johnson, twin brother Larry, and husband of 55 years, Gordon Kenneth. She is survived by daughter Kenna Sapp of Lexington, Ky., a brother-in-law, three sisters-in-law, three nieces and five nephews.

A gathering and time of remembrance will be held on Saturday, January 25 at Ratterman Funeral Home, 12900 Shelbyville Road, East Louisville in Middletown, KY beginning at 10:30am. In lieu of flowers, donations in Barb’s memory may be made to the Cerebral Palsy School of Louisville, 1520 Baxter Avenue, Louisville, KY 40205 or Kosair Charities, kosair.org