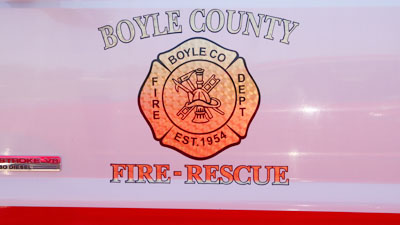 Thanks to some hard working firefighters, a 13-year-old girl reported missing Monday morning was located. She was reported missing by her family, and found in the Upper Salt River Road area, off Lebanon Road/Ky. 34, about a mile away from her home.

Boyle County Emergency Management Director Mike Wilder said the teen apparently left her home around 9:30 a.m., and was outside in the frigid teen temperature for about four hours; she was located at 1:40 p.m.

“She was gone a good while. We had to deal with it pretty quickly today because the temperature was about 15 degrees,” Wilder said.

He said there was tremendous response from local units — including the Boyle County Sheriff’s Office and Boyle County Fire Department.

“The fire department located her,” he said. “They had their four-wheelers combing the area.”

“I was with her; she was coherent. She said she was awfully cold, of course, and she seemed to be fine, but she wasn’t dressed warmly at all.”

Wilder said if they hadn’t found her in the next couple of hours, they were afraid she would get hypothermia, but he felt like she was doing well based on his conversation with her.

A drone was on its way to the area, Wilder said, from one of the Lincoln County fire departments, but she was located before it was needed.

“It was just a tremendous response from the county fire department,” Wilder said. “Those guys are just unreal. They never cease to amaze me. It was a great outcome.”

Danville police were involved in two pursuits less than six hours apart over the weekend. Both suspects who allegedly fled... read more