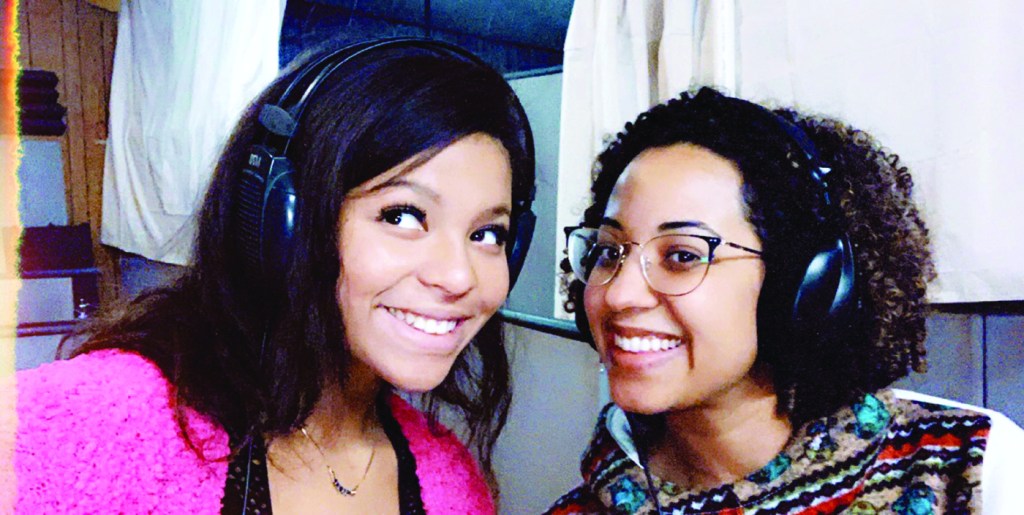 Alyssa Wray, left, and Brittany Voll pose together as they participate in a cast recording of the music from "The Piano Paradox" in a Berea sound studio. The CDs will be offered to the public for a contribution to the Arts Commission of Danville/Boyle County. (Photo submitted)

For the third year in a row, the Arts Commission of Danville/Boyle County has joined forces with a local playwright and others to present a play in the hopes of giving young audiences new ways to think about things, as opposed to turning to drugs. 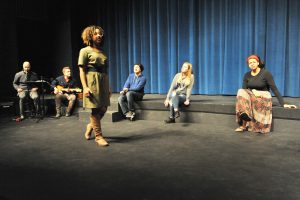 This year, “The Piano Paradox,” written by Liz Orndorff, focuses on how youth are forced more and more to compare themselves to others due to the impact of social media. Orndorff, Arts Commission Director Mimi Becker and Kathy Miles, coordinator of Boyle County Agency for Substance Abuse Policy (ASAP), put their heads together with Jane Dewey, director of arts education for Danville Schools, to come up with a way to present drug prevention ideas to kids in a way that’s not preachy, and is more designed to make them think.

The performance will be shown to Danville and Boyle County students on Thursday and Friday. There will also be a public performance on Thursday night, which will be free to attend.

Orndorff said Becker asked that it be a rap-style musical this year. 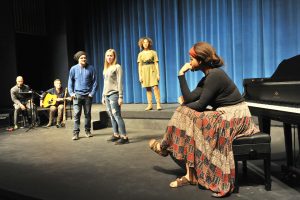 “Last year, we added songs to the show and it went over so well, we decided to go all the way this year,” Orndorff said.

“The Piano Paradox” is a combination of rap, beatboxing, ballads and spoken word.

“I am so excited about this show,” Orndorff said.

Musician Travis Kern, who is a counselor at Burgin Independent School, wrote the music “and it is terrific,” she said. “He recruited Brett Higgins of Richmond to provide the beats.”

The four actors are Brittany Voll, a teacher at Kentucky School for the Deaf, who got rave reviews for her performance in West T. Hill’s “Young Frankenstein;” Alyssa Wray, a senior at Boyle County High School who’s heavily involved in the drama program; Hannah Dunn, a Bluegrass Community & Technical College student who starred in “Mamma Mia” last year at Ragged Edge Community Theatre in Harrodsburg; and Elijah Brown, a Danville actor and singer who has been in the previous two Arts Commission plays, as well as many other local theater performances. 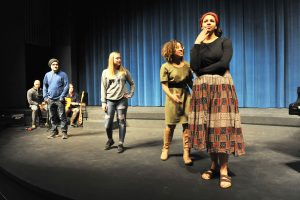 The crew recently got together to record an “original cast recording” of the entire show, Orndorff said. That recording has been turned into a 45-minute CD, which will be offered to anyone who would like to make a donation to the Arts Commission.

The past two shows also approached serious topics, such as decision-making (“The Tipping Point”) and being passionate about something (“The Convergence of Desire”). Orndorff said the message — “don’t do drugs” — is designed to be communicated between the lines “without coming out and saying those words specifically. The productions are designed to make students think, and to offer alternatives to falling into the drug trap.”

Dewey said schools must address many obstacles to student learning, in order to improve educational outcomes.

Dewey said students, along with others in the community, regularly experience this messiness, and research shows theater can allow a connection to this condition in a more successful way than watching films, reading or taking in a lecture.

The piece deals with comparison thinking, which Dewey said is something “we can all fall into that can lead some to feel chronically inferior,” perhaps leading to feelings of inadequacy and depression, which can be the tip of much larger problems.

Seeing situations played out on a stage that students may be going through themselves engages them and grows their tolerance and understanding, she said. 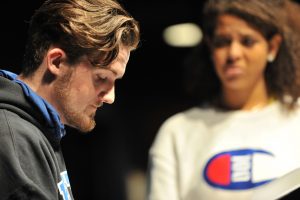 “Helping our students wrap their heads around serious issues they face or they see others facing takes a variety of approaches, and seeing theater is a valuable piece of that ‘helping,’” she said.

There is also a “talk back” at the end with the actors, playwright and director, which Dewey said is also extremely helpful to students.

Orndorff said a focus of the content is about the importance of “doing your own thing” and to quit looking at everybody else — something that has escalated as social media usage has increased.

Miles agreed that this is an important sentiment for everyone to understand. In her work with ASAP, she said it’s easy to see that mental health issues, like anxiety and depression, are closely related to substance misuse and addiction.

“Kids compare themselves to what they think are others who are smarter, prettier, stronger, have more friends … and do that ‘comparison thinking’ that leads to feeling bad about oneself,” Miles said. This can all lead to anxiety and less focus on who they are and what their strengths and gifts are.

She said she likes that the play is focused more on mental health, because of how it intertwines with addiction issues; it’s a way for students, their parents and teachers to “think through how we have come to know ourselves as we grow and develop,” she said.

Miles said she is also happy Orndorff wrote the play. 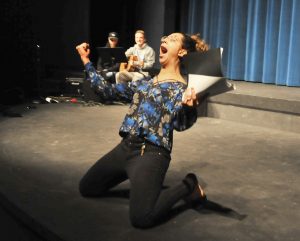 Brittany Voll gives it all she’s got during a rehearsal for “The Piano Paradox.” The play is offered free to the public Thursday night at Danville High School. (Photos by Nick Lacy)

“She is amazingly creative, and I marvel at her ability to turn issues into theater. And Mimi is strongly committed to the arts addressing community problems, as well as just being entertaining,” she said. Dewey “pulls together the behind-the-scenes tasks so well,” she continued.

Maggie Myers also helped brainstorm over play ideas, Miles said; she works at Danville High School. “Maggie represents the crucial importance of Family Resource Centers and Youth Service Centers in our schools. I am thankful to be a part of a community with all of this commitment and talent.”

“The Piano Paradox” will be performed for the public 7 p.m. Thursday in Gravely Hall Performing Arts Center at Danville High School. The show is free.