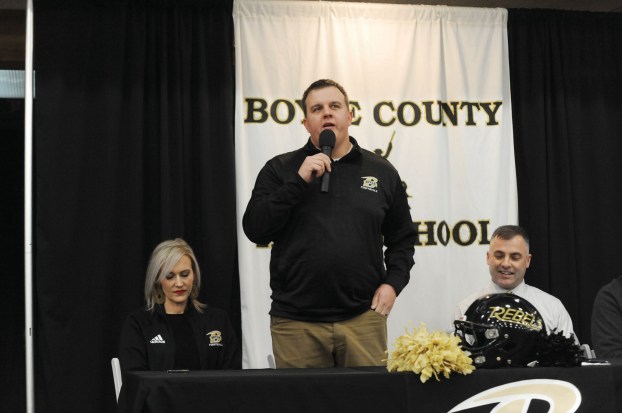 When Chuck Smith announced his retirement before Christmas break, it sent the rumor mill in overdrive. The biggest question on everybody’s minds was how Boyle County could replace a man who won six state titles and cemented the city of Danville as “Title Town”. In former Corbin coach Justin Haddix, the Rebels found a man fully prepared to take on that task of replacing a legend.

“Over here you’ve got eight state titles — Coach Smith won six — a lot of people say ‘You don’t want to follow this guy,’” Haddix said at his introductory press conference Thursday night. “Coach Smith is a great coach — I know that — but me being a competitor, that’s a challenge. Our kids, we’re all going to compete and accept that challenge every day. That’s what drives me — being a competitor. I don’t care what we’re doing. Ping pong, checkers — I’m going to try to win. Anything we’re going to do, we’re going to try to win.

“I embrace that pressure.  People say you don’t want to be the guy after The Guy. I’m a competitive person and I’m looking forward to that challenge.”

Boyle County has been a program on Haddix’s radar ever since he was a quarterback at Western Kentucky University. There he had former Rebel safety Brad Cloud and Chuck Smith’s son Brandon as teammates. That’s when he learned that Boyle County was for real.

“We’d always talk about it — everybody wanted to say their high school was the best. Well when Brad Cloud pulled his hand out, it had four rings on it and that meant his was the best,” he said to laughter and applause from the crowd.

Haddix said that while Cloud and Smith reached out to him while he was in talks with Boyle County to take the job, it was words from his wife, Dr. Melissa Haddix, that made the choice easy.

“She said ‘Justin, it’s Title Town. You have to do it. This is where you want to be.’ It’s a special place, I know that. I can see that tonight,” Haddix said.

That anecdote highlights another important thing about Justin Haddix — a strong relationship with his family.

Boyle County principal Mark Wade told the story of waiting for the phone call to learn if Haddix was going to take the job or not.

“A little after three and my phone rings and it says coach Haddix and I’m like ‘Yeah. Here we go,’” Wade said, after talking about how nervous he was all day. “I answer the phone and coach Haddix says ‘I got something for you.’ and the phone went silent. I hear the phone shuffle around a little bit and I hear ‘One…two…three and I hear his kids shout Go Rebels!’”

His family was in attendance at Thursday’s introduction and filled three tables. Haddix assured Rebel Nation that they’ll be at every game Friday night and just as loud as the rest of the fans.

Haddix leaves behind a good legacy at Corbin, where he coached for six years. He said the decision was hard for him to leave the school that he helped elevate and will be cheering for and helping out his former players every game “unless I’m on the other sideline.”

Still, he said that he knows he made the right choice and that was reaffirmed the first time he met his new team.

“I came up the other morning — it was after I cleaned out my office at Corbin and I didn’t feel like I had a team… So I came up and got to meet the team and see them work out,” he recalled. “It was something special and that just reaffirmed that I was in the right spot. This is where I want to be.”

Above all though, Haddix is poised to carry on a legacy of success for the black and gold. Or as Mark Wade says, “Coach Haddix is a winner and we, as Rebels are accustomed to winners.”

Ads run away from Collegiate, advance to second round

RICHMOND — The Danville Admirals handled the first challenge of the All A Classic with relative ease, topping Louisville Collegiate... read more