Darrian Bell a symbol of what hard work can do 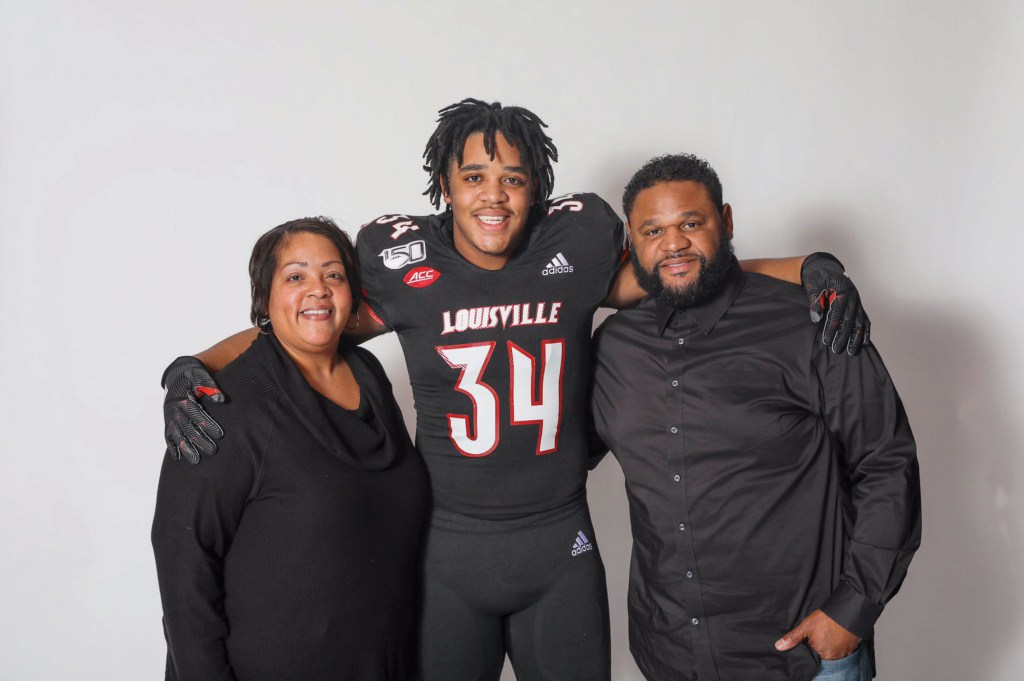 Darrian Bell poses with his parents in his announcement that he signed with UofL. (Photo from Twitter)

Darrian Bell hopes the legacy he leaves behind at Danville High School will be that a “great work ethic and focus” can let you do whatever you want to do.

“To continue to work hard when adversity comes. To get your grades because a lot more doors are opened when they are good and even if you can’t get a scholarship like me, you can still go for free and then work to get a scholarship later on. Also it’s not all about D1. Other divisions have so much to offer,” Bell said.

The senior football player recently decided to join the University of Louisville football program as a preferred walk-on. He’s been a mainstay not only on the Danville football team for three years, but also the basketball team where he does all the dirty jobs — rebounding, defense, taking charges, diving for loose balls — that not every player wants to do.

He was the leading tackler on Danville’s 2017 state championship team as a sophomore. He finished his career with over 400 career tackles and was named The Advocate-Messenger Defensive Player of the Year. He had several college options — Centre, Hanover, Kentucky Wesleyan and University of the Cumberlands — before deciding Louisville and the chance to play in the Atlantic Coast Conference was best for him.

“I appreciate the relationships I’ve created with some coaches that were recruiting me. Some supported my decision and wished me luck on my journey,” Bell said. “It was really fun to see all the schools and campuses I visited. They all had their special features. It’s also great to just have the weight and pressure off my shoulders about where I should go.”

He’s often been told he’s too short or not quite fast enough to play Division I football. It never stopped him from believing he could and Louisville is giving him that opportunity.

“When I challenge myself. I see I become better at whatever I do. I’ve worked hard all my life and pushed myself to the best football player possible,” Bell said. “This is a great opportunity and I want to take advantage of it and see how I measure up.

“Others and I believe I can play at that level, so why not. I also think once I get up there and prove myself I’ll have a good chance to get on scholarship.”

Former Danville football player Sha’Don Brown is the secondary coach at Louisville. Obviously he was the lead recruiter on Bell but also made it clear the opportunity was not presented because of Brown’s connections to Danville.

“He just told me that this is an opportunity for you. He didn’t pressure me. It was really a decision I made,” Bell said.

However, this was not just a football decision for Bell, an honor student. He wants to major in sports administration  and knows attending Louisville gives him the chance to obtain the major he wants.

“Also being D1, I will get a lot of big-time connections to create a network to be higher up in the ranks and better my chances of getting that job (I want),” Bell said. “I just hope it will enable me to manage a stadium or a big sports facility and help kids reach their dreams while doing it.”

Bell got a big reaction from his teammates when he told them he would be playing for Louisville. Bell said he felt his decision made teammates “proud” of him and some even called him “Mr. D1” after his announcement.

“Some are Louisville fans and they loved the fact that I was going to have an opportunity to play for their team. The next day they talked about getting a jersey with ‘BELL’ on the back,” he said.

Obviously he says he’ll cherish the 15-0 state championship season in 2017 but will also fondly remember the 6 a.m. workouts more than anything else.

“They made me the football player I am and helped bring our team together as brothers,” Bell said.

The leader, though, clearly was Bell who never seems to have a down day in football, basketball, academics or anything else.

“I am just a ‘roll with the punches’ guy. You can’t get down too much on yourself too much. You just have to keep pushing,” Bell said. “You can only control yourself, your actions, your attitude and how you treat people. So I just keep that in mind as go through each day.

“I like to always give a good effort. As long as you do your best, nobody can really fault you for what you’re doing and I always try to make good impressions on everybody so they don’t (fault me).”

Mason, McCulley root for each other every game but…