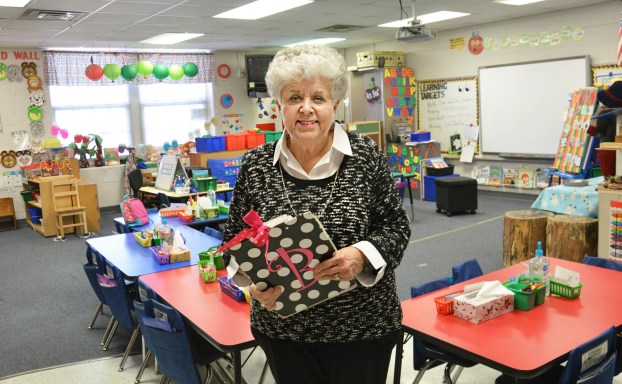 Perryville Elementary School kindergarten teacher Gayle Best stands in her classroom surrounded by little tables and chairs. She says she doesn't have a desk of her own. (Photo by Robin Hart)

Perryville Kindergarten teacher has instructed generations in her classroom

Mrs. Best has “25 little busy bodies” who stay busy all day long. And that’s what makes her want to go to work every day.

Gayle Best is one of two kindergarten teachers at Perryville Elementary School, a job she’s cherished for 47 years. And over the decades of teaching Perryville’s 5-year-olds, Best has seen many changes in her students, classroom and the world around her.

Best, who was Gayle Stewart before she married, was raised in Perryville, attended Perryville Elementary from first through eighth grades, and returned after graduating from Eastern Kentucky University in 1973. She says that was the year Kentucky Department of Education first offered a pilot kindergarten class in all public schools. She took the kindergarten teacher position in her hometown and she never left. 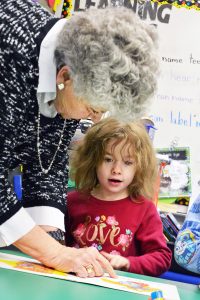 Addie Taylor watches as her kindergarten teacher, Gayle Best points out the word that goes with a picture in her beginner’s book. (Photo by Robin Hart)

Sitting on a small ottoman in her classroom, Best looks around at the tiny tables and chairs where baskets of crayons and markers are set out, and the walls covered in letters, words, numbers and pictures of animals all in primary colors. Best says she doesn’t have a desk.

She laughs and says she tells the young teachers, “I’m the old fossil and they’re the Barbie Dolls.”

Best learned modern technology along the way by teaching some lessons with the use of tablets. But she always tells parents and caregivers, “Don’t let an app take the place of your lap,” when reading to their children. That’s one of the most important pieces of advice she gives.

Kindergarten students today are growing up with computers. They get immediate satisfaction from computer games with lots of action, she says.

“They want to hurry, hurry, hurry,” and always go on to the next level or activity, she says. “They hate to color.”

That’s disappointing, because coloring helps the youngsters’ develop fine motor skills they’ll need to have to be able to write, she explains.

“It’s weak in all the children.”

Some of her students come into kindergarten and never have held a crayon or used safety scissors. She says when she was a child, coloring was fun and relaxing. But the children today think it’s boring. 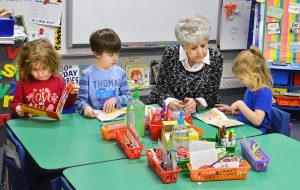 Kindergarten teacher Gayle Best, sits at a little table in her classroom as Addie Taylor, left, Emerson Crutchfield and Skylee Childers try to read their books. (Photo by Robin Hart)

Students start school with a wide range of abilities, including vocabulary, counting, color recognition and even reading. It’s her job to make sure the more advanced students continue building on their education foundation, while she also works to get students who are behind the kindergarten level up to where they need to be in order to be successful in first grade.

By the end of the school year, “I hope they know all letters and numbers,” and can recognize a few simple words, she says.

She stresses that parents need to help teach their children by reading to them at home, going to the library and interacting with them whenever they’re together. A trip to the zoo would be great, too, she adds.

“Routine is so important to a 5-year-old,” Best says. That’s why she has the same routine for her students every day.

First thing in the morning, her students have “morning tub time” where they can pull down tubs filled with blocks, Legos, books, puzzles or plastic animals to play with. She uses this time to take a few students aside and give them extra one-on-one instruction.

Then, they have reading and math lessons before lunchtime. Special classes including P.E., art, music, library and Spanish are first in the afternoon; then, they work on sight words and writing skills. The children are given a snack, then have recess before heading home.

Best says skills previously taught in first grade have now “been pushed down to kindergarten.” She wishes more playtime could be incorporated into kindergarten classrooms.

“Children learn through play. … They need an even balance, she says, then wonders, “Are we pushing them too much?” 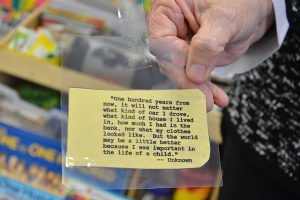 This saying is something Gayle Best is inspired by every day, she says. 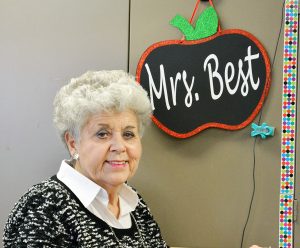 Gayle Best has been a kindergarten teacher at Perryville Elementary School for 47 years. (Photo by Robin Hart) 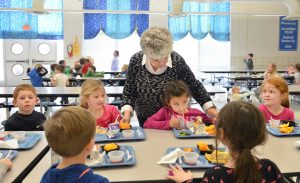 Perryville Elementary School kindergarten teacher Gayle Best, visits with a few of her students during lunctime one day this week. (Photo by Robin Hart)

She’s always looking for new ways to teach her students by “pulling new things out of my hat. … I try to stay one step ahead,” Best says. “I have these little precious babies to educate.”

Architectural firm Brandstetter Carroll came through on its promised redesign of the Weisiger Park fountain for the City of Danville.... read more