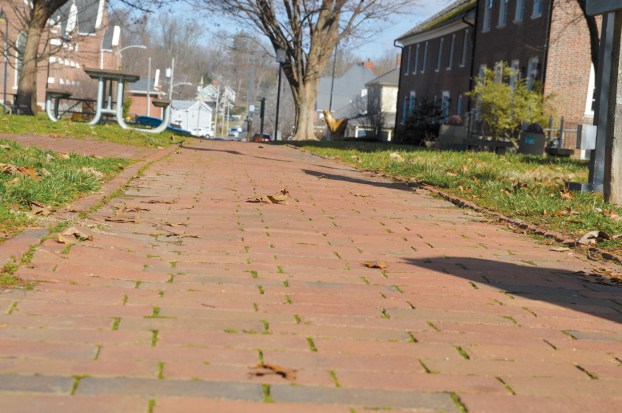 Uneven brick on the sidewalks at Constitution Square Park have resulted in some dangerous situations for visitors there, the tenants say. (Photo by Bobbie Curd)

Boyle County has delayed formation of a committee that would recommend improvements to Constitution Square Park until mid-February.

Some magistrates said they came prepared to vote and create the committee at the Boyle County Fiscal Court’s Jan. 28 meeting, but Judge-Executive Howard Hunt said he had not realized that a list of names of potential committee members needed to be reviewed by a “little-used” board of appointments, which is made up of some county magistrates.

Magistrate John Caywood said he appreciated Hunt taking the extra time to let magistrates review the list of more than 21 names for possible inclusion on the committee, which was previously expected to have seven members.

“I think it’s a great chance to really do something that could affect the whole community and be very rewarding for all of us,” Caywood said of the planned committee.

But Magistrate Jason Cullen said the court needs recommendations from the committee it can take action on sooner than later.

“What’s the timeline on this?” Cullen asked. “Because I don’t want this to be like other things we’ve done, where we’ve kicked it down three or four months down the road.”

“We’re getting ready to go into spring here … we need some things done with that square, and I don’t want this (committee formation) to be done, get finished in July, and then we still have people tripping on sidewalks and stuff like that.

“I don’t see that,” Hunt responded.

The fiscal court first planned for the committee’s creation after a Jan. 16 special meeting, which included a tour of Constitution Square to see the various maintenance issues and a discussion of the current arrangement that allows partner agencies of the Economic Development Partnership to use the building spaces at the park.

Some magistrates have speculated that at least some of the office space at the park is currently under-utilized and could generate more revenue for the county if it were leased out at market rates.

During Tuesday’s discussion, Magistrate Ronnie Short said the county didn’t need the committee in place before it took action to repair sidewalks at the park. Cullen responded that plans for sidewalk repairs had been tabled previously in order to form the committee first.

Treasurer Mary Conley noted the county did not budget for any “real huge sidewalk repair” at the park, and the repairs being talked about now “may cost a reasonable amount of money.” Magistrates would likely have to spend money from the county reserves on sidewalk repairs in order to maintain a balanced budget, she explained.

Cullen said County Engineer Duane Campbell had been asked to get estimates for the cost of the sidewalk repairs; Campbell said those estimates are in process.

Magistrate Jamey Gay said he thinks it is important that the county have a structure and guidelines in place for the committee, so the members will know what they should and shouldn’t be doing.

“More importantly, we need to have a safe park, where people aren’t getting hurt,” Cullen said. “We can’t afford all the things .. that we want to get done. We certainly can’t afford a lawsuit of somebody falling.”

Hunt said the sidewalk between Walnut and Main streets is “the most unstable of the bunch” and the one that needs to be fixed first.

“We need to get some estimates and get on it instead of waiting,” Magistrate Phil Sammons said.

Cullen again pushed for a quick resolution to the formation of the committee.

“Can we get to a timeline and actually stick to it?” he asked.

Hunt offered the court’s last meeting in February as a date for a vote on the committee; Cullen and Magistrate Tom Ellis said they would prefer to do it sooner, at least no later than the court’s next meeting on Feb. 11.

“Who knows what else is going to get us by the end of February, so let’s just act,” Cullen said.

A struggle to get around   What is holding Boyle County back on economic development? According to a class of... read more