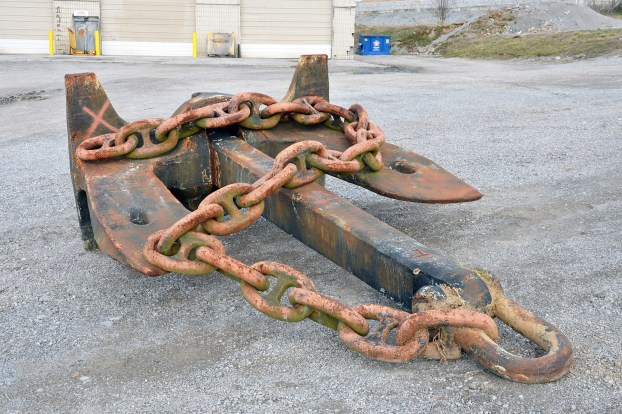 A 12-foot tall Navy anchor with a 22-link chain is sitting at Caldwell Stone Co. where it will be sandblasted and painted for Danville High School (Photo by Robin Hart)

Danville Admirals newest anchor is a real one, surplused by Navy

A 14,000-pound, 12-foot-tall, 6.5-foot-wide, iron Navy ship anchor and chain is now sitting at the local rock quarry, where it will be refurbished before anchoring permanently in front of Danville High School.

U.S. Navy Captain and 1979 DHS alumni Dan Stallard, who was instrumental in getting the anchor donated by the U.S. Navy, said in an email, “I have longed to find a Navy anchor for the front of our school. For me, an anchor represents steadfastness and hope. This anchor is dedicated to all DHS Alumnus.”

During a Danville Board of Education work session in November, his older brother, Chuck Stallard, told the board Dan had been in the Navy and Marine Corp for more than 30 years. He is currently stationed in Jacksonville, Florida. Chuck Stallard said his brother had “been watching high and low over the last few years” for an anchor that could be donated to the school.

He found a surplus anchor at the Naval Construction Battalion Center in Gulf Port, Mississippi, several months ago, and filed the federal paperwork that was needed for the transaction. Then, the paperwork was sent to Frankfort for state approval for the school to accept surplus property from the federal government, Chuck Stallard said.

The Danville Schools Education Foundation & Alumni Association made arrangements to have the anchor hauled to Danville, which ended up costing about $2,000.

The chain attached to the anchor, which was donated to the The Danville Schools Education Foundation & Alumni Association weighs about 2,000 pounds.(Photo by Robin Hart)

The anchor and its attached 22-link, 2,000-pound chain, which is an unusual combination, will be sandblasted at Caldwell Stone Company and painted.

The foundation’s plan is to place the anchor in the middle of the sidewalk leading up to the front steps, Chuck Stallard said.

Work will have to be done to reinforce the area and sidewalks will be built that curve around the anchor. Benches may be placed around it too.

“People will see the anchor,” he said. “It will be very distinct. It’s a good visual for our schools.”

Dan Stallard said DHS has two other anchors on its properties. The first anchor was placed in 1975 by the gym entrance on Proctor Street. A second anchor sits at the football stadium on Stanford Avenue.

“Now the alumni are getting another anchor to be placed at the high school in honor of all DHS alumni,” Dan Stallard said. “Anchors symbolize strength, steadfastness and hope. Our alumni anchor is a tribute of all who have gone before us; those who have graduated from our great school to go out in the world to do good. This anchor will be a reminder to current and future Admirals our school is a place to learn to give back to our community and be good citizens.”

The entire project is being funded through alumni and community donations. To donate, go to www.admiralalumni.org/give. Donors of $25 or more will receive a commemorative sticker. 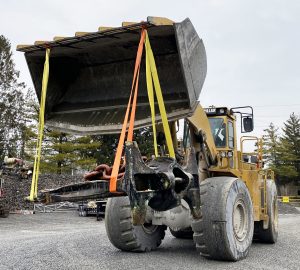 Last week the anchor donated by the U.S. Navy, with the help of Danville High School Alumni Dan Stallard, arrived in Danville. The anchor and chain, weighing about 16,000 pounds was moved by a Cat 988F wheel loader at Caldwell Stone Co. on Stanford Road. (Photo by Clay Albright)

The Boyle County Conservation District is scrambling to help find an affordable solution for local farmers who need to dispose... read more