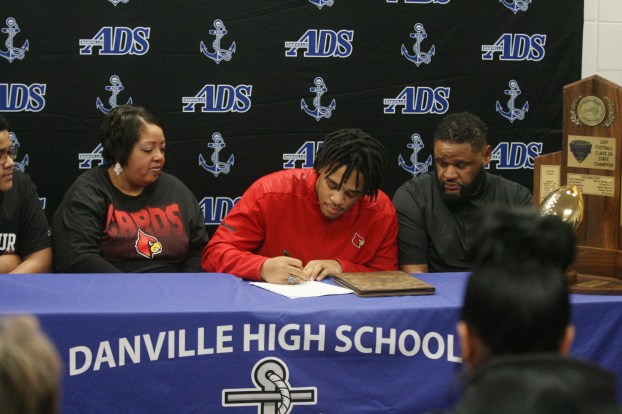 After a lot of deliberation about where he was going to continue his football career in college, Darrian Bell signed with the University of Louisville a couple of weeks ago. On Wednesday’s National Signing Day, he made it official.

“It’s a special day for a special young man,” Danville football coach Clay Clevenger said about Bell. “This year coming up will be my 20th year of coaching — so I’m getting old and I’ve coached a lot of guys. But I’ve not coached any that’s been more special than this young man who’s signing today.”

One of the first things that anybody will tell you when you talk to them about Bell isn’t the athlete that he is — although he excels at four sports — it’s the kind of person he is.

“I can just add to whatever anybody else says,” Danville basketball coach Ed McKinney said. “People say that because you just don’t see those kinds of kids — he just really stands out. He does everything that you want a young man to do — school-wise, athletics-wise and the way he treats people — he’s just a quality person. It really shows in everything he does.”

“Darrian, to me, exemplifies what a student-athlete should be,” Clevenger added. “From his work ethic to his character to his commitment to excellence in anything he does. Whether that be on the football field, basketball court, classroom, leading FCA (Fellowship of Christian Athletes) and starting the bass fishing team — everything he does and everything he touches turns to excellence.”

More than just that, Bell is a natural leader in everything he does — be it athletics or academics.

“He doesn’t have to be vocal at all. He truly leads by example every day,” McKinney said. “You can’t just flip a switch on that. One thing about young kids, they see through fake pretty easily. There’s a lot of kids that want to lead but don’t have all the intangibles that Darrian does. Not too many roll through like him that do it in every aspect of life.”

An emotional Clevenger talked about Bell’s last game with the Danville football program. The season had just ended after a loss at Somerset.

“A lot of times, kids will be crying because they just played their last high school game and it’s a sad moment. Here comes Darrian. He jogs up to me because we run everywhere we go,” Clevenger recalled. “He looks at me and says ‘Coach, no regrets.’ It chokes me up a little bit because he did it the right way. Scoreboard didn’t reflect what we wanted in terms of wins and losses — but he did it the right way so he’s a winner.”

Bell told his teammates that he was going to UofL before anybody else, and in a video shared on Twitter, was mobbed by the team after the announcement.

“I went to that camp this summer with Corydon Crawford and we had the same shirt so he wanted to take a picture together in that,” Bell recalled. “He’s a Louisville fan so was pretty hyped about it. Everybody was hyped about it — calling me Mr. D1 or D1 Bell.”

As for the D1 label, that’s not something that Bell is thinking about.

As for Louisville over the University of Kentucky? He’s already had coaches tell him that he’ll never get them to throw up an L, but they’ll be cheering for him at least.

Once he graduates — which he was quick to point out that he hasn’t done yet during his signing — he’ll leave a hole at Danville High School that extends beyond the playing fields.

“It’ll be tough and he’ll be missed in a lot of things around here,” McKinney said. “It’s going to be as big a loss in basketball as it is at school, in the hallways. The kind of student that he is. Everything’s easier when you’ve got a kid like him.”

In the first rematch of a district game, the Lady Admirals completed their first sweep of the season, knocking off... read more