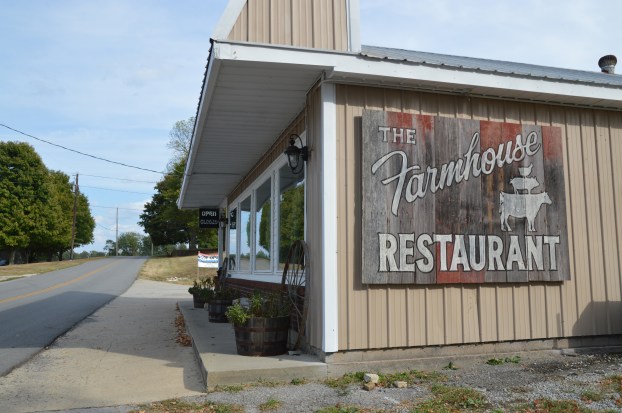 The Farmhouse Restaurant, located on Alum Springs Road in Parksville, could benefit from county-wide alcohol sales according to Magistrate Jason Cullen

County-wide alcohol sales could be on Boyle’s ballot

Boyle County residents may get to vote on whether to legalize alcohol sales county-wide this November.

A group of citizens who support the legalization of alcohol sales in all of Boyle County are attempting to collect enough signatures on a petition to make the ballot question possible.

Magistrate and local business owner Jason Cullen is part of the group; he said the group believes it’s common sense that if the cities in Boyle County can sell alcohol, it should be allowed in the rest of Boyle, too.

However, if the petition gets the required 2,621 signatures, it will ultimately be up to Judge-Executive Howard Hunt to allow it to be added to the ballot, according to County Clerk Trille Bottom.

Hunt said at this time, he has “no opinion on the matter.”

“There’s a big misconception that people can get drinks in all of Boyle County, but it’s not the case,” Cullen said.

Cullen said some may believe that if a county-wide alcohol vote failed, it could affect the cities’ ability to sell. But according to KRS 242.125, “Once a city becomes wet under this section separate from the county, a countywide local option election establishing the county as dry territory shall not cause the city to become dry territory.”

The petition is due by Aug. 9, and must have 2,621 registered Boyle County voters’ signatures on it; Cullen said they’re aiming for 2,700. Bottom said her office will verify the count and that all are registered within Boyle, then deliver it to Hunt’s office.

“And if he chooses to do so, he can sign an order — because he can approve or deny it — having the verbiage put on the ballot for November,” Bottom said.

The wording of the question would be, “Are you in favor of the sale of alcohol beverages in Boyle County? Yes or no.”

“I really don’t know much about it,” Hunt said of the petition. “I’ve not made my mind up right now.”

Hunt said he didn’t realize his denial or approval was part of the process.

“This is not an initiative of which I’m a part of,” he said. “I don’t have any opinion of whether or not right now.”

When asked if that means he’s received pressure from those who are not in favor of alcohol sales in the county to keep the measure off the ballot, Hunt said he’s “not aware of pressure on either side.”

Cullen said he’s been very open and honest about his aim.

“If we can pull back some of the (recent increase to the) payroll tax, I’ll try,” he said. “I’d like to pull it back. I understand the reason for it — I’m on the finance committee, so I get it. But it’s a double-edged sword. We need to find different ways (to get more revenue) than taxing people.”

Cullen said as a business owner, “I have 20 employees who live paycheck to paycheck. It’s hard for me to sit here and have them taxed more when we can find other sources of revenue,” such as a consumption tax.

When asked about his thoughts on reducing the recent payroll tax increase, Hunt said, “I’m sorry. It’s too premature to make an assessment on the value. But, you know, once you have something like a county-wide … it’s too speculative for me to venture a guess.”

Cullen offered the example of Beau and Nicole Cacciatore’s restaurant in Parksville, The Farmhouse. Beau Cacciatore has said the fact that they can’t sell alcohol “really hurts him when he’s trying to compete with other places people want to go to when they get done working … it really puts him at a disadvantage,” Cullen said.

“After considering several options for smaller-scope precinct elections, the best and fairest approach was to pursue a countywide vote,” Lassiter said.

Other existing businesses in the unincorporated areas of the county, like event center venues, would also benefit, he said.

“This would also open the possibility for distillery, winery or brewery operations to consider locations outside of the three cities,” he said.

Cullen agreed, adding that it’s “kind of bizarre Danville is now listed on the Kentucky Bourbon Trail (for Wilderness Trail Distillery) yet still has a dry county …”

Lassiter also pointed to vacant buildings in Parksville, Mitchellsburg and Forkland, which have been up for sale for some time and could be developed as convenience stores, restaurants or other businesses.

Lassister said the EDP board “has not taken a position on this issue” and the assistance provided to local businesses so far has been “part of the support services we regularly provide” to businesses and to attract new ones.

However, “as an economic developer, I support an environment across all of Boyle County where businesses can compete on a level playing field,” Lassiter added.

The Facebook page was just created this week. There’s a link on the page, which takes you to the website for Develop Danville, the marketing name for the EDP. From that page, people can download the petition, sign it and return by mail or in person to the following locations:

The petition is also available at both Hub Coffee House & Cafe locations, on Ponder Court and Main Street.

As a business owner and resident of Boyle County, Cullen said he’s passionate about offering the choice to other citizens.

“Just as a side note, I don’t drink,” he said. “But I’m the one who signed the intent to do this,” referring to the first step of filing the intent to circulate a petition with the county clerk’s office.

“I’ve used the example — if somebody wants to go get beer that lives in Old Bridge, in my district, they have to drive by Old Bridge General Store, go to Chills on Lexington Avenue, and turn around and drive back to Old Bridge,” Cullen said. “That’s not to say that the general store wants to sell, but they will have the option … And the golf club — you can buy alcohol in there, they have a special designation. This just gives the county an option for increased revenue that’s not based on payroll taxes.”

Hunt said, “I have no opinion on it, either way, as of right now. It hasn’t been on my radar screen until (Cullen) mentioned something about it in court yesterday.”

Boyle magistrates tied up on flowers again Boyle County magistrates have a lot on their plates these days — a... read more