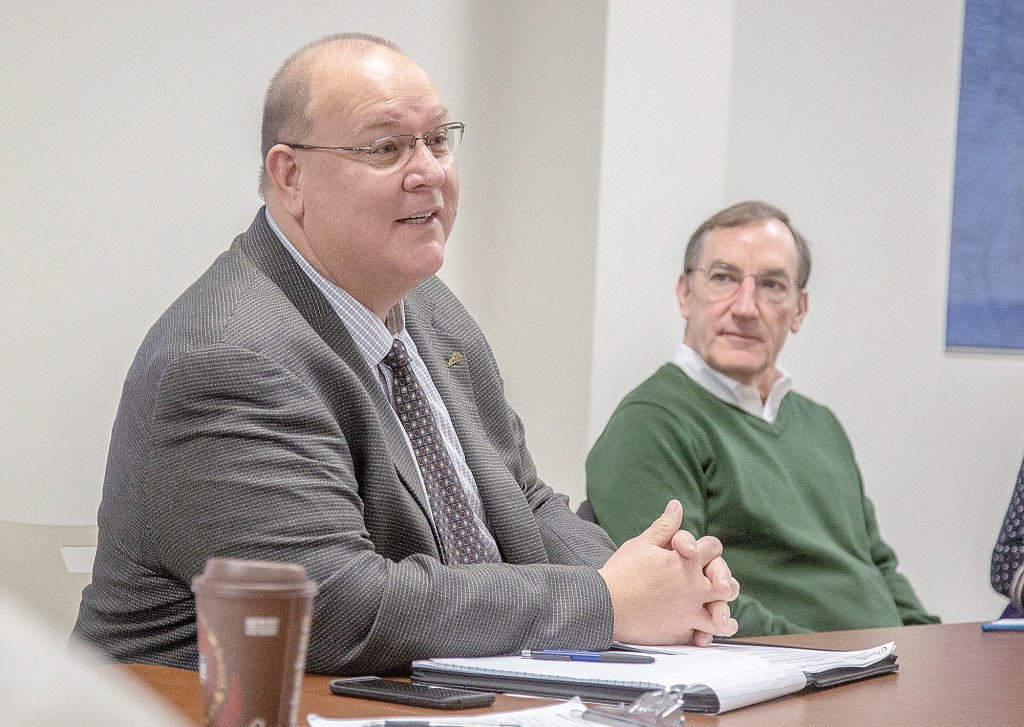 Danville City Manager David Milliron speaks during the January meeting of the Economic Development Partnership Board of Directors. Milliron plans to opt out of the Kentucky Retirement System and stick with a retirement package from the International City Management Association, a move he says will save Danville roughly $91,000 over five years. (File photo by Ben Kleppinger)

Savings may be used to boost starting pay for first responders

In order to find money to fund “dire emergencies” in public safety, new City Manager David Milliron has opted out of the Kentucky Retirement System. He said this means that over the next five years, the city will save roughly $91,000, which he plans to use in order to offer better starting salaries for police, fire and 911 communications recruits.

Monday, Danville City Commission approved an amended contract for Milliron, who will be paid $135,000 a year.

City Attorney Stephen Dexter told the commission that according to state law, Milliron is allowed to opt out of the Kentucky Retirement System “as top administrative official, due to his otherwise sufficient retirement coverage” with the International City Management Association (ICMA).

The contract had previously stated it would also fund Milliron’s ICMA retirement account, at $7,000 annually. Now, that has changed to “an amount equal to the maximum annual contribution limit for 401K plans as determined by the federal government.”

Milliron said, “For full disclosure, yes this is a net savings to the city, and it’s my intent to actually, dollar-for-dollar, to quickly take the savings and address some of the starting pay — we have dire emergencies in both police and fire, even communications 911, on being able to recruit and it boils down to start pay.

“We’ve got to start somewhere … if I can at least start to get folks into the pipeline in our public safety by increasing their start salary, I had to find money. So this is one attempt to sort of find money that otherwise the city was going to pay. But it doesn’t stay with us … so this allows the dollar to stay local and work with our department heads in those areas and increase starting salary.”

He clarified that this “doesn’t mean everyone else’s salary is increasing. That’s going to have to go through the budget process …”

Dexter and Milliron both said no.

“It just changes that he will not participate in the Kentucky Retirement System, he will simply have the ICMA, which is like an IRA account, essentially,” Dexter said.

Atkins said, “It’s not connected to the government, right?”

Dexter said, “I would venture, without looking at the model, that the rate of return would be better than the state pension system.”

Commissioner Kevin Caudill made the motion for approval with Terry seconding it, before it was passed unanimously.

Milliron to rent from city

The commission also unanimously passed a rental agreement for the home located at 41 Tuggle Road on five acres, which the city previously purchased in order to construct a water tower.

Mayor Perros said, “Full disclosure, the occupants of that will be our new city manager, since he has been unsuccessful in finding suitable housing in Danville at a price he thinks is fair.”

City Attorney Dexter explained the idea was suggested by former City Manager Ron Scott during his transition period with Milliron.

“In the absence of a quick residence find on the market, that would be a suitable transition housing opportunity,” Dexter said.

He pointed out that the city is not receiving any income from the property now, and has “no intention of a long-term lease option for Mr. Milliron, or anyone else for that matter.”

He said the use of the property “is a bit unknown, other than the location of a water tower, as that project is deemed ready-to-build.”

The city is renting the home on the farm to Milliron for $1,200 a month, which does not include any rights to the rest of the farm. As a condition of the agreement, Milliron will install a small fence, which he will pay for, as well as provide appliances for the home.

“At the end of the tenancy, he can take the appliances with him or deduct them from his rent and leave them,” Dexter said. The city has the option to retain the home for “potential temporary housing in the future, for recruitment efforts … or guests of the city.”

The agreement also doesn’t negate a contractual obligation that Milliron must find a “permanent residence within the municipal bounds of the district within a year,” Dexter said.

The agreement is a month-to-month relationship, which will “allow him to get out of a hotel … until he can secure a permanent residence.”

Commissioner Caudill made the motion to approve, with Commissioner Rick Serres seconding it.

Mayor Perros said for many years, the Danville-Boyle County Airport Board of Directors has had a six-member board. “It’s the only organization I know that’s ever had an even number of people on the board. But if you check KRS, which we did, it says that airports can have boards consisting of six or 10 — problem is still not solved.”

Perros said the airport board, “to their credit, have seen fit to expand their board, as they are beginning to see a broader vision for the airport.”

He said the county was naming two additional board members, and he made the recommendation to the commission of Jake Bell and Doug Gooch.

“In addition, I need to explain that the airport board is seeking to add two people from Lincoln County. Now, that’s a big step, because there’s always been a little bit of — the boundary fence, literally and physically. And they recognize that Lincoln County is a big part of the vision going forward.”

Perros said Gooch is president and owner of AGE Engineering Service, and also the chairman of Lincoln County’s Industrial Foundation. He said Bell “used to fly for United Express, he starts this week with Delta Airlines.”

Commissioner Terry asked how many this means will be added to the board — Perros said four total, including the two Boyle County Fiscal Court were planning on approving.

“So we’re still at an even number?” she asked.

Commissioner Atkins made the motion to accept the two recommendations, and Terry seconded it. The appointments were unanimously approved.