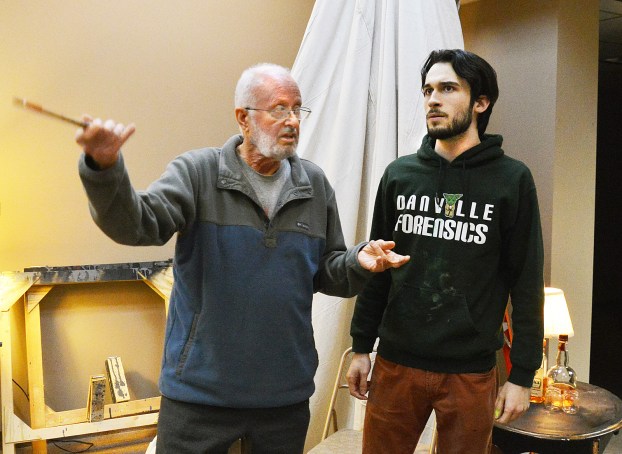 Scarlet Cup Theater is deep into rehearsals for its fifth season’s production, “RED,” opening on Thursday, Feb 27. And staffers at The Advocate-Messenger have been listening in.

“RED” was first set to open at the old Cue restaurant location on Main Street, but the theater had to find a new venue due to a new restaurant moving in and starting renovations there. Now, the play will go on in the old newsroom of the Advocate, located just steps away from its current newsroom, inside of the 330 S. Fourth St. building where the newspaper is located. 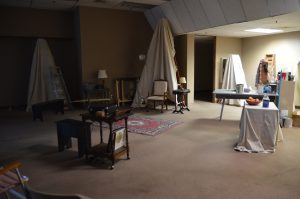 The former newsroom, located down the hall from the present newsroom of The Advocate-Messenger, is being reinvented by Scarlet Cup Theater to represent artist Mark Rothko’s studio space. Scarlet Cup aims to present creative pieces in unique venues.

As far as the quick venue change and move, Scarlet Cup’s founder Liz Ordndorff said, “The cast was remarkably adaptable. In fact, they prefer the new space because of its size. We could do more decorating with ladders and canvas that we couldn’t do at Cue. So all in all, it was a blessing wrapped in a challenge.” 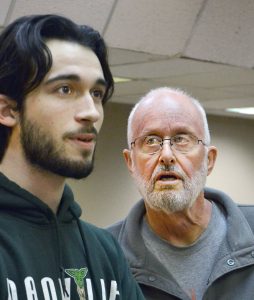 Orndorff said the piece was chosen in keeping with Scarlet Cup’s tradition of telling the most dramatic stories in unique venues. The play is set in Rothko’s New York City studio, a deserted gymnasium where he made his art. It covers a two-year period when he was working on murals for the Four Seasons restaurant in the Seagram Building in Manhattan.

“It was the largest commission ever received by an American artist up to that time,” Orndorff said. Rothko struggled with the idea of selling out to commercialism; he eventually took the paintings back and returned the money.

The play won six Tony awards in 2010 when it opened on Broadway. It was written by John Logan, who penned the James Bond films as well as science fiction classics.

“Tony Haigh of the Scarlet Cup board suggested this piece,” Orndorff said. “It’s beautifully written and is an acting tour de force” for Kagen-Moore and Winfield. 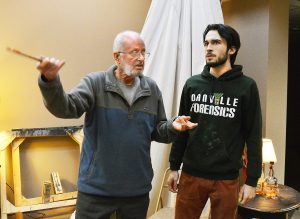 She said because of the simplistic set, it allows for more creative staging and acting. “For instance, instead of mixing and applying paint all over the place, the actors mime doing the big murals in a choreographed  ‘dance’ to classical music. It’s beautiful — and you never miss the paint.”

Orndorff said the piece will appeal to a wide range of ages, “because there are so many life truths — and humor — that come out in the conversation between Ken and Rothko.” It is essentially putting the artist’s personality under a microscope, she said, and seeing what makes him tick.

“I imagine anyone 16 or older would understand it,” she said, noting it’s rated PG-13 for language.

Orndorff feels it would be helpful for anyone planning to see “RED” to attend the background talk, offered at Boyle County Public Library on Feb. 23. The theater offers these talks in order to enrich the theater experience for audiences.

“This year, we have Dr. Peter Haffner, an art history professor who is new to Centre. He will tell us about Mark Rothko and take questions.” 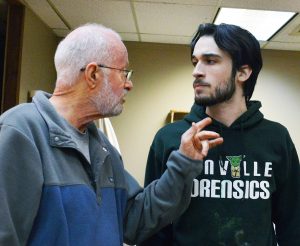 As for what she hopes audiences take away from the play, “I think it is fascinating to see the thought processes of people who create art, who take it seriously, who feel the pain of rejection … It is an amazing glimpse into the artist’s psyche. Rothko did go on to commit suicide about 11 years after this play is set.”

This season, Scarlet Cup is beginning a new curtain time of 7 p.m. Thursdays-Saturdays, but the Sunday matinees will still be at 3 p.m.

Aside from the talk, Orndorff said to ensure a full-on community experience, Jane Barleycorn’s will offer special dinner promotions for the full run of the play, with fixed-price three-course dinners before each evening show and after Sunday matinees.

Resolution calling for study of Kentucky School for the Deaf withdrawn

A resolution that would have called for a study looking into the possibility of Danville Independent School District managing the... read more