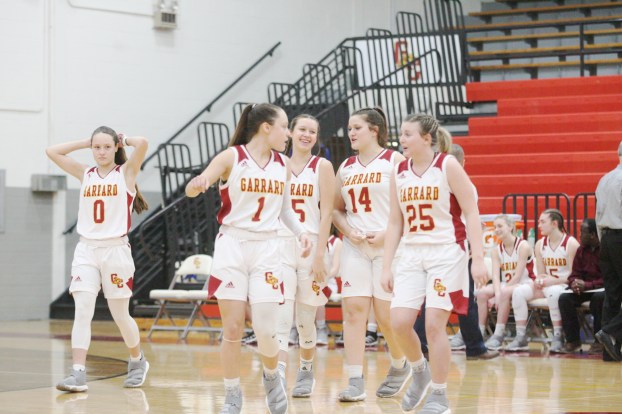 The Garrard County girls basketball team was at risk of losing on their senior night to Corbin on Monday.

Up by as much as 12 points, the Golden Lions saw that lead evaporate when the Redhounds changed defenses and took the lead early in the fourth quarter.

After being held to only two points through the first three periods, the senior exploded for 11 points in the fourth to lead Garrard to a 58-53 victory.

“That’s why they voted her captain unanimously,” Garrard coach Jimmie McCulley said. “She wants the ball in her hands late in the game and I do too because she can knock down free throws, she’s got a good head on her shoulders.

“She played a little too fast in the first half. We want to play fast, we do. In the half court we’ve got to slow it down and get some better shots. But I’ll take her over any point guard any day.”

McCulley said that he felt Gonzalez played unselfishly through the first three quarters — she had four assists — but in the final frame, he needed her to “take over” the game.

“I told her ‘They cannot guard you,’” he said. “She’s a little unselfish at times and was during the first half. Sometimes, I need her to be selfish and tonight was one of the nights. She stepped up big in the fourth quarter.”

The Redhounds came out of the half trailing 31-23, but outscored the Golden Lions by seven to cut the lead to one. The different defensive look, as well as just going cold from the field combined to sink Garrard’s lead.

“We went over it the last two days, but I guess until you see it live from someone else, you don’t realize what’s going on,” McCulley said. “We got a little tight when a couple of shots didn’t go in — we started pressing. But that change of defense really gave us problems. We weren’t getting to the spots we were supposed to against that defense. That’s how a 12 point lead goes to a four point deficit.”

But he never lost faith in his group.

“Like I’ve said from day one, this bunch is a group of fighters. I don’t care what the score is, they’ll fight til the end.”

“Carolina — if she’s not one of the best point guards in the region, I don’t know who is. She’s led this team from start to finish,” McCulley said. “She doesn’t say much but leads by example. That’s what I love about her. Nancy Gonzalez — I usually put her against the team’s second best player because she can get down and play defense. Late in the season, her shot hasn’t fallen like it was earlier but she’s really bought into our system and I’m glad she’s here on my team.

“Brittany, what can you say about her. I’ve been doing this 11 years and she’s the toughest player I’ve ever coached,” he continued. “She takes every challenge, every butt chewing. Even when it’s not her fault, I’ll jump on her and she goes out and plays. She’s going to be tough to replace next year because of that toughness. Madisyn’s grown a heck of a lot since I took over in May. All she’d been told to do was be a stand still shooter on the wing and when I took over I told her she’d need to play defense. She’s bought into playing defense, rebounding, taking it off the dribble. She’s become a complete player.

“Katy’s the enforcer on this team. She didn’t play a lot tonight because of matchups but I’m really glad she came back out. She’s a great teammate and wants every player on this team to do well. Everyone loves her to death because she roots for them. She could care less how many points she scores and how many rebounds she gets. She’s all about the team.”

McCulley said that it was crucial to have that group of seniors buy into his system in his first year with Garrard County.

“If the younger group sees the five seniors buy in, they jump on board,” he said. “I think the style we play is fun for them and that’s why it was a little easier to buy in. We like to go 100 miles an hour and you won’t ever hear me fuss at them for taking shots. If you sit down on the defensive end, I don’t care how many shots you get up. That’s why they like this style so much. We get it and go. It’s fun for them.”

McCulley said that the senior class he honored on Monday night was the “foundation” to building a program that will change the perception of Garrard County girls basketball.

“When I took this job, I had people ask why I wanted this job. They said I couldn’t win here. Well,I disagree,” he said. “Those five seniors have laid the foundation for this program to keep going and go further than they have before. They should be proud that they’ve built this program to be a legitimate threat in the 12th region.”

He knows next year’s team will be young — only two juniors are currently on the roster this year — and that his team might take a step back, but that’s not going to stop him from enjoying this team.

“Next year’s going to be a rebuilding year, but I’m going to have fun with this group until it ends.”

STANFORD – The Lincoln County boys got exactly what they needed Friday night. The Patriots needed a victory over Danville... read more