Question: Hi Jerry, I bought what I believe to be a rarity today — an inkwell with a jeweler’s mark and clock under the lid. Seems very unusual to me! I was drawn to this piece like a magnet and it kept bugging me to bid on it. I just read an article about the maker online, silversmith/jeweler whose work was equivalent to Tiffany & Co. and very rare. I want to look at that lid and see if it’s hallmarked now! 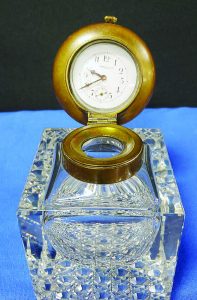 W.W. Wattles and Sons Pittsburgh (jewelers) clock marked France. What do you think it would be worth in the right hands? I love this piece, not sure if I’ll part with it or not. The auction company has already had people emailing about it. They wanted to know if a dealer bought it and where it would be sold. And, the clock runs and is keeping perfect time — another plus!

Answer: Wow! What a great piece. Today, people think that if you carry and use a fountain pen, you’re a certified Beau Brummel. Well, fountain pens are special in this iPhone world. But at the turn of the last century, it wasn’t just the pen, it was all the desktop accessories that went with it that signified you were a gentleman and man of letters. People just can’t imagine all the things that went with a properly equipped desk — letter openers, ink erasers, glue pots, stamp holders and of course, inkwells.

This one was extra special because it has a fine clock mounted in its lid.

This inkwell was assembled and crafted by W.W. Wattle in Pittsburgh, Pennsylvania. There was a time when America had ultrafine jewelers and workshops in every major city, like Marcus & Co. in New York, which merged with the famous jewelers, Black, Starr & Frost, in 1962. Black, Starr & Frost opened in 1810, decades before Tiffany & Company, and remains in business today. Many stores, like these small independent ones, maintained super high standards and quality for a long time. However, they didn’t have the multimillion-dollar advertising budgets that the likes of Tiffany & Cartier had. Therefore you don’t always hear of these incredible places.

William Wallace Wattle opened his first store in 1870 and passed away in 1912. Like many old guard stores, jewelry and department stores, they closed in the 1960s. I think that your cut glass and bronze inkwell dates to the early 1900s. I say bronze because I think that with a store like Wattles, this fitting would have had a gold wash on it at one time. I suspect that overzealous housekeepers have buffed it away, leaving a rich bronzy metal.

You said the clock was marked France. You might have a jeweler open it up to see if there is a maker’s stamp inside. Even fine jewelers, yes, Tiffany did it too, bought high end watches and had them branded with their names and sold them in their retail stores. The movements were fine, the price was right and it was better for the bottom line, to use a manufactured watch, opposed to creating one by hand.

All in all, this is a super inkwell, and it’s even better, as you said, that it’s in running condition.

I imagine that under bidders are inquiring about it, especially if it slipped through the cracks. This piece will appeal to those who collect inkwells, writing accessories, clocks and those who just like fine things. I think that in this condition at a fine antiques show it would be priced at about $400. It’s a super piece from another time. Thanks for a great question.