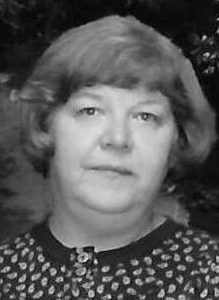 Elizabeth “Libby” Jane Mayes, 69, passed away Wednesday March 4, 2020. She was born in Danville on October 27, 1950, the daughter of the late Leslie McGee and Jane Wilmont Davis Mayes.

Libby worked for Hobart for many years and was a member of Perryville Christian Church where she was a nursery worker, Chairperson of the service committee, and following in her mother’s footsteps made the cornbread for the bean suppers at church. She enjoyed watching old western TV shows and loved all animals especially cats. Among the many pets she had over years, perhaps the best known was Malcolm, the spider monkey.

The funeral service will be 11:00 a.m., Monday March 9, 2020 at Perryville Christian Church with Pastor Joe Hood and Rev. Stephen Smythers officiating. Burial will follow in Hillcrest Cemetery. Visitation will be from 5 – 8:00 p.m., Sunday March 8, 2020 at the Christian Church.

Memorial contributions are suggested to the Gavin Whitehouse Education Fund or the Joni Wilder Scholarship.