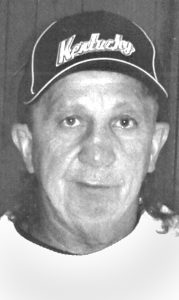 David Lee Chambers, 71, of Forkland Road, Parksville, died Thursday, March 5, 2020. Born January 15, 1949 in Danville he was the son of the late Irvine David and Lillian Elizabeth Bryant Chambers. David was a graduate of Burgin High School and was an Electrician for Corning Glass Works and Phillips Glass Co. for over 35 years.

David was an avid fan of UK Basketball and old cars. He loved doing anything around his house or with his family, whether it was mowing the yard, playing with his animals or camping with his family. He was a people person and let his family know he loved them more than his cars. He was predeceased by a sister, Lueanna McKenney and her husband Ted.

Memorial donations are suggested to the Danville-Boyle Co. Humane Society. The online guestbook is available at www.stithcares.com.