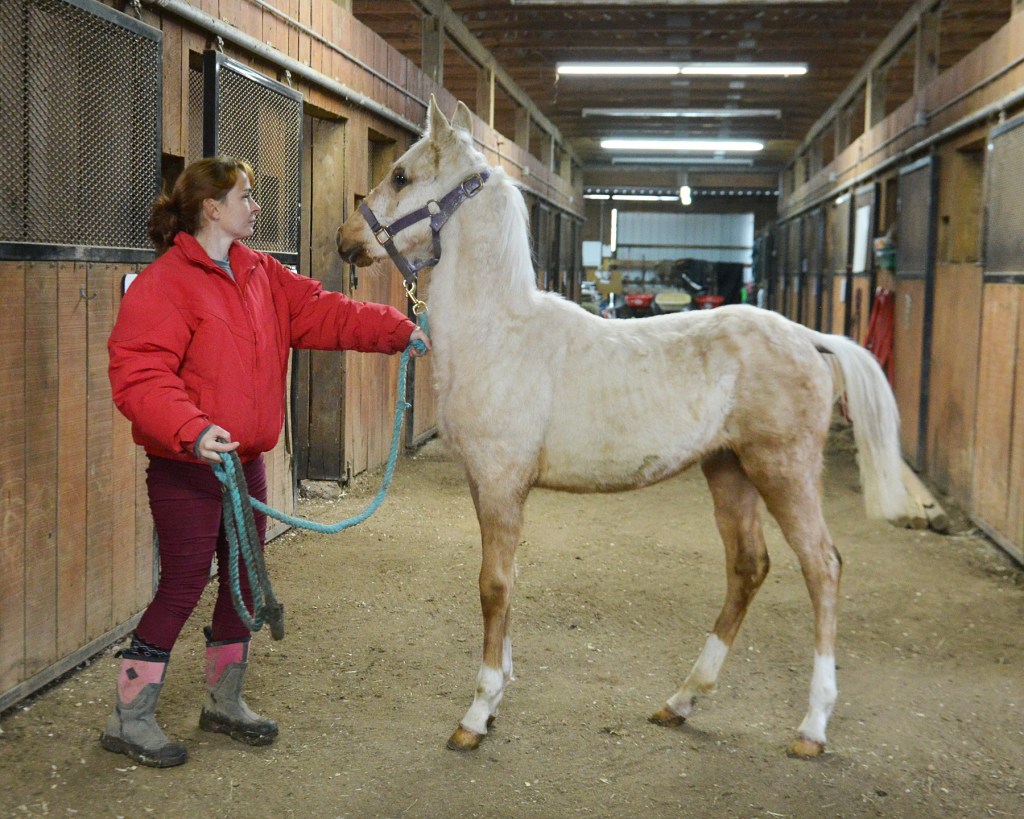 On a briskly cold Saturday morning, volunteer Jessica Deering goes from stall to stall in a freshly-cleaned barn on Harrodsburg Road in Boyle County. She moves hay around and checks on their water; and she talks to each horse, walking some out to check their legs and hooves. 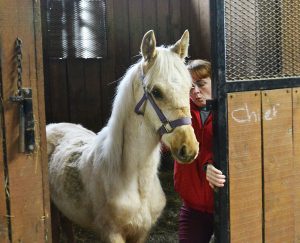 Honey walks up to the opening in her stall door with a lot of energy, whinnying a few times. She’s still incredibly thin, with some protruding bones and a sway back, but she’s getting there. Fizzy Ramsey, board president for the Danville-Boyle County Humane Society, reminds that she was the young one that couldn’t stand back up on her own at first, requiring two people behind to push her up.

The humane society has been the fiscal sponsor for this horse-rescue operation, which began on Valentine’s Day when an eviction notice was being served on the farm. As investigations continued, not one but two renters on the property were arrested and charged with multiple counts of animal cruelty due to neglected, starving horses found living in about a foot or more of manure-filled stalls; others were found dead in those stalls.

Both women were leasing barns and lots on the property, one with mostly saddlebreds she boarded and trained, the other with mostly mustangs obtained through the U.S. Department of the Interior’s Bureau of Land Management’s Wild Horse Program.

Both women are facing misdemeanor charges, because there is “not a felony for this, unfortunately,” says Boyle County Attorney Chris Herron; he says felony animal abuse charges in Kentucky only apply to dog-fighting. 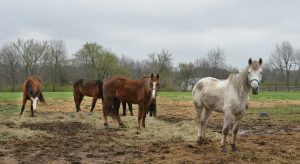 Ramsey has been more of a behind-the-scenes advocate, she says, and points to volunteers like Deering and John Turner, a humane society board member.

“… and Austin Rayborn, April Stark and ‘Papa’ Mike Cassidy to help facilitate the horses’ care. Without the outpouring of community support, near and far, this project would not have been feasible,” Ramsey said. “The list of volunteers, donors and supporters would exceed your word count …”

“They’re the ones on the front lines, getting these things done,” she said. “It has been an impressive display of interdisciplinary teamwork to get these horses the rehabilitation and justice they deserve.” She’s worked to write grants, organizing donors and other essential services relating to the horses’ wellbeing. 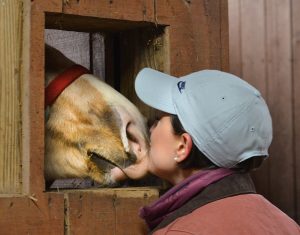 Ramsey said one of the women has signed over ownership of her horses to the county. That means as soon as the order is signed by a judge, those saddlebred horses will be up for adoption to people who qualify. An adoption form is available online that anyone can fill out and return.

“The second lady, Bayne-Donnell, signed an agreed order relinquishing the ownership of the horses over to animal control, and she will still be responsible for what we’ve paid out and so forth,” Herron said.

The agreement doesn’t relieve her of any liability for the charges against her, he specified. He thinks the order should be signed any day now.

Bayne-Donnell is also being charged with tampering with physical evidence, Herron said, because as Logue was being investigated, it’s alleged that Bayne-Donnell “moved several of her worst horses to a different location.” He said Boyle Deputy Casey McCoy is investigating it, and will present the additional charge directly to the grand jury.

The American Saddlebred Horse Association, out of Lexington, will also be assisting in helping pay veterinarians’ costs for any saddlebred, Herron said, at up to $125 per horse through a special Equine Fund.

Judge-Executive Howard Hunt, who was one of the first people on the scene after the horses were found, helping to facilitate delivery of hay to feed them, said he hopes restitution is sought from the two women.

“I hope that in … the negotiation with them, that they get to the cost incurred — restitution,” he said.

Hunt said he doesn’t have a good handle on exactly how much that restitution could be. “I know there’s some vet costs …”

Ramsey said so far, all the vets’ bills have been paid by donors to the cause. There’s been a dumpster and a portapotty provided by the county, and some inmates were brought out from the jail to help shovel out stalls. Everything else has been on a volunteer basis, including volunteers’ time for caretaking and cleaning, fuel for tractors and other costs, she said.

Ramsey said she commends the county for taking on a case of this magnitude and allowing knowledgeable volunteers to be at the helm of the caretaking.

“I hope the restitution can be used to pay back the fiscal sponsor of this project, so the money can go towards future use if there’s a situation with equine or other large animals,” Ramsey said.

The humane society has a horse/large animal fund for precisely those issues, “so in the future, if we have to do something to pay someone to give us hay and feed, things like that.”

The money has all been donated to pay the vet costs, she said, because organizers figured the county wouldn’t be able to pay any costs until after the court cases were through.

Deering, who raises and sells mules for a living, has worked on rescue cases of this magnitude before. She used to do a lot more with rescue work, but there’s “a lot of politics involved, so I started helping out and fostering for rescues” instead, she said. “Some take up to two, three years …” and every case is different.

Hopefully now that one of the owners has signed her horses over, they can be adopted out and get one-on-one attention to continue their rehabilitation, she said.

They have about two months’ worth of resources left in order to feed and take care of the horses, Ramsey and Deering both figure. Which is why getting them adopted out in a timely manner is so important.

They say the community has been amazing, with businesses and individuals coming together to help with donations of feed, monetary donations and other services. But that will be slowing down, they assume, in the current health scare with COVID-19.

“For me, personally, I can’t ask Americans who are losing their jobs to give money to horses. We’ve slowed down a bit with the asks; someone who doesn’t know how they’re going to feed their family next month isn’t in the place to help,” Deering said.

She’s more concerned about getting people to fill out the adoption forms who are interested. Even if the order is late getting signed for whatever reason, Deering and Ramsey say at least they can begin to start vetting some of the applicants.

Deering said the horses need a lot of extensive care. “It’s more time-consuming than owning a regular horse, because the shape they’re in. It will take six months to a year to get them back to where they should be — nutrition-wise, muscle-wise, socially, the blood work … They were really really anemic and eating into their own muscle, so it will take them a while to get back to where their bodies are properly functioning.” A farrier has already come in who did all of the mustangs hooves, as well as some of the saddlebreds.

“Their tendons are starting to get stronger; they’re doing well,” Deering said.

Ramsey said on a grander scheme, this case is all about public awareness, and seeing the big picture.

“Yeah, so dogs and cats have felonies attached” to certain cruelty charges, “but there are no felonies associated with horses for mistreatment and neglect,” she said.

There’s a lot of money in the equine industry in this state, they say, and a lot of lobbyists who don’t want those laws on the books.

“It’s a tough state to advocate for it,” Ramsey said, adding it seems so ironic. “This is horse country — I mean, come on.”

Kentucky’s state animal protection laws are known to be weaker than comparable laws in many other parts of the country. A report by the Animal Defense Fund ranked Kentucky as the worst state for animal protection.