A walk for the kids 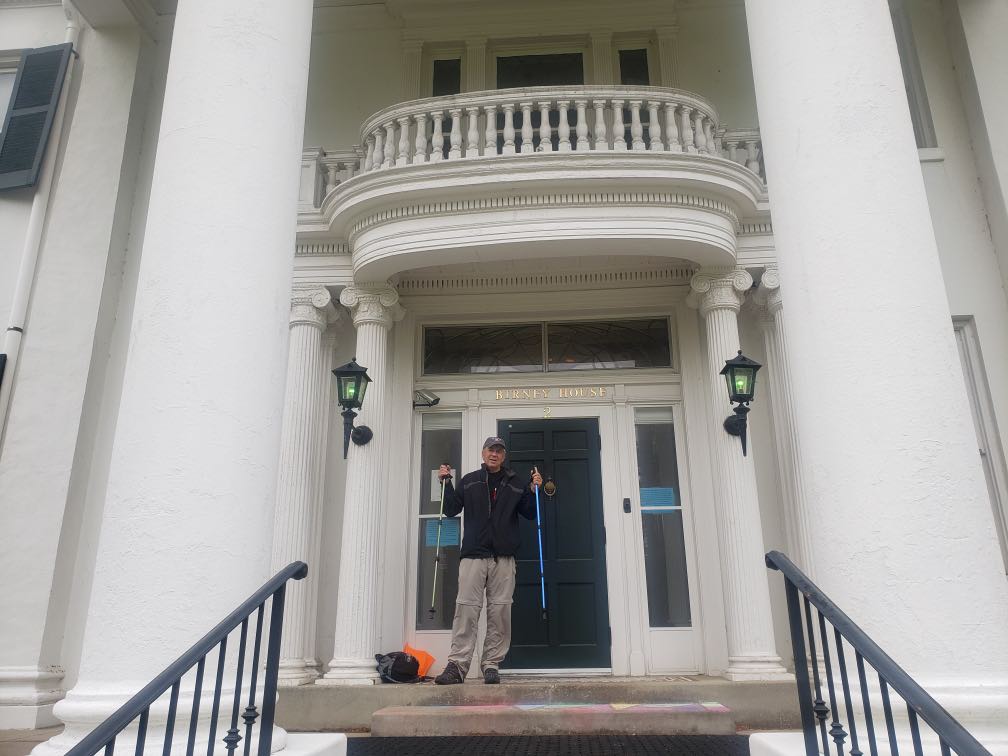 Rick Burslem says while there’s a health care crisis going on across the country due to COVID-19, he doesn’t want the public to forget about the ongoing crisis that affects children every day. And as VP of marketing and advancement for Sunrise Children’s Services, Burslem has set out on foot to walk what will be a total of 153 miles across the state, while documenting his trek, in order to bring awareness to an ongoing problem.

Sunrise is a nonprofit organization created in 1869, which is now licensed as a behavioral health services organization, providing foster care, residential therapeutic treatment and community-based services across the state.

“This is an epidemic, as well,” Burslem said Monday, as he took shelter from the wind as well as some snowflakes, to talk over the phone on the side of the road near a high school in Danville.

“I recognize borrowing that word, ‘epidemic,’ in co-association with COVID, but when we talk about the numbers — 10,000 kids in our home care in Kentucky, 500,000 kids in the U.S. alone in out-of-home-care — when we think about that, those are hard numbers to wrap your head around.”

He said to give the public an idea, that means one child in Kentucky every single minute gets pulled from their home, and one child every 50 seconds nationally is abused.

“That contextualizes the extreme need on the forefront of helping families become whole, so that kids don’t then become the victims of all the tragic things that are happening within the home. They’re the recipients of all of that trauma, and it’s hard for kids to deal with that.”

So, he’s also asking that those who can will donate to Sunrise’s efforts to continue helping those children.

Sunrise gets reimbursements from the state, “but we’re still dependent to raise about 20% of the gap between reimbursement that covers what we do and the care of the kids.” He says the gap completes the organization’s obligation to keep its lights on and the staff paid.

“We’re struggling, but we are continuing just to get the word out,” he said, and that the Kentucky Baptist organization, which Sunrise is affiliated with, has been “very helpful.”

But, they’re anticipating if funding is low now, that will continue to create a deficit in the future. “We’re trying to be proactive to attempt to bring awareness that we’re still here, and we still need those funds. These kids are important.”

Burslem said before he came to work for Sunrise, which was about two and a half years ago, he never understood that this population of kids even existed. He’s been in education for the last 37 years as a teacher, technology director and administrator. He had served as headmaster of various Christian schools, leading their missions through fundraising.

“I always thought that orphan care — you adopt kids from overseas. But when I became associated with this organization, you can’t help but not be affected with the need that these kids need to be loved and cared for by safe adults, and that’s what Sunrise does.”

He says Sunrise has these kids who are “unfortunately caught in the vortex of incredible poverty, impoverished thinking, dangerous and, just, well, how do I put it, more of a lifestyle of people who act out … and the kids are a result of their poor actions.”

He began his trek at the Cumberland Adventure Program, a Sunrise location outside of Somerset, on Thursday, April 2. “I did it for two days, then realized that these feet weren’t necessarily made for walking …” Burslem said, yet he walked 20 miles over those two days.

His wife will pick him up wherever he makes it to each Friday, so he can rest for the weekend.

“It’s really not this grand and glorious — I have a backpack, yes, but I’m not truly ‘camping.’ I do get dropped off in the morning, and then picked up in the late afternoon by my wife.”

It took him from last Monday through Thursday to get into Danville, then he took Friday-Sunday off. “I had coffee with my favorite place, The Hub … And this isn’t about me, it’s a celebration for the staff and what they do, as well as an awareness about the kids we care for.”

And Burslem said the staff has been priceless.

“I want to mention the heart and compassion (Sunrise President) Dale Suttles has for the organization. He’s a real inspiration, and the type of guy you want to do anything for.” Burslem says what Suttles shows for the kids is inspirational, and that continually affects the rest of the staff.

He points out that Kentucky is on the top of three national ranking lists, which directly relates to the importance of what Sunrise does. “The state ranks No. 1 as the worst state for child abuse; No. 2 for the highest rate of incarcerated parents; and No. 3 at the highest death for overdoses in the nation,” he said.

Monday, he was hoping to make it to Perryville. Then after that, he’ll head to Mt. Washington, where they have a facility.

“This leg of the trek is about 70-plus miles.” Which hasn’t been all easy.

Burslem said before he began his adventure, he really wasn’t in the best shape due to a back problem. “But I feel a lot better, now. I can do this. I call it a walk for the kids. For me, it’s all about them.”

He says the reaction to his walk has been very positive. “The constituents we’ve had follow me, in our media approach … lots of new people have been coming to the cause from all over the place, from California to Florida,” he said. “And I have to give a shout-out to my son.”

Burslem’s son, who lives in Florida, held a birthday fundraiser for Sunrise, which brought in $2,000. “My whole family is also behind this, it’s been really neat.”

Burslem expects to end his trek around April 24-25, at Sunrise’s Glendale location, which is a women’s facility.

Has it been easy? Burslem said no, definitely not, but to raise awareness — it’s the least he can do; he just keeps the kids in his mind when he gets tired.

To donate to Sunrise Children’s Services, visit www.sunrise.org/walk, or its Facebook page.