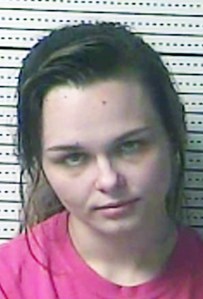 A Campbellsville woman was arrested three times in as many days by Danville Police on a variety of charges.

Sydney Bubnick, 24, was arrested first on Saturday, May 9 when officers were called to Ephraim McDowell Regional Medical Center parking lot for a female who was causing a disturbance.

She was determined to be under the influence of intoxicants and admitted to recently using methamphetamine, and was then arrested and charged with public intoxication. Bubnick was released from jail at 9:13 a.m. on Sunday.

Later that morning, police officers responded to Bonnie Court to check on the welfare of a female in the area. Officers encountered Bubnick who then began causing a disturbance and was found to be in possession of stolen junk mail.

She was again taken into custody at 11:21 a.m. and was taken to jail on charges of second-degree disorderly conduct and resisting arrest.

Monday. At 11 a.m., an officer was dispatched to the Boyle County Recycling Center due to an employee who reported his vehicle had been stolen. The investigation led officers to a residence on Worldstown Road where the vehicle was found and Bubnick was determined to have been the driver.

Bubnick was arrested at 1:45 p.m. and was taken back to jail on the charge of receiving stolen property valued less than $10,000.