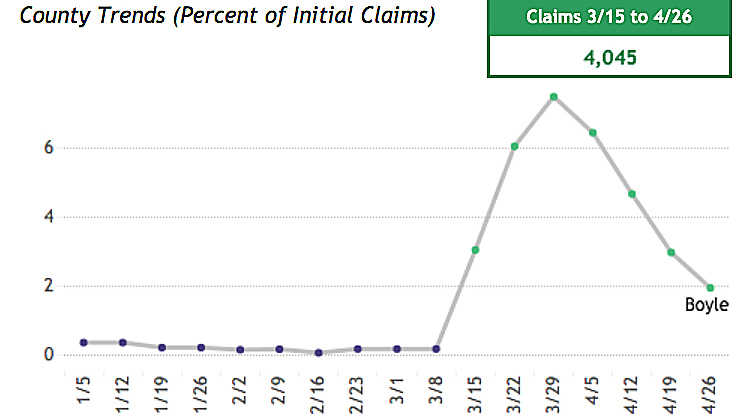 The COVID-19 pandemic brought on a surge of unemployment statewide, and a report from the Kentucky Center for Statistics, shows that the pandemic has resulted in more than 4,000 Boyle County residents filing initial unemployment claims, equating to nearly 32.5 percent of Boyle County’s civilian workforce.

Since then, many have returned to work as Kentucky Gov. Andy Beshear instituted the “Healthy at Work” initiative and several businesses began reopening as early as May 11 with a gradual reopening of the economy continuing over the next several weeks.

While nearly every sector of the workforce has been affected by the pandemic, either by businesses being closed down or forced to change the way they operate, some industries have been hit harder than others.

Jody Lassiter, president/CEO of Develop Danville, said the EDP has been monitoring the impacts of COVID-19 locally, specifically in the industrial sector which employs many Boyle County residents.

Lassiter said the EDP has surveyed local employers and learned that nine local industries did not lay off any employees and remained open over the last several weeks as they were deemed essential.

While 12 local industries did lay off employees, Lassiter said those companies plan on bringing back those employees in phases from May 11 – June 1. Many of those employees returned to work on Monday of this week.

“According to the responses collected as of this morning (Monday), there were only 58 full-time employees reported as being impacted by permanent layoffs,” Lassiter said.

During that time period, more than 523,000 Kentuckians filed an initial unemployment claim. Manufacturing, healthcare and social assistance, and accommodation and food service were the three industries most heavily affected by the pandemic at the state level also.