From the farm to the Capitol: Lincoln County’s Mike Broihier makes bid for U.S. Senate 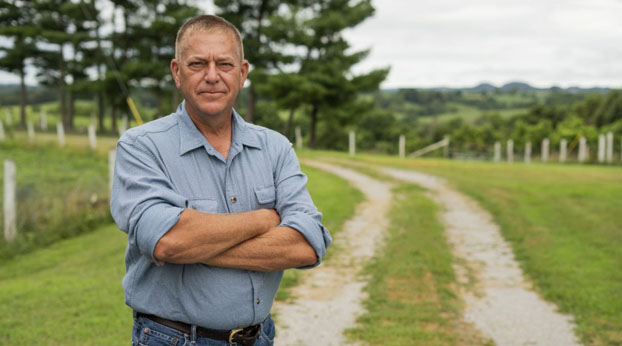 Mike Broihier’s resume is extensive. He comes from a military family and spent 21 years in the U.S. Marine Corps., serving in Japan, Korea, Somalia, and Afghanistan, among others. He and his wife, Lynn, operate a farm in rural Lincoln County. Broihier formerly served as the editor of The Interior Journal and has experience in public school classrooms, serving as a substitute teacher.

What’s next for the 57-year-old Broihier? A bid for the U.S. Senate with two goals in mind: defeating Mitch McConnell and serving the people of Kentucky.

“I’ve never had a desire to run for office before,” Broihier said. “I feel like my life experiences put me in a unique position to go after Mitch McConnell and I see that as my mission. I don’t scare easily, but what I see happening in Washington, I think that we are teetering on a slide into authoritarianism and it’s being enabled by Mitch McConnell. My decision was truly about defeating McConnell and serving the people of Kentucky.”

Broihier has lived all over the U.S. and internationally, growing up in a military family and serving as a Marine himself. When he and his wife, a retired Marine also, decided to settle down, they wanted to begin farming.

“The first place that I ever chose to live was Kentucky,” Broihier said. “Before that, it was my parents or the Marine Corps telling me where to go, so when we finally got to pick where we wanted to live, we picked Kentucky.”

How did Mike and Lynn find their way to Lincoln County? Extensive online research kept pointing them in that direction.

“We met while in the Marines and we decided we wanted to be farmers,” Broihier said. “So we set off on this nationwide search for a farm on the internet. Everything we wanted was in Kentucky with the land, the opportunity, and the people. Specifically, Lincoln, Adair, and Casey counties kept coming up. It was really weird, almost like it was fate.”

They each took a 10-day leave from the Marine Corps. By day three, the couple owned a farm in Lincoln County.

The two have called Lincoln County home for the last 15 years, and during that time, they’ve operated their farm, and Mike spent five years working at The Interior Journal and also served in local classrooms as a substitute teacher. These experiences of interacting daily with working class Kentuckians provides an insight that many in Washington do not have, he said.

“Working as a journalist led me to really understand kitchen table issues,” Broihier said. “You can go to the local meetings and see what people are really interested in.”

Broihier said he has seen those issues first-hand, watching students leave school on a Friday with a backpack full of food because they didn’t have access to food at home.

He said Jobs, healthcare, and the environment are three of the most important issues facing Kentuckians. The COVID-19 pandemic has shown just how important these issues are, he said, particularly with employment and healthcare.

“You have a system of healthcare that’s largely tied to employment, and then you put 36 million people on unemployment across the country,” Broihier said. “There’s a problem there, and it really exposes how fragile that system is.”

As for the jobs issue, he said he wants to put an emphasis on infrastructure and partner with other Appalachian states like West Virginia and Tennessee to advocate in Washington D.C. for the region. If the infrastructure is in place, Broihier said, then industry will follow close behind.

Those issues that Broihier is passionate about have led him to be an advocate for Universal Basic Income (UBI), a policy idea that began to gain notoriety with the presidential campaign of Andrew Yang this year. Yang, an entrepreneur and attorney from New York, endorsed Broihier’s Senate campaign last week.

“I’m working with a world-renowned expert on Universal Basic Income that is helping me craft my plan on how to do it and how to pay for it,” Broihier said.

UBI isn’t a silver bullet to solve all the problems, Broihier said, but it makes reaching the solution easier and provides more options and opportunities for working individuals. It also assists people who have to work two or three jobs just to make ends meet.

“With UBI, if you like your job even though it doesn’t have great pay, it gives you insulation to stay in that job,” Broihier said. “It gives you the power to say yes to a job you love and no to a job you hate… UBI values all work. There is so much work in Kentucky that is uncompensated.”

Broihier knows that there are some who would oppose such a policy, but he hopes that they will take some time to consider the idea.

“So these people, they have no problem giving money to corporations, right?” Broihier said. “So here is the fundamental difference. My belief is that money is better spent in the hands of the people. I believe that money invested locally generates incredible velocity. The middle class, working class, working poor, they spend nearly every penny they get. If you want to see a local economy roar, put money in the hands of the people. If you give $50 billion to the airline industry, they spend $45 billion buying back their own stock and you and I paid for that. Now you have a handful of really rich people getting much, much richer.”

Broihier puts it simply to say that if the government is going to inject money into the economy, it is best served by putting it into the hands of people.

“Just look at how money changes when someone who works two or three jobs gets paid,” Broihier said. “They spend it. They pay their rent, they fix their car, they get their kids ready for school, whatever it is. You give the money to a corporation, and a very small number, a handful of people, just get richer. To put it simply, how would your life be changed if you got another $1,200 per month?”

In a crowded field of Democratic primary candidates, Broihier said his authenticity is a trait that sets him apart.

“I’ll answer any question,” Broihier said. “I’m not trying to pad my resume. I’m not running for some other job in some future administration. I’m running to beat Mitch McConnell. This is really a one-shot deal. I don’t have plans beyond this. It’s just best for me to run as who I am.”

When asked why voters should choose him, Broihier said he feels like he is the candidate best suited to defeat McConnell and change the path of Kentucky.

“You don’t have to accept the chosen candidate of the Washington D.C. Democrats in this primary,” Broihier said. “People should vote for me because Mitch McConnell poses an existential threat to the future of this republic and I’m the person of all the candidates who can beat him.”

The Kentucky Primary Election is scheduled for June 23.