‘You can’t fight violence with violence,’ says mother of victim 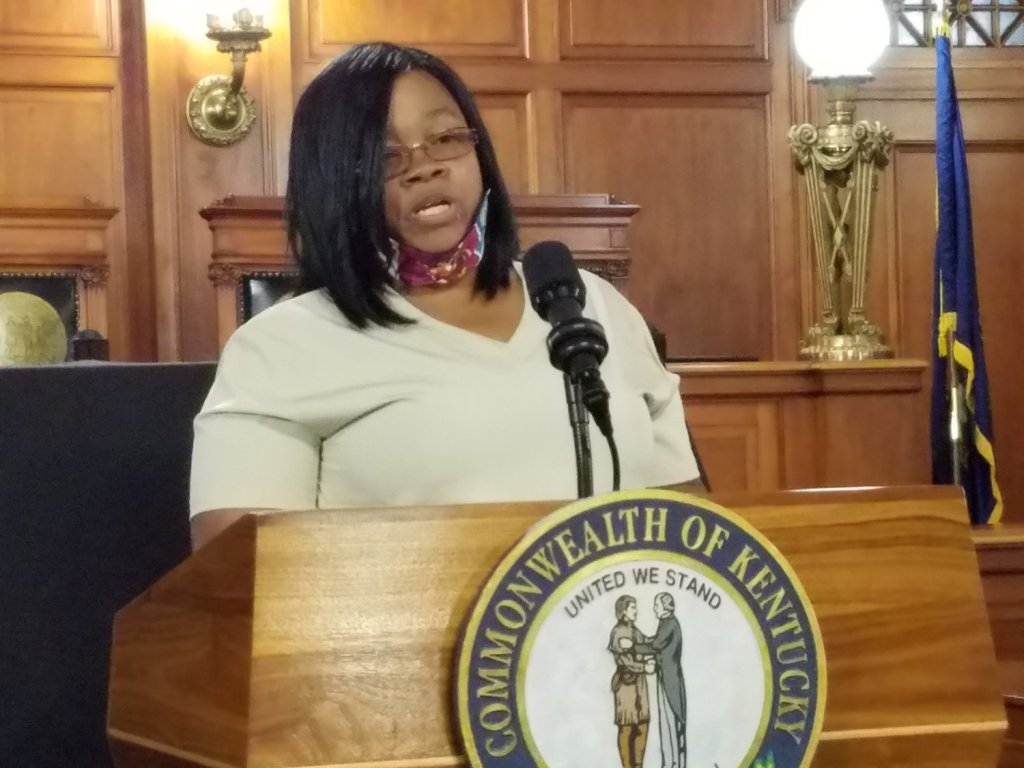 Tamika Palmer, the mother of Breonna Taylor who was shot to death at her home in March by police, talks about her daughter and the violent protests in Louisville. (Kentucky Today/Tom Latek)

Gov. Andy Beshear held a press conference on Monday to discuss the violence in the city of Louisville these past few days in the wake of the fatal shooting of Breonna Taylor, a black EMT worker who was shot to death at her home in March by police.

The protests followed the release of a 911 call Taylor’s boyfriend made on March 13, moments after the 26-year-old was shot eight times by narcotics detectives who knocked down her front door. No drugs were found in the home.

Seven people were shot during protests Thursday night, reportedly after what have been referred to as outside agitators came in several hours after a peaceful protest began. Officers from the Louisville Metro Police Department are not thought to be responsible for the shootings.

Then, early Monday morning, a man was shot to death by Louisville police and Kentucky National Guard soldiers who were called there to break up a large group of people who had gathered outside a West Louisville store, in defiance of Mayor Greg Fischer’s 9 p.m. to 6:30 a.m. curfew. A man reportedly fired at the police and soldiers, and they returned fire. It is not certain if the man killed was responsible for firing the shots that triggered the response.

“Today, we continue to hurt for the city of Louisville, the commonwealth of Kentucky and the family of Breonna Taylor,” Beshear said during the press conference, which was held in the Kentucky Supreme Court chambers.

Tamika Palmer, Breonna Taylor’s mother, spoke at the press conference, saying all she wants is justice for Breonna, that those officers be fired and that people know the truth about her daughter’s death.

Beshear says he is still learning details of the early Monday morning shooting.

“I was called this morning around 3:40 and was informed on the initial report of the incident involving both the LMPD and the National Guard,” the governor said. “I’ve been in the office since 4:15 this morning, reaching out to different groups involved and calling for the Kentucky State Police to be involved with either an independent investigation or direct oversight of the investigation.”

Beshear said he understands there is video available of the incident from bodycams and other sources. ”I have called the mayor of Louisville and through our law enforcement groups have contacted the LMPD, and asked them to release it as soon as possible.”

He said he hopes to have it before the end of the day.

“I believe the people of Kentucky deserve to see it for themselves,” Beshear said. “And I believe in seeing it can decide whether this was justified, or whether it is cause for more concern. While I have been given the basic facts, I want the people of Kentucky to decide for themselves, and not have to rely on anybody else at this time, knowing the feelings that are out there.”

Beshear contrasted Louisville’s protests with those in Lexington, where police knelt in prayer with protesters. “Very different in tone and in tenor. There has been more of a coming together certainly in Lexington. I’d say it’s been uplifting to see people still be able to express their frustrations in a peaceful manner, and with a [police] response that is in line with that.”

He also condemned what he termed “outside agitators” in Louisville.

“What we’ve seen in some of the video is professional vandals,” Beshear said. “You see them in full tactical gear walking down the street just smashing with a hammer every window. Not trying to make a point, not even trying to take anything. Just trying to create or incite violence, trying to turn, I believe, everybody against each other.”

He says that’s the reason he called out the National Guard. “My concern was that we were reaching a boiling point where peaceful folks who were demonstrating got pushed in the wrong direction by those who want to cause violence and could cause real harm. Those who cause violence disappear right before the violence happens, and other people pay for it. I don’t want anyone hurt in all of this.”

Players were motivated to play for Sutton