State school-bus guidance no longer includes social distancing; compliance with plan for masks is expected to be a battle 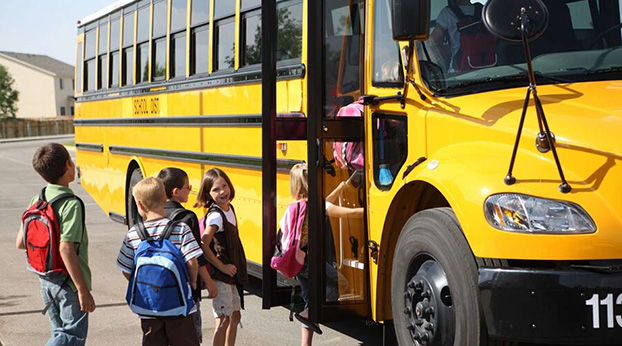 The initial public-health guidance called for keeping students and staff six feet away from each other, even on buses, with guidance from the Centers for Disease Control and Prevention calling for one student to a seat, with a seat between them.

That’s unrealistic, school superintendents said. Oldham County Supt. Greg Schultz told the legislature’s Interim Joint Committee on Education June 2, “There is just no way that most schools districts will be able to get their students to school in a timely fashion or in a cost-effective fashion.”

The same day, the immunization manager for the state Department for Public Health told superintendents it was changing its plan. Emily Messerli said, “In the classroom, we can’t have students being on top of each other because they’re in the classroom for seven to eight hours. The bus ride is less time, so there is less exposure.”

Messerli said families will be expected to provide masks for students, and bus drivers and monitors should have masks for those without one. Guidelines regarding masks and social distancing in school school buildings will still be required, she said.

That may be a challenge. Interim Education Commissioner Kevin Brown said at the online meeting that superintendents say families in some communities will not encourage children to wear masks to school.

Fleming County Supt. Brian Creasman told the Herald-Leader, “The majority of our students will not wear a mask, because the majority of their parents refuse to wear masks,” and that leaders who don’t know the pulse of their community are destined to fail.

He added later, “School districts across Kentucky and the nation can have the best plans for operation and teaching and learning, but if we overlook the glaring issue of support of masks and social distancing, we are doomed before we even leave the gate,” Creasman said.

Gov. Andy Beshear said June 2 that schools that embrace the suggested public-health guidance will likely operate without interruption, but those that don’t could face a shutdown.

He said state officials are still working on guidance for schools and will be influenced by what happens with the virus over the next two months. On June 8, the state Department of Education issued more guidance, titled “Covid-19 Considerations for Reopening Schools: Alternative Learning Design Strategies.”

The public-health officials said in response to a question that they would consider using Plexiglas as a barrier between students in classrooms, but said it would have to be cleaned between classes. They also discussed options for allowing students to eat in lunchrooms, with enhanced sanitation between groups and assigned seating, to allow for contact tracing.

Meanwhile, districts are sending surveys about covid-19 to parents and staff to gauge their concerns and preferences regarding schools reopening in the fall.

State Sen. Max Wise, R-Campbellsville, chairman of the Senate Education Committee, told Honeycutt June 5 that he had sent Beshear a letter saying he would like to convene an advisory council for the reopening of schools, including top education, health officials and Lt. Gov. Jacqueline Coleman, Beshear’s secretary of education and workforce.

Kentucky High School Athletic Association Commissioner Julian Tackett said at the virtual meeting that from June 1 through June 14, high-school coaches will be allowed to meet with their players in groups of no more than 10 if local school boards and local health officials agree, the Herald-Leader reports.

Beyonce asks Cameron to press charges against officers in…