Another day in long and winding unemployment line for many 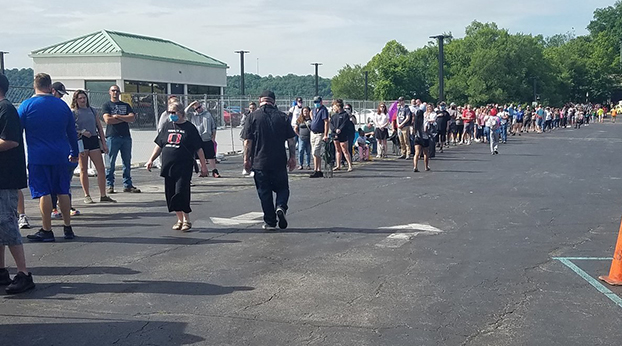 People with unresolved unemployment issues went in a line for hours at the State Capitol campus on Wednesday. (Kentucky Today/Tom Latek)

For the second day in a row, hundreds of people who have unresolved issues with their unemployment stood in line for hours at the state Capitol campus Wednesday in the hopes of having their claims adjudicated.

One of them who drove the furthest was Lakin Workman from Flatwoods, who says she drove nearly 2 ½ hours to the Capitol Education Center, where she stood outside in line for about three hours to get served.

“I follow a Facebook group and found out this was happening through them,” she said, and left early thinking there would be a lot of people showing up. “I got my kids up at four at said, ‘Let’s go.’”

She explained her circumstances. “I’m a cosmetologist and on March 18 we were shut down, so I filed that day. I got two payments, but I wasn’t able to claim in April because there was no benefits request section. So, I tried another way and was told ‘No because you have another claim.’”

“It’s been very stressful, and I can’t get ahold of anyone. It says Tier 3 and they’re going to call you back, and they just don’t.”

As her spot in line neared the CEC building, Workman said it was worth it. “I have my sunblock, I have everything, I am ready!”

The end of the line, which stretched around the Capitol Annex, was cut off shortly after Kentucky Today spoke with Workman, and there is no official word yet on whether adjudicators will be back for a third day at the Capitol Education Center on Thursday, nor if they will take their program on the road to other parts of the state.