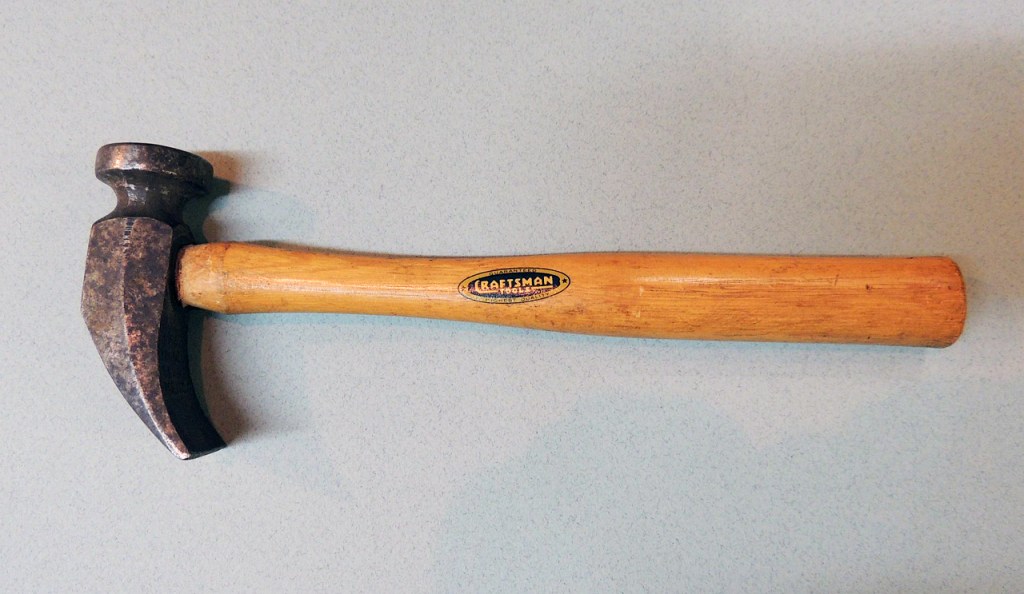 Question: Hi Jerry, what can you tell me about this hammer that was my father’s? He was a woodworker but this hammer looks like it’s new. It’s marked Craftsman on a decal on the side. I guess that it dates to the 1960s. I know that people collect old tools but would this hammer have any value? Thanks for reading this.

Answer: What a cool piece. I don’t think that he used it much, as the label is still, so fresh. But,

there is a reason that he didn’t use it much, because it’s a cobbler’s hammer. That’s right, cobbler, as in a shoe maker.

So, that would make sense that he didn’t use it too much.

This hammer is a Craftsman hammer. Craftsman is a line of tools and garden equipment. At one time, it was established by Sears, but now, it’s a brand that is owned by Stanley Black & Decker. Don’t misunderstand, Sears didn’t make these tools, they contracted with several other companies to produce these wares.

Craftsman was first sold by Sears in 1927 through their catalogs and in the brick and mortar retail locations. When in the Sears – Kmart merger happened in the 1980s, Craftsman tools were then sold in Kmart stores and other hardware stores.

This has been reduced to up to 25 years with a sales receipt. Many consumers complain of the lack of replacing tools through the company today. And more than one person argues

over the lack of quality. Sears came under fire with several lawsuits in 2004 when it was discovered that their “Made in USA” branding was in fact, made in China.

You don’t have to worry about that. Your cobbler’s hammer dates to the 1950s. It’s the condition and the fresh label that makes this hammer appeal to today’s collector. I found several listings online for about $25 for this specialized hammer.

So yes it does have value. Hope this helps you out. Thanks for sharing it with us.