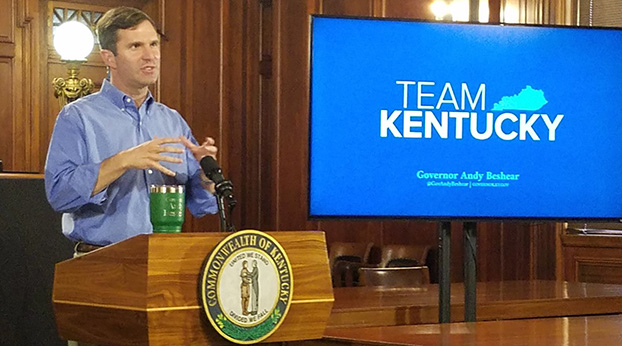 Gov. Andy Beshear on Sunday announced the largest single-day total of new COVID-19 cases in the commonwealth and warned that Kentuckians could face dire days ahead without renewed efforts by everyone to rein in the virus’ spread.
“We have got to defeat this virus. We are at war and we are in the trenches,” said Gov. Beshear. “I have faith and I have trust in the people of Kentucky. But today and in the days ahead we’ve got to do a whole lot better. We’re going to have to take some more action.”
Case Information As of 4 p.m. July 19, Gov. Beshear said there were at least 23,161 coronavirus cases in Kentucky, 979 of which were newly reported Sunday. Thirty cases were from children five-years-old or younger.
“We typically have limited reporting on Sunday which makes today’s record-setting number of positives particularly alarming,” said Dr. Steven Stack, commissioner of the Department for Public Health. “In the interest of accuracy, we are going to reach out and confirm results with some of the major labs. Even so, this surge in positive cases is a shocking wake-up call. Kentucky has flattened the curve before and it must act immediately and decisively to flatten it again. Please, wear your mask and socially distance.”
“This ought to be a wake-up call for everybody. This is a rough day for the commonwealth,” said Gov. Beshear. “Thirty children under five who have tested positive. Thirty families whose parents and caregivers are hurting more than anything we can imagine.”
Unfortunately, Gov. Beshear reported three new deaths Sunday, raising the total to 670 Kentuckians lost to the virus.
The deaths reported Sunday include a 67-year-old woman from Clark County; a 74-year-old woman from Jefferson County; and a 58-year-old man from Oldham County.
“Today we’ve lost three individuals, all far too young,” said Gov. Beshear.
For additional information, including up-to-date lists of positive cases and deaths, as well as breakdowns of coronavirus infections by county, race and ethnicity, click here.
Kentucky Supreme Court Keeps Executive Orders Protecting Kentuckians in Place Gov. Beshear announced Friday that the Kentucky Supreme Court has kept in place all executive orders related to the fight against COVID-19, including the order mandating the wearing of face coverings in many instances, until the court can hear full arguments from the Beshear administration and the attorney general’s office and issue a final ruling. Given the large increases in cases today, the Supreme Court order is even more critical in giving the Governor the authority he needs to protect Kentuckians.
A Boone Circuit Court judge was expected to sign an injunction nullifying many of the Governor’s executive orders on COVID-19. The attorney general challenged the orders Gov. Beshear put in place to protect Kentucky lives, to keep Kentucky from losing more than $10 billion in the economy and to help schools safely reopen this fall.
In an order issued Friday afternoon by unanimous decision, the Supreme Court stated, “Given the need for a clear and consistent statewide public health policy and recognizing that the Kentucky legislature has expressly given the Governor broad executive powers in a public health emergency, the court orders a stay of all orders of injunctive relief until such time as the various orders are properly before the court with a full record of any evidence and pleadings considered by the lower courts.”
Retailers Require Masks, Support Statewide Face Coverings Mandate The Governor is highlighting the many national retailers and small businesses that are now requiring customers to wear masks while shopping to protect the health and safety of all customers and staff members.
Kroger, an invaluable partner in the commonwealth’s testing efforts, announced its decision Wednesday.
Local elected officials like Harlan County Judge-Executive Dan Mosley have also shared their support.
“Masks disappeared like melted snow prior to this week. I’ve been encouraged to see near 100% compliance since Gov. Beshear implemented what was needed to protect our people,” Judge-Executive Mosley said.
Safety Reporting Hotline Gov. Beshear reminded Kentuckians that the COVID-19 reporting hotline is available to help keep everyone safe.
People who witness dangerous non-compliance with coronavirus mandates, including requirements for mask wearing, social distancing and sanitation, at Kentucky businesses are encouraged to call the COVID-19 reporting hotline at 833-KY SAFER (833-597-2337). Labor Cabinet personnel will monitor the line from 8 a.m. to 6 p.m. Monday through Friday. To file a complaint online, click here.
Testing Update Responding to some reports that some seeking coronavirus testing still are being asked to provide a doctor’s order, administration officials reiterated Thursday that the Cabinet for Health and Family Services, Department for Public Health (DPH) issued an order removing any such requirement to receive a COVID-19 test.
Kentuckians can sign up for molecular diagnostic testing at more than 200 locations throughout the state, listed by county at kycovid19.ky.gov.
More Information Read about other key updates, actions and information from Gov. Beshear and his administration at governor.ky.gov, kycovid19.ky.gov and the Governor’s official social media accounts Facebook, Twitter and YouTube.
Kentuckians can also access translated COVID-19 information and daily summaries of the Governor’s news conference at tinyurl.com/kygovespanol (Spanish) and tinyurl.com/kygovtranslations (more than 20 additional languages).