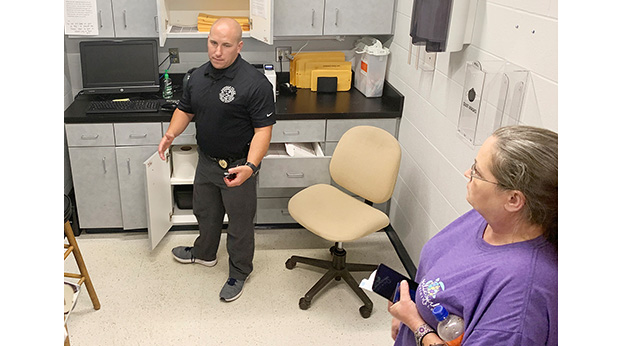 A group of 21 people gathered at the Danville Police Department Tuesday evening. Everything from general curiosity about how things are done by the department to some who had work-related interest brought the group together, and they make up the class of the 2020 Danville Police Citizens Academy. I’m proud to say, I’m one of those 21 people.

When the department put out the word it was seeking participants for the class, as a new Danville resident, I knew I wanted to take part. My work in journalism over the past 25 years has included a lot of interaction with police departments in different communities and different states, and as someone now working and living in the community, learning about Danville’s police department was something I wanted, and felt I needed to do.

After the members of the class introduced themselves, Chief Tony Gray and Assistant Chief Glenn Doan gave an overview of what the 10-week program would include. They provided some basic information, as well as fielding questions from the participants.

“That’s stellar for a department our size,” he added.

The hiring process was explained, and Doan said it can take from six months to a year from the time a person files their application until they begin the police academy. Gray added that the process is not a cheap one. He explained that the city of Danville has a $14 million operational budget for the year, and of that, $4.3 million goes toward operation of the police department. The cost of one officer can be as much as $160,000 to $170,000 when all expenses are calculated, according to Gray, which he said includes a vehicle that costs around $20,000, followed by another $25,000 to equip the car with what it needs. He said the in-car camera system costs $5,000, and that doesn’t include other accessories such as lights, radios and more. There are also costs for the body cameras officers wear, which are $800 each according to Doan, as well as software, storage of footage and other related expenses.

Determining how many officers are hired by the department is based on several factors, according to Doan, which include call volume for the department, as well as the available budget. He said to increase the number, the department’s leadership would have to show the need to city officials.

A new candidate will go through many steps before being hired, including written and physical tests and being interviewed by a panel of officers and supervisors. Next the candidate receives an extensive background check and suitability screening. Doan said these steps all take place before a potential officer is ever interviewed by Gray.

“Then you have to interview with the chief. Just because we pass you on from the panel doesn’t mean he’s going to hire you,” Doan said.

If Gray does approve an applicant, they then go for a polygraph, or lie-detector test. Doan said it is not common, but applicants have done well in all interview and testing procedures, only to get bad results from the polygraph exam, which can raise red flags and point out other issues.

If applicants survive all of the steps, Doan said they would then be scheduled for the police academy, which is a 20-week process. New officers spend those weeks at the academy in Richmond, but they are permitted to come home on the weekend, reporting back to the academy on Sunday.

After completing the academy, Doan said Danville officers then go through an additional 10-week field training period where they are assigned to a senior officer. He stressed that this is not required, but is a step taken by the Danville Police Department to help make sure officers are as prepared for the job as possible.

“Technically, you could hire an officer, swear them in, put them in a car, give them a gun and say, ‘Have at it!’ for a year before you send them to the academy. We’ve not done that and will never do that because that’s not the best practice when it comes to hiring and training people,” Doan said.

Throughout the field training period, Doan said the new officer is constantly tested and evaluated, ensuring they are learning the skills necessary. Each officer must complete a test at the end of the 10 weeks of training that includes a battery of scenarios that include traffic stops and mock calls for service. After completion of all of these steps and processes, officers can then be out on their own.

Again, Doan said this is the policy of the Danville Police Department, and not a requirement from any state agency.

“It’s not required. There are departments that when you walk out that door at graduation, the very next night you are in a car by yourself on patrol. We are constantly training and making sure our officers are prepared,” he said.

Once officers begin work at the Danville Police Department, they will be busy. In 2019, the department had more than 14,000 events of police activity between calls for service and self-initiated activity, such as traffic stops. Officers made more than 1,000 arrests last year, and they completed more than 1,800 citations for criminal and non-criminal offenses. They also conducted 2,625 traffic stops, responded to 750 alarms, 520 domestic incidents, and 552 drug/alcohol related calls. Danville officers also completed 916 collision reports and responded to 586 property crimes. From these incidents, officers completed 1,960 reports, according to Doan, and he said the department is on pace to exceed those statistics in 2020.

All of these things are in addition to other things officers do, including time spent training, serving during funerals, local festivals and events like 5K races and much more. Doan said despite what some people often ask, there is no charge for police officers to assist with funerals.

“That’s a national average, so we take that with a grain of salt,” he added.

According to the Department for Criminal Justice Training’s 2018 comprehensive survey, the average salary for an entry-level peace officer was $33,429. Locally, an entry-level Danville Police officer earns $25,875, with the least experienced officer currently on the streets with academy training for the department making $13.80 per hour, which is $28,704 yearly before any incentives. Officers receive a state incentive of $4,000 annually for being certified and keeping up with their annual training. Doan said the incentive comes at no cost to the local department or local government.

When asked about overtime for officers, Doan and Gray explained that it is based on need. There have been several recent burglaries in the city, and Doan said officers are permitted to work overtime to help patrol the community. He listed several area businesses and churches that have been broken into in the past week.

“Right now, during third-shift hours, if you want to come in and do extra patrol in all of these locations, we approve that. We actually had an arrest with one of them yesterday and we have identified another suspect. That’s really time-consuming right now, and we’re trying to throw as much at it as we can, approving those type of things, and the city is really good for allowing us to have a pretty good overtime budget. They understand that if every officer just works 80 hours a pay period, all of that stuff we’ve talked about, that’s not going to get done – not and do the things that we need to do to stop and prevent crime,” Doan said. “We’ve got a lot of dedicated men and women here that do a heck of a job. It’s like Chief always says, I’d put our 33 up against anybody. And they do it because they love it.”

Week 2 of the 2020 Danville Police Citizens Academy is scheduled to include information about police dispatch, as well as the equipment used by officers, along with demonstrations.