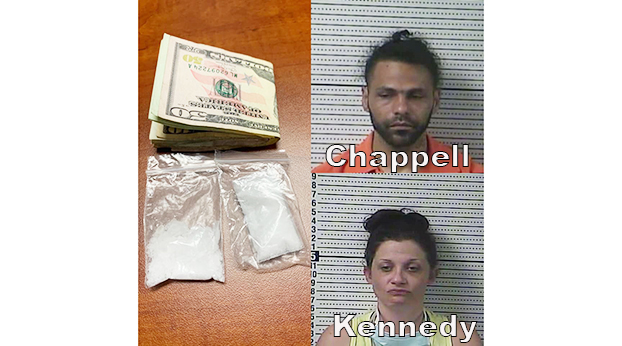 A traffic stop Thursday night led to the discovery of drugs, as well as a subject wanted on a previous warrant.

Deputy Wren of the Boyle County Sheriff’s Office stopped a vehicle on US 127 in Danville around 9 p.m. Thursday and discovered that one of the two subjects in the vehicle, Allison Kennedy, had an active warrant for her arrest.

The passenger in the vehicle, Alanda Chappell, admitted to having two bags of methamphetamine concealed on his body, and he gave it to Deputy Wren. The two bags weighed approximately 1/2 ounce (14 grams). Both subjects were taken to the Boyle County Detention Center, where they were being held as of Friday afternoon.

Kennedy was charged with a bench warrant for non-payment of fines. Chappell was charged with trafficking in a controlled substance, 1st degree, 1st offense (less than or equal to 2 grams of methamphetamine).