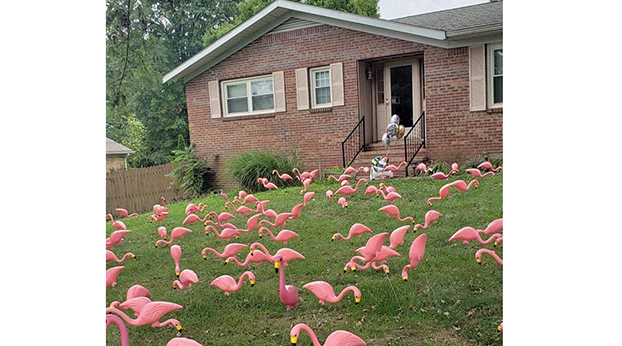 he Boyle County Boy Scouts of America put about 100 flamingos in LeAnn Moore’s yard for her son, John Patrick Lee Shambo. He had recently had several procedures for some health problems.

LeAnn Moore got a call from her son’s father, who was home with their 15-month-old son, John Patrick Lee Shambo, when she was at the grocery store one day, and he had some interesting news. There were scouts in their yard putting out a large number of plastic pink flamingos. Moore was confused and asked what he was talking about, and then, expecting to see perhaps 10 or 15 flamingos, she turned the corner on her way home and was greeted by about 100 of the bright pink birds.

“And I was like, holy cow,” she said with a laugh.

The Boyle County Boy Scouts of America, both the boys’ Troop 119 and the girls’ Troop 2, had flocked the yard. Moore said her son, JP as she calls him, had been struggling with some health issues and had several procedures done and needed a body cast after one of them. He wasn’t feeling well, and Moore’s cousin, Shawn Rousey, had heard about the flockings, which were for a fundraiser for BSA, and called the BSA about pricing. When BSA got the call, they decided to do it for free, put 100 birds out instead of 10 or 20 like normal, and also got JP some balloons and a blow-up pink flamingo. Moore said when JP saw the flamingos, his little face lit up.

“His face — you couldn’t have given me a million dollars for the look on his face when he saw all that, because his face, it was just pure, angelic innocence, where he was just genuinely so happy,” she said. “And when you don’t feel good and you have all this stuff going on and something so small or what people might think is so just trivial can make your day, make everything seem OK, even if it’s for 20 minutes.”

The experience meant a lot to Moore, too.

“It meant the world because when everything seems to be going so crappy, the little things really matter, and, I mean, in this day and age, you don’t get to have all the feel-good stories,” she said.

BSA left the flamingos out in Moore’s yard for about two days, and when they picked them up to pass them along to different yards, Moore came out to talk to them. To her, the troop leaders were genuinely sweet and seemed to care deeply about the children in their troops. Moore said when JP gets to be old enough, she definitely wants to consider him joining BSA.

Anna Gomez, assistant scoutmaster for troop 119 and scoutmaster for troop 2, was one of the leaders Moore spoke to. Gomez said the idea for using flamingos to flock people’s yards as a fundraising strategy came in the midst of the COVID-19 pandemic, when, due to COVID-19, the troops couldn’t have their spaghetti dinner fundraiser, which had its 50th anniversary last year. So they had to improvise, which Gomez said showed the children that no matter what problems are around, there’s always a way to work around it, and there are other solutions. Gomez found out about flocking online, and a woman told her how to do it.

Troop 2 formed at the beginning of the year, and they had only been able to meet twice before the pandemic hit businesses and organizations in the U.S., so Troop 2 has just two girls in it, whereas troop 119 has about 15 boys in it. Gomez said they are looking for more girls to join Troop 2, which girls ages 11 to 17 can join, and people can contact her at 859-583-6991 about joining the troops. It’s a great opportunity for children to get involved with outdoor activities like hiking and canoeing, she said. Lately, the scouts from both troops meet in Millenium Park, sit in chairs six feet apart and wear masks, so they’re still active.

For the fundraising aspect of flocking, BSA charged $10 for 10 birds and $20 for 20 birds, or according to the amount people wanted to pay. BSA bought the birds and also borrowed more birds from a local church for a total of about 340 birds, so often they had 10 to 15 yards or businesses flocked at a time. The first day of flocking was Aug. 1, and the last day was Sept. 10. When people’s yards or businesses got flocked along with signs that read, “You’ve been flocked,” they could pay to pass it along anonymously to flock someone else. They got letters explaining how it worked and what to do. Gomez said BSA took pictures in every yard and at every business so if someone wanted a picture of the person’s yard they chose to flock, they could give it to them.

“It lifted spirits up, and it’s brought smiles to a lot of people,” Gomez said.

Gomez has a plethora of anecdotes about funny or touching flockings. One woman whose husband died a couple of years ago was sad because their anniversary was coming up, so BSA flocked her yard with 100 birds. Another woman who had just had chemotherapy treatment, got flocked and thought it was wonderful. One man said it was his worst day at work he had ever had, and he came home to 20 birds.

“He said ‘I laughed so hard I almost cried,’” Gomez recalled.

The stories go on. A woman sent BSA a photo of her two dogs watching the scouts flood the yard with flamingos as they wagged their tails. BSA put out 100 birds for an 82-year old woman in Parksville after they had put out 20 the first time and it made her so happy that her family pitched in money to add 100 to her yard. A man was tending to his rabbits in his backyard, and the scouts put flamingos in his front yard without him noticing. And the scouts, Gomez said, loved flocking — they enjoyed sneaking the flamingos into yards and spreading joy.

“It was a positive spin when right now, there’s not a lot of positivity out there,” Gomez said.

And the fundraiser had a wide scope, Gomez said. They planted flamingos in yards in Danville, Perryville, Junction City and elsewhere.

“It was a good thing because when everything else was so humdrum, you walk out and find 20 or 10 pink flamingos in your yard, it couldn’t hurt to make you smile, and then to know that a bunch of scouts went and did it while you didn’t notice was even better,” Gomez said with a laugh. 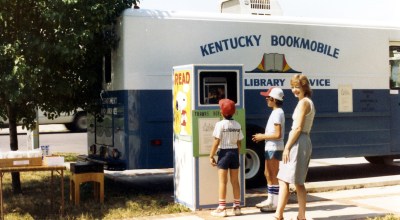