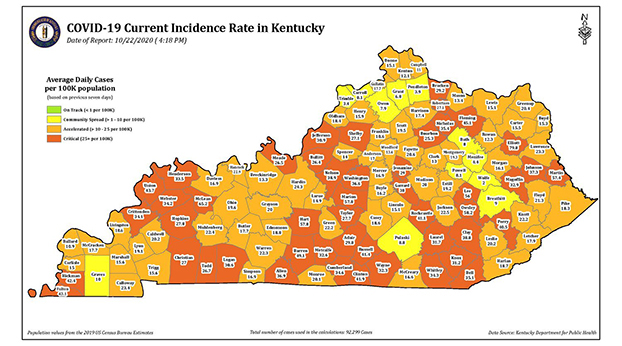 Gov. Andy Beshear said Saturday’s COVID-19 report is, “in a word, frightening, ” with 1,738 new cases, prompting new recommendations to be announced on Monday.

The governor said it was Kentucky’s highest day of newly reported cases by a significant margin, except for Oct. 7, when a large backlog of 1,472 cases from Fayette County were added, raising the total to 2,398 overall.

“This is exploding all over the country,” he saidr  “Yesterday was the highest amount of cases ever reported in a single day in the United States.  We’ve got to do better, and on Monday we’ll be talking about new recommendations to counties that are in the red.  We’ve got to tamp down these cases.  The more cases, the more people that end up in the hospital and the more people die.”

A map showing the color-coded counties accompanies this story.

The counties with the highest number of new positive cases reported to state public health officials on Saturday: Jefferson with 390, Fayette with 86, Elliott with 74, Shelby with 63, and Kenton with 57.

Kentucky’s pandemic total of positive cases of the coronavirus now stands at 95,480, since the first case was reported on March 6.

There were also eight new deaths Saturday, bringing the total number of Kentuckians now lost to the virus is 1,404.

“That’s eight additional families who are suffering during this time,” Beshear said. “Do what it takes to protect your neighbor, to protect their life. That’s what we’re fighting for now, life and death.”

“We’re all tired of COVID-19 and the problems it has brought,” said Dr. Steven Stack, State Public Health Commissioner.  “People are hurting, whether from the virus itself or the impact it has had on the rest of our lives.  It’s all worse, though, when we don’t do simple things like wearing masks and socially distancing.  As October comes to a close, please be kind to each other and remember that we help each other, and ourselves, when we focus on defeating the virus rather than arguing with each other.”

After finishing quarantine on Saturday, Beshear says he plans to resume doing his press briefings in the Capitol Rotunda on Monday afternoon at 4.  He and his family underwent a 14-day quarantine after a member of his security detail tested positive for COVID-19 earlier this month. 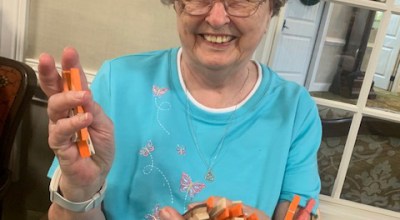