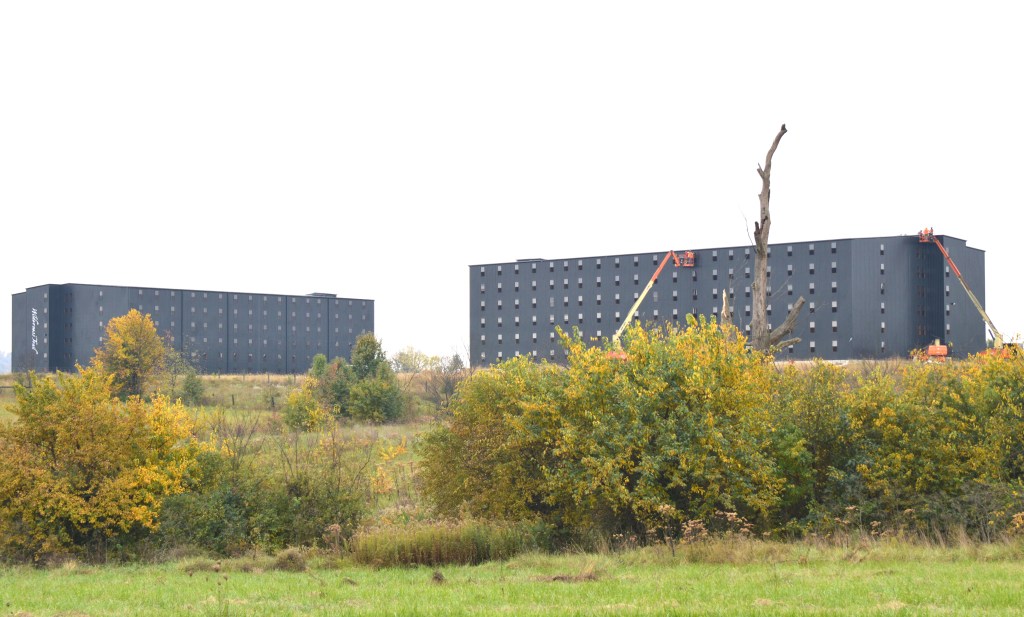 Wilderness Trail Distillery has property in Boyle County’s industrial park, and EDP President/CEO Jody Lassiter said it continues to grow. The food and beverage industry is one industry that would be beneficial to expand in the county, Lassiter said. “I would say that even though we’re focused on bourbon distilling and aging, that’s really part of a larger food and beverage manufacturing sector that we think that we have very, very strong capabilities by virtue of the City of Danville’s water and sewer capacity, and ability to serve that food and beverage manufacturing and processing can be a very lucrative market for us to continue to market and explore,” Lassiter said. (Olivia Mohr photo)

There are zero new and expanding location announcements for economic development in Boyle County so far in 2020, for January through October, according to the Kentucky Cabinet for Economic Development in data provided by the Danville-Boyle County Economic Development Partnership at an EDP meeting on Oct. 21. This is in comparison to the four new and expanding location announcements the county saw in 2019.

Across the board in Kentucky, the COVID-19 pandemic is having an impact on economic development, said Jody Lassiter, EDP president/CEO. According to the data provided by the EDP pulled from the Kentucky Cabinet for Economic Development, Kentucky saw 235 new and expanding location announcements in 2019, while in 2020 so far, there are only 80.

One announcement in Boyle County from last year was a manufacturing extension for Hobart Services, which provides commercial kitchen warewashing equipment manufacturing, to add 16 jobs and be a $123,282 capital investment. Lassiter said this project was completed last year.

There were two announcements last year pertaining to manufacturing expansions for Meggitt Aircraft Braking Systems Kentucky. One was completed by July 1, 2019, Lassiter said, a nearly $7.9 million capital investment with 45 additional jobs. The other announcement is a project currently on hold, he said, a 95,000-square-foot addition to the main carbon operations facility at 190 Corporate Drive with an approximate $82.7 million capital investment and 83 additional jobs. The facility exterior is complete, Lassiter said.

“However, in April, the project expansion was suspended due to the impact to the commercial airline industry,” Lassiter said.

The project has been impacted by turmoil within the Kentucky hemp industry, Lassiter said, as several hemp processors or companies either declared bankruptcy, as according to a Jan. 29 Lexington Herald-Leader article happened to GenCanna, one of Kentucky’s largest hemp companies, or had difficulties having a legal THC level, causing product produced to become unsellable. Because of those roadblocks, the project is on hold, pending the outcome of the Kentucky hemp industry, Lassiter said.

Lassiter said things are always slower during presidential election years because companies are looking to see what political philosophies are going to be in charge, but that slowness is multiplied by the pandemic.

That being said, Lassiter said the EDP is taking efforts to make the county more attractive for businesses to come and grow here.

“My philosophy is always in the middle of a downturn to prepare and make some of the decisions and investments that will make us attractive when businesses start flowing and making more business decisions going forward,” Lassiter said.

One of those decisions is the recent development of a Kentucky Build-Ready Site in the county’s industrial park, which the Advocate-Messenger has previously reported on. The project is funded by the Boyle County Industrial Foundation, a partner of the EDP. Lassiter said there is a 100,000-square-foot prepared pad for the site and there will be a building design and some initial permitting and planning completed to make a project move more quickly to be able to construct at the location. Both the pad and the 17.9-acre tract it’s on can be expanded to adapt to businesses’ needs, Lassiter said, and the location is already zoned as industrial.

One issue the pandemic has presented is that site visits and community visits by businesses have halted because they can’t be in person, so many of these visits are being done virtually, Lassiter said. This applies to the building pad — drone footage and aerial photography are being utilized to show the pad to potential prospects, and a rendering of the design of the building that will be on the pad has been provided. Lassiter said there is a new prospect resulting from the listing of the property as a Kentucky Build-Ready site.

Lassiter said when it comes to the site, several industries would be beneficial to Boyle County that he thinks would thrive here: the automotive industry due to the county’s centralized location as an off-interstate community, distribution logistics for the same reason and food and beverage manufacturing due to the City of Danville’s water and sewer capacity.

Because small businesses are in a tight spot, Lassiter said the City of Danville has discussed small business relief efforts, which City Manager Earl Coffey confirmed. Coffey said the city is investigating alternative forms of relief or aid and has applied for, been approved to receive and subsequently submitted for reimbursement is allowed and is awaiting relief funds. He said the city does not have a time frame but anticipates them soon.