No indoor pool, no problem 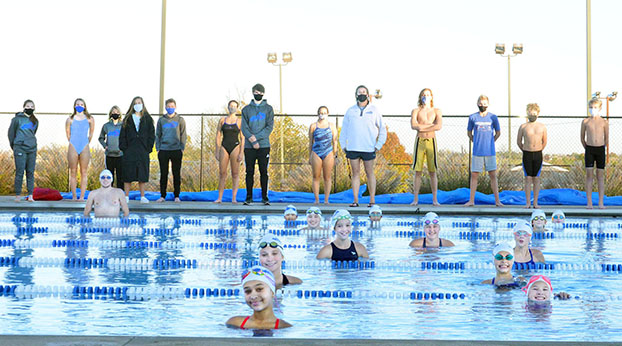 Members of the Commonwealth Swim Club, many who also swim for Danville, Boyle County, Garrard County and Danville Christian Academy schools, pose at the Danville Country Club pool Wednesday night during their practice. The swimmers plan on practicing in the pool all throughout the winter. - Photo by Robin Hart

Every high school sports team is having to cope with a lot of COVID-19 related changes. It’s just the new normal if coaches and athletes want to have sports seasons.

However, what several local swim teams and coaches have planned in order to have a 2020-21 season is way out of the ordinary and far different from what other athletic teams are having to deal with. They’ve decided to practice in an outdoor pool all winter. 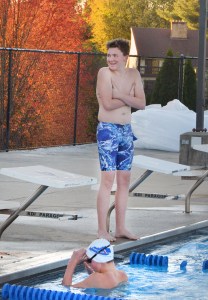 Cole Hardwick, who swims on the Commonwealth Swim Club and Garrard County High School teams, waits for his turn to jump in the lane and swim laps. -Photo by Robin Hart

Swimmers on the Swordfish U.S.A. Commonwealth Swim Club team, along with teams from Boyle and Garrard high schools, Danville High School and Danville Christian Academy will practice at Danville Country Club the next four months when there will obviously be freezing temperatures on a regular basis.

The pool will be heated to between 78 and 80 degrees. When not in use, pool covers will be spread over the water to help hold in some of the heat. Several heat blowers, similar to ones used on the sidelines of football games, have been purchased and are on the pool deck to help swimmer keep warm when they’re out of the water. And a small events type of tent has been put up right behind the diving board. Competitive divers can stay in the water to keep warm and will have the protection of the tent while waiting to compete.

Commonwealth coach Tasha Singleton, also coaches the Danville and Garrard County teams. She said, “I’m dedicated to making this season work because I have swimmers who are clearly dedicated to their sport. What heart they have to fight the elements to keep swimming all year long. We lost part of our season last spring, so these kids are tougher and willing to fight to keep this season alive.”
Singleton said, “I’ve never coached outside in Kentucky in the winter, but I’m willing to do it for these kids! I may have to jump in the water to stay warm vs. staying on the cold pool deck, but we will get through it together and be a better team for it.

Singleton said the club’s season was cut short right during the time of the Kentucky State Timed Trials. “Having their season cut short … gave them grit to fight their way back this year to have a season. … I definitely think this will make them stronger swimmers.”

Plus, swimming in an outdoor pool “is just safer,” Singleton said. “With COVID and all the unknowns, we just want to keep the kids safe. We know we are safe swimming in the chlorine and this way we know their air is safe too.”
Swimming in an uncovered, outdoor pool throughout the winter months in Kentucky may seem brutal, but it’s not unheard of, said Julane Hamon, whose 12-year-old son is on the Swordfish team. She said there are teams in Colorado who swim outdoors year-round because the water temperature is warmer than the air temperature.
They say swimming outside in the fall and winter makes better swimmers, she said.

Her son Luke had to quit swimming in March when the area pools shut down because of the pandemic. His first time back in the water was on Monday and she asked him if he felt better after swimming again. He answered, “My soul is back!” For dedicated swimmers, “This is their thing,” she said.
Boyle’s swim coach Crystal Ellis said about her team, “I think most kids are determined to fight through the cold and will definitely have some bragging rights that they are committed, motivated, and gutsy to swim outside.”
Boyle County High School senior Creed Farthing, who swims for both BCHS and Commonwealth, said, “This is a challenge that needs to be taken. … We are strong-willed.” 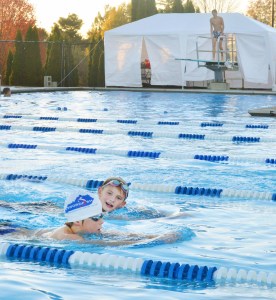 Swimming is a very demanding sport, Farthing said. “There’s a lot of mental work.” But since the pool temperature will be set between 78 and 80 degrees, “The water’s not that bad.” He said the hard part will be stripping down in the cold to get into the pool and getting out after practice. “We’ll get out and go!” he said laughing.
Katie Heath is a senior who swims for Danville and the Commonwealth club. “We’re so happy we have somewhere to swim,” she said before practice Wednesday evening. “It’s a great pool.” And swimming outside on nights when there may be snow swirling around, “It will be a different experience, that’s for sure,” she said.

Heath added that “not in a million years” would she have imagined they’d be swimming outside this fall and winter. “We’ll get toughened up. We’re used to be being cold inside anyway.”
Singleton said the country club’s general manager and COO, Mark Farrell, is allowing Commonwealth Swim club to use the pool rent-free.

“Mark Farrell, the general manager, has a heart for the swimmers. He comes out and checks on the water to make sure it is warm and makes sure the team is doing OK. Mark and the club have been very generous to all of our swim teams.”

She added, “We cannot begin to thank the country club enough. Without them, Commonwealth wouldn’t have a swim team this season. Not to mention, Boyle, Danville, Garrard, and DCA wouldn’t have a swim season. We owe them so much to let us use their pool all season like they are.”

But, they will be responsible for paying the electric bill to heat the water. Harmon estimated it was going to cost about eight times more than what they paid Centre College to use its pool, which they can’t because of the college’s strict COVID-19 restrictions.

Her “really good educated guess” is that it’s going to cost about $4,000 each month to heat the pool, she said. The school teams are paying Commonwealth for the use of the outdoor pool, just as they do Centre and Ephraim McDowell Wellness Center’s pools, Harmon said. “They’re doing their part.”

But it’s going to be expensive, she said. To raise extra money for the swim teams to be able to practice outside this winter, Commonwealth is hosting a golf scramble on Saturday, Nov. 21 at the Danville Country Club, along with Boyle and Garrard county and DCA teams. And the country club is donating the use of the course for the fundraiser.
Ellis said, “We figure if we can swim in the cold, golfers can play in the cold.” 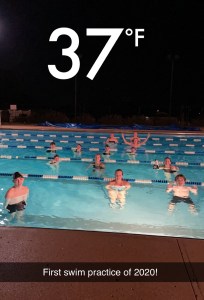 Members of the Boyle County Swim Team pose for a photo at the Danville Country Club pool on the night of their first practice of the season. The temperature was 37 degrees. (Photo submitted by Crystal Ellis) 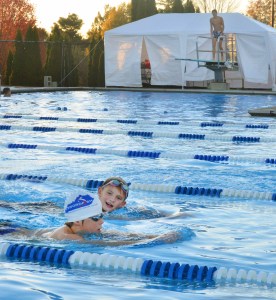 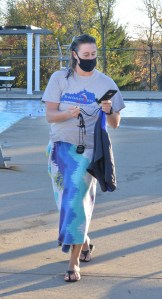 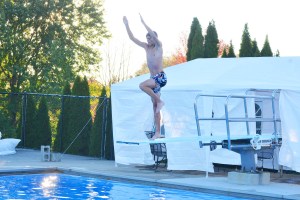 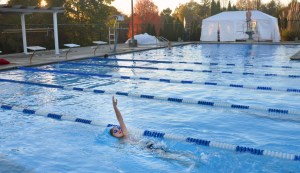