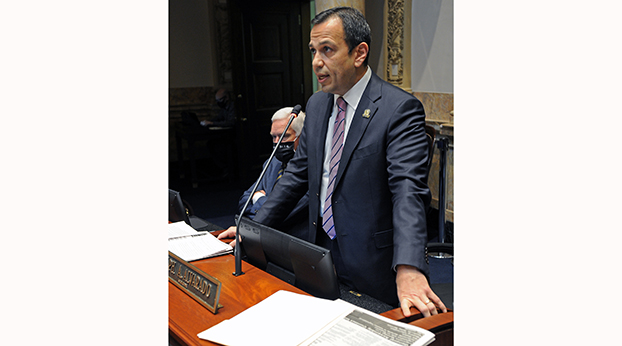 FRANKFORT, January 9 -- Sen. Ralph Alvarado, R-Winchester, presents House Bill 1, a bill relating to the reopening of the economy, in the Senate.

The General Assembly gave final passage today to legislation relating to the reopening of Kentucky’s economy in response to the governor’s state of emergency intended to stop the spread of COVID-19.

The measure, known as House Bill 1, passed the Senate by a 28-7 vote shortly after it was amended in committee. The House of Representatives went on to concur with the Senate changes.

“The governor gave orders and changes that were often arbitrary and lacking on the basis of studies,” said Sen. Ralph Alvarado, R-Winchester, who carried HB 1 on the Senate floor. The primary sponsors were House Speaker David Osborne, R-Prospect, and Rep. Bart Rowland, R-Tompkinsville.

“Decisions were often made that were uneven in their application, decisions that produced confusion and anger, economic destruction, instability and division. COVID-19 has created economic hardship unlike anything we have ever seen,” Alvarado said. “While Kentucky has weathered recessions and economic downturns in the past, in 2020 businesses endured challenges brought about by policy intended to stop the spread of COVID-19.”

He said HB 1 would allow any business, local government or school to remain open as long as it obtained and followed an operational plan that met or exceeded applicable Centers for Disease Control and Prevention guidelines or executive branch guidance, whichever was least restrictive.

A second provision would waive penalty and interest on late unemployment insurance taxes to give employers more time to pay.

“We don’t want this tax bill to be the final straw that forces a business or organization under,” Alvarado said while explaining how those taxes will go up because of the spike in unemployment. “Not only will that lead to more job losses and economic strain, but unemployment insurance costs incurred by employers that go under will ultimately be covered by remaining employers in the system.”

The third provision of HB 1 would prohibit Kentucky’s Cabinet for Health and Family Services from suspending valid existing court orders providing for the in-person parental visitation of children in state custody or foster care. It would also require the cabinet to develop guidelines regarding the visitation policies for long-term care facilities and to terminally ill individuals.

Minority Caucus Chair Sen. Reginald Thomas, D-Lexington, said HB 1 would impede the chief executive of the state at a time of crisis. “This is totally unacceptable,” he said of HB 1. “We are, again, going in a direction that is not healthy, not wise and not prudent for the people of this state.”

Sen. Christian McDaniel, R-Taylor Mill, said he had the utmost respect for Thomas but had a different view.

“I’ve talked before about the nature of Frankfort and the nature of government towns because we come in and walk marble halls, pass well-manicured lawns, around people who are designed to facilitate the needs of the legislative process … and we lose track of the people that don’t – the people that drive concrete trucks down muddy, sloppy gravel roads to build our houses,” said McDaniel, who owns a concrete contracting company. “We lose track of day care workers who clean up when little kids throw up on the carpet. We lose track of 2,600 kids in a public school system because they haven’t been there since March. We lose track of foster and adopted services and what’s going on with kids inside of there.”

In reference to an opinion that HB 1 was moving through the legislative process too fast, McDaniel said there had been a “tremendous outcry” from Kentucky citizens for relief from the state of emergency. He said many didn’t understand Kentucky has a part-time legislature that couldn’t act when it wasn’t in session.

“That’s why I come – for the people who work every day to make things just a little better for themselves and their families,” he said. “Not just to speak up for them but to speak up for those who we don’t hear from. I truly believe in my heart … our job is to protect those on the margins.”

McGarvey said he couldn’t vote for HB 1 because there was another way to get schools and businesses open across Kentucky.

“We do it by forcing social distancing and getting a vaccine out there, but I haven’t seen any legislation come through this body to help with the distribution of a vaccine,” he said. “We haven’t even talked about it.”

“Yes, the governor is responsible for trying to keep the citizens of this commonwealth physically safe,” he said, “but in addition, we need emotional safety. We need financial safety. We need that balance of all those pieces.

“This legislation is in response to frustration, anxiety, fear. Is it perfect? I doubt it. Are the goals laudable? They are.”

HB 1 now goes to the governor. He has 10 days to sign it, let it become law without his signature or veto it.

Marshall Carrier began his job as Danville’s new utility director on Monday, Jan. 4. He said he has “roots” in... read more