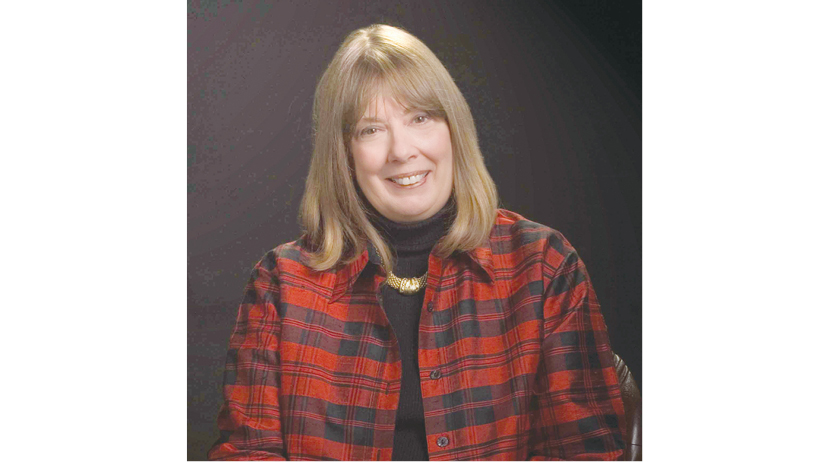 The 2020 Arts Citizen of the Year is local playwright, director, and producer Elizabeth Orndorff.

The Arts Commission of Danville/Boyle County will formally present Orndorff with the award — an original glass piece created by local artist Roni Gilpin — during the Danville City Commission meeting on Jan. 11 which will be aired on the city’s website and social media.

Arts Commission Director Mimi Becker said in an email that recipients of the annual award are chosen for more than just one single year of work supporting the arts. “In general, we consider the full range and years of their service to the community.”

“Liz was chosen for her talents, not just as a playwright and the awards she has received for that work, but also for her foresightedness in founding the Scarlet Cup Theatre, a truly unique and innovative approach to theater, especially in a community of this size.”

Orndorff said she was “totally shocked, but really happy,” when she learned she was named the 2020 Arts Citizen of the Year. “I really appreciate it.”

Orndorff said during the past 10 months she hasn’t done any writing. “It’s been a nice break.” She said she didn’t have the skills, and especially no interest in writing virtual plays for a virtual audience.

“I don’t want to look at a box and see a lot of faces,” performing a play, she explained.

What she has been doing while confined at home during the pandemic is cleaning out closets, she said laughing. But even though she’s not currently working on a writing project, the arts have also helped get her through the long days.

“I’ve been reading a ton and watching a lot of old movies,” Orndorff said. “If we didn’t have books to read and movies to watch, which are works of art, we would really be up a creek.”

She said, “Danville is a great community for the arts of any sort. It’s a very nurturing community.”

Before becoming a playwright and fiction author, Orndorff worked in the advertising, public relations and publications production fields, according to the Commission’s news release.

She earned degrees from Grove City College in Pennsylvania, University of Georgia, and University of Kentucky, where she taught journalism and studied intercultural communication.

Her play “Death by Darkness,” set in 1842 at Mammoth Cave, won the International Mystery Writers Festival in 2007 and the Southern Playwrights Competition in 2008.

In 2009 she studied with Lee Blessing at the Sewanee Writers’ Conference, partially funded by a Kentucky Arts Council Award.

She won a Wurlitzer Foundation Fellowship to live and write plays in Taos, New Mexico, from January through April of 2010. And in 2012 she spent a month in Northern Ireland on an artist exchange fellowship sponsored by the Sister Cities Commission of Danville.

From 2010 to 2016 at the medium security prison, Northpoint Training Center, Orndorff taught playwriting and started a men’s chorus. Several of her inmate students have also won national awards for their playwriting talents.

In 2016, Orndorff was instrumental in founding the site-specific Scarlet Cup Theater in Danville to present new and international work. Ordorff has served as the chairman of the Scarlet Cup board, and directed and produced its plays at various venues.

“The Arts Commission is very proud that Liz was the author of the first three plays commissioned and produced by the Arts Commission in collaboration with the Agency for Substance Abuse Policy,” Becker added. This series of plays and musicals for middle- and high-school students for Danville, Boyle County and Burgin schools were designed to encourage students to think about the opportunities and challenges in their lives from fresh and creative angles and were presented free of charge, according to the release.

“Liz’s gift for telling a story, which also carries a message, made these events special and thought provoking for students,” Becker said.

Orndorff’s fifth play in her comic “Hollerwood” series for West T. Hill Community Theatre titled “Babe Dean and the Great Pendamic,” was originally scheduled to go up in March, but several conflicts and the pandemic caused the production to be rescheduled at a later date.

She lives in Danville, Kentucky, with her husband, Robert.

Becker said the award has been given to local artists and art supporters since 2004.

“Recipients have been selected across a broad spectrum of contributions to the arts including activism, volunteerism, creativity, community presence, financial commitment and community awareness,” Becker said.